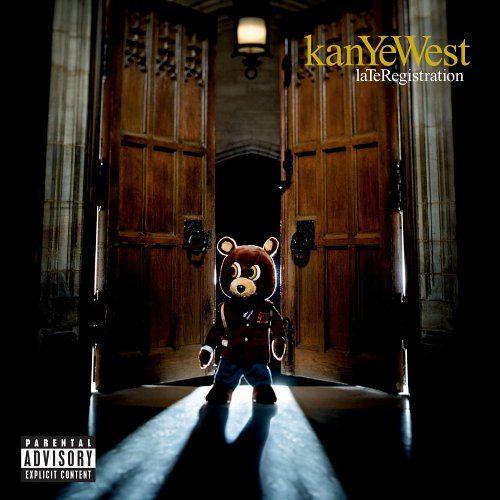 “So they asked me, why you call it ‘Late Registration’ Ye?
Cause we takin these muh’fuckers back to school!”

The Grammy Awards can be both a gift and a curse to hip-hop artists. That’s not the message Kanye’s fellow Roc-A-Fella artist Jay-Z had in mind back in 2002, but he better than anyone else would understand Kanye’s dilemma. At one time the budding hip-hop mogul actually threatened to boycott the Awards ceremony when his third album was nominated, and in doing so pointing out that deserving rap artists had gone unrecognized for years. Ironically he won that year’s “Best Rap Album” category anyway, and showed up to accept the trophy. Still what may have hurt Shawn Carter the most was not the apparent contradiction of going to accept the award but the award itself. For many rappers it’s the pop culture kiss of death. Did anybody take Naughty By Nature seriously after they won for “Poverty’s Paradise?” Don’t you believe it went to OutKast’s head after “Stankonia?” (Well Andre’s head at least, with his wannabe-Prince ass.) It certainly did after The Fugees won for “The Score,” as they haven’t released a new studio album since. The relationship between hip-hop and the Grammy’s has been fractious at best. Both the industry and the fans have questioned why in an era where Rakim, KRS-One, Ice Cube, Nas and Public Enemy all recorded classics, the winners for Best Rap Performance were MC Hammer, Coolio and Sir Mix-A-Lot. While all relevant in their own way, they certainly didn’t represent the highest echelon of the music as an artform, let alone the best work the culture produced in the year of that award ALONE. Perhaps P.E. put it best when they said “Who gives a fuck about a God damn Grammy?”

And yet uber-producer and multi-platinum rap recording artist Kanye West seemed to very MUCH give a fuck about the God damn Grammy. Nominated for ten different awards in 2005 after achieving major crossover success with his national debut “The College Dropout” and producing for other nominated artists like Alicia Keys and Janet Jackson. Instead of being happy when he won for both Best Rap Album and Best Rap Single, Kanye seemed to get a chip on his shoulder which was unceremoniously knocked off at the American Music Wards when Gretchen Wilson won the Best New Artist category. His quote about losing to a country singer was “I was the best new artist this year, so get that other bullshit out of here […] I don’t know if I’ll be back next year.” Open mouth, insert foot. The Grammy curse seemed to be in full effect, as Kanye was making a fool out of himself and sounding anything but gracious towards the winner. In fact he probably perpetuated the long-standing stereotype that rappers and rednecks don’t get along, despite the fact many of rap’s top artists have been and continue to come from the South, let alone that Nelly and Tim McGraw collaborated for the chart-topping hit “Over and Over.” Apparently the fact he acted like an ass wasn’t lost on him, as he even makes reference to it in “Diamonds From Sierra Leone,” the first single off “Late Registration”:

“I was sick about Awards, couldn’t nobody cure me
Only player that got robbed and kept all his jewelry
‘licia Keys tried talk some sense in him
Thrity minutes later seen there’s no convincin him
What mo’ could you ask fo’
The international asshole
Who complained about what he is owed
And throw a tantrum like he is three years old
You gotta love it though…”

I’m not sure I’d say I love it, any more than I love Terrell Owens for whining about only making seven million. I don’t love it when the wrong rappers win awards, and I don’t love it when the right ones do and it goes to their head and they start acting stupid and recording bad music. At least the latter is not true on “Late Regisration,” let alone the track in question. Through clever sampling of the Shirley Bassey song “Diamonds are Forever” from the James Bond movie of the same name, Kanye won me back into his good graces. Kanye’s lyrics, like the man himself, are a study in contradiction. The title of the song itself is a reference to the “conflict diamonds” of the African continent, where warring factions struggle to control the lucrative diamond trade while wealthy consumers elsewhere remain blissfully ignorant of the bloodshed that went into making their bling bling chains and iced out rings and watches. Kanye addresses this issue more directly on the “Remix” featuring Jay-Z, and in doing so illustrates his contradictory nature perfectly:

“+Good Morning+, this ain’t +Vietnam+, still
People lose hands, legs, arms, fo’ real
Little was known on Sierra Leone
And how it connect to the diamonds we own
When I speak of diamonds in this song
I ain’t talkin ’bout the ones that be glowin
I’m talkin ’bout Roc-a-Fella, my home
My chain, this ain’t conflict diamonds
Is they Jacob? Don’t lie to me, man
[…]
People askin me is I’m gon’ give my chain back
That’ll be the same day I give the game back”

That’s Kanye for you. Gracious at the Grammy Awards, petulant at the AMA’s. Aware that people are killed for the diamonds he wears, but unrepentant about wearing them all the same. The overly simplistic answer would be that like the opening quote of this review from “We Major” featuring Nas, Kanye is an ingorant muh’fucker who needs to go back to school. Then again you can’t really say a man who records a song like “Jesus Walks” is an ignorant muh’fucker, let alone that Kanye has gone on record as one of the few hip-hop artists to speak out against the pervasive and at times outright offensive homophobia in hip-hop music. It’s telling that TRUE ignorance surfaced after that comment, as many of the people who still respected Kanye after all of his other antics suddenly thought West might be “funny” and weren’t sure if they could support him any more. Frankly anyone who feels that way might as well not even bother to get a late pass for “Late Registration,” as they really don’t deserve to enjoy the dopeness of his beats and rhymes on tracks like “Touch the Sky”:

“Back when Gucci was the shit to rock
Back when Slick Rick got the shit to pop
I’d do anything to say I got it
Damn, them new loafers hurt my pocket
Before anybody wanted K-West beats
Me and my girl split the buffet at KFC
Dog, I was having nervous breakdowns
Like “Man – these niggaz that much better than me?”
Baby, I’m goin on an airplane
And I don’t know if I’ll be back again
Sure enough, I sent the plane tickets
But when she came to kick it, things became different
Any girl I cheated on, sheets I skeeted on
Culdn’t keep it home, thought I needed a Nia Long
I’m tryin to right my wrongs
But it’s funny them same wrongs helped me write this song”

Contradictions. You gotta admit, contradictions are what make for great drama. It’s why people kept watching the news reports about Terry Schiavo long after it should have been a dead issue, no pun intended. People kept trying to understand the contradictions – if her parents care so much about her, why can’t they just let her die in peace? If her husband cares so much about her, why is he so willing to let her die? Whatever side you were on, there was a contradiction between the stated position and the reality of the situation. Kanye’s life and his lyrics both reflect that duality, and what’s truly amazing about the whole thing is that for years people didn’t think he “had a rap” at all – he was just the guy who made everybody else’s rap sound better. “Through the Wire” may have shocked people at first, but it proved the brother had a rap. Then “Slow Jamz” made the people dance and proved that Jamie Foxx was a multi-faceted performer in his own right. Now he’s back for one mo’ go around on Kanye’s latest hit single “Gold Digger” and once again it’s a study in West’s contradictions:

“Now I ain’t sayin you a gold digger you got needs
You don’t want a dude to smoke but he can’t buy weed
You go out to eat he can’t pay, y’all can’t leave
There’s dishes in the back, he gotta roll up his sleeves
But – while y’all washin, watch him
He gon’ make it into a Benz out of that Datsun
He got that ambition baby, look at his eyes
This week he moppin floors, next week it’s the fries
So – stick by his side
I know it’s dudes ballin and yeah that’s nice
And they gon’ keep callin and tryin, but you stay right girl
And when he get on, he leave yo’ ass for a white girl”

The album covers all the bases, from smooth slow-rolling songs like “Drive Slow” featuring Paul Wall to thugged out “Crack Music” featuring The Game to softly thoughtful songs like “Roses” up-tempo swinging songs sure to hit in the club like “Hey Mama.” Just when you think you’ve got Kanye figured out, he changes directions again. That would all be meaningless if Kanye didn’t have the talent to make it all work musically and lyrically, but time after time he hits the mark and does not falter. In fact the only major negative to “Late Regisration” is the annoying and not clearly marked skits for “Broke Phi Broke,” one of which featuring a gravelly voiced motherfucker kicking Kanye out of the frat for being too jiggy while having a voice like the food worker from the Fugees “four chicken wings fried HARD” skit, which was only slightly less obnoxious and irritating. Other than that I don’t blame Kanye for being late to school, because unlike a lot of his peers in the rap industry, at least his ass showed UP for school at all. Kanye West may be a study in contradictions but a lot of other producers and MC’s could still take some lessons from “Late Registration.”