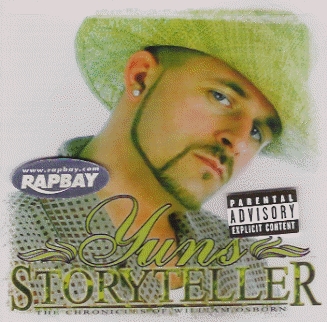 The term “storyteller” used to be a nice way for East Coast rap fans to say that they thought rappers from other regions had no lyrics. I remember countless times cats like Scarface and 8Ball were described as “good storytellers” by publications, as if saying that they lacked the lyrical skills (battle skills) that were so popular in the 1990s, but at least they could tell a story. The truth is that Face and Ball are outstanding storytellers and great rappers overall. And being a great storyteller takes much more than being able to rap, it takes lyrical skill to paint a vivid picture, especially when painting a picture you’ve only seen in your mind. I say this just to make it clear that when I call Yuns a great storyteller, it’s not a bullshit statement. Yuns can tell a great story, and he obviously knows it. “Storyteller: The Chronicles of William Osborn” is a solid album by an emcee who shows unusual storytelling skills and unusual compassion and insight on the mic.

It’s hard to describe Yuns style as it’s a bit different from any that are out right now. His production is filled with smooth guitars and pianos over laid back beats. It’s almost like soft rock meets country meets rap. Lyrically, Yuns can’t be classified as being a specific type of rapper. He brags at times, but is not a battle rapper, he talks about killing a man, but he’s not a gangsta rapper, and he spends a lot of time addressing the ladies, but he’s no Bow Wow either. Yuns is human. That’s the best description for him. He’s human, like you and me, and his album reflects that 100% .

“Hold My Head High” is an uplifting, yet laid back, anthem that finds Yuns shaking off the haters and offering words of wisdom. The fact that he rhymes “thang” with “thang” on the hook holds the song back a bit, but otherwise it’s a great track. “Radio” finds Yuns reflecting on a relationship that has fallen apart and declaring his love for his kids and family even through the drama. “She’s Gone” is probably the album’s best track as Yuns describes his first meeting with a woman, but the track has a twist that shows off Yuns’ storytelling skills. Even when Yuns talks about killing a man on “Mexico,” it’s only in reference to catching his wife cheating, which while I don’t condone any murder, is a sentiment that I’m sure many men and women can relate to.

Yuns is a talented rapper, but he still has work to do. While many of the tracks are outstanding, “Storyteller” suffers from repetitiveness at time. For one, the production tends to maintain the same laid back vibe, even when Yuns attempts to do party tracks. The other issue is that Yuns few attempts at party tracks tend to miss the mark. They aren’t bad, but pale in comparison to what is currently playing at clubs. The only song that the album could have done without completely is “Hip Hop Love Song,” as the concept has been done to death and should probably be left alone by any emcee.

“Storyteller” is a good album a cut above most of today’s releases in both concept and quality. Yuns isn’t afraid to address topics that most rappers would see as “soft” and he does it in a way that anyone can relate to. He can even manage to put himself in other’s shoes and tell stories about events he may not have actually experienced. He’s a great storyteller and doesn’t limit himself to the topics that dominate today’s rap game. Yuns is just a regular guy struggling to make it by, something anyone can relate to. His honesty is commendable, but the fact that he has talent to match is what truly sets him apart. With a little more attention to detail and more variety next time around, Yuns could definitely hit it big. For now, “Storytelling” is still an album worth purchasing by anyone who can relate to being human.