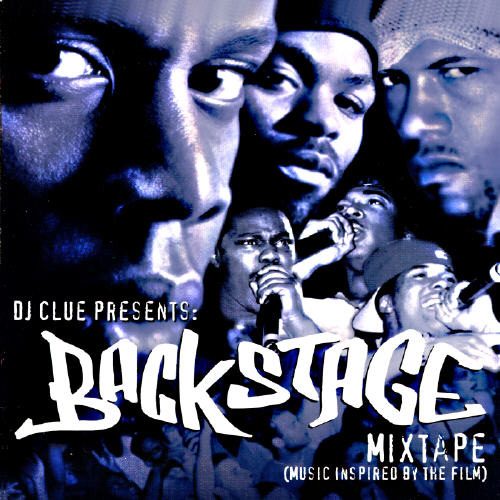 DJ Clue – possibly one of the most VOCALmixtape DJ’s in rap next to Evil Dee and Funkmaster Flex. Their tapes and CD’s are known to feature the latest hot underground raps and always have a few “exclusives” recorded that will supposedly never be released except to the people who buy that mix. Unless the sample can’t be cleared (such as Cam’Ron’s “357” sampling the show Mangum P.I.) they usually do.

As a DJ myself, I always find that “less is more” when making a mix. People don’t want to hear you talk – just shut up and give them music. Clue mostly succeeds in that area on this “Backstage – Mixtape” which was apparently inspired by a film about what rappers REALLY do when they’re macking chickenheads. The premise is probably as flimsy as the 35mm it’s printed on, but the roster Clue assembled is better than the average for a soundtrack – everybody from Jay-Z to the Hot Boys to OutKast get their licks in on this one.

Aside from “People’s Court” where DJ Clue calls the song both “classic shit” and “new Jay-Z” in about six seconds (it’s actually been on a previous Clue tape and import Jay-Z singles) most of the material is fresh, and most of it is good. Beanie Sigel raps over an incredibly ominous Timbaland beat on “In the Club” that will undoubtedly nod your head – but if that doesn’t get you Alchemist does him one better with the pianos and hook of Prodigy’s solo “Keep it Thoro”. P has theDunn slanguage in full effect on this joint:

“Remorseless, haunt niggaz like Poltergeist
My advice ‘fore it get like that, is think twice
‘fore you move on it, put jewels on it, who want it?
Loose niggaz make the news when we start formin
Snatch stripes offa niggaz uniforms often
Doin it by si-delf, you way out your jurisdiction”

Even though the album slows down a bit with just average raps by Memphis Bleek on “My Mind Right” and The LOX on “Who Did You Expect” (produced respectively by DJ Twinz and Swizz Beatz), the album picks up with some suprisingly good R&B cuts by T-Boz and Christion – the problem is it’s really incongrous to hear such smooth songs while DJ Clue is busy shouting out Jigga and Damon Dash. Shut UP Clue, I can’t hear the music! This is where mixtapes can get obnoxious.

Hot Boys fall right in the middle between tracks 1 and 19 on “Millionaire”, a typically dope track from their in-house king Mannie Fresh. On the backside you’ll find everything from the fast tempo “Funkanella” by OutKast to the New Jersey collaboration “Come and Get It” by Lady Luck and Redman – where the Lady even pays tribute to the classic EPMD track “Rampage”. That’s the shit!

From here to Jay-Z’s finale on the album you’ll find a selection of typically thuggish rap from New York by Cam’Ron, Fabulous, Capone-N-Noreaga, Memphis Bleek, and Ja Rule. Even though some of these have damn good music (Roots producer Scott Storch hooked up CNN’s “Don’t Want Beef”) it tends to drag a bit due to the repetitiveness of the topic matter. These rappers all have the same style and rep the same things; only the hoods and the streets change.

Overall, Clue succeeds in putting together a listenable collection of music on this album – but it’s pretty obvious the mixtape is just that – a mixtape. It’s in no way comparable to a soundtrack and why they chose to link the two together is fairly incomprehensible. If you want to hear some new shit that’s mostly East coast in topic and origin and don’t mind Clue’s interruptions every 30 or 40 seconds (usually for no reason at all) then this is the album for you.