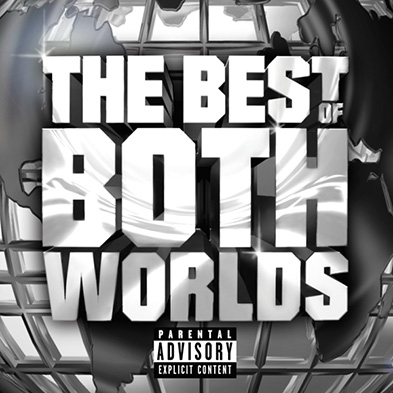 And with that rather ironic phrase, Jay-Z launches both the album and the title track for the album “The Best of Both Worlds.” It’s not hard to see why this was any record company executive’s wet dream come true: R. Kelly, the multi-platinum selling R&B superstar; collaborating with Jay-Z, the multi-platinum selling hip-hop superstar to do one album together. The best part for the stuffed shirts is that Kels (as Jigga likes to call him now) and ‘Hova have already done this before: Jay-Z appearing on R. Kelly hits like the “Fiesta” remix, and R. appearing on Jay-Z hits like “Guilty Until Proven Innocent.”

There’s only one problem with having a proven formula though, and that’s that by it’s very nature it becomes formulaic. If you’re mass producing plastic toys or chicken nuggets nobody’s going to complain, because those are the products consumers demand always be uniform in quantity and quality. Music, for better or worse, is a much more delicate business. Sometimes a formula for a hit works once, and in some cases when applied to different artists in the same genre over a period of years can produce multiple hits: gold, platinum, and even diamond. And just by the very nature of having two huge stars of R. Kelly and Jay-Z’s caliber, the labels involved in “The Best of Both Worlds” have pretty much assured themselves the album will reach one of those plateaus – eventually.

WHICH plateau ultimately depends on how long the public’s appetite for chicken nuggets and cheap plastic toys holds up. This album, as much or more than any I’ve heard as a reviewer in the past five years, is formulaic to the n^th degree. The Kelly/Jigga collabo’ has been interesting in the past, but repeating it ad nauseum for thirteen songs and packaging it as “The Best of Both Worlds” is misleading. With both artists really just going through the motions and phoning in their performances, it ought to be called “The Least of Two Efforts.” In fact considering that the Track Masters (Poke and Tone) produced or co-produced 7/8ths of this album, maybe it should be called “Track Masters, Kelly and Jigga Phone Home.” Then you could at least justify selling it with an E.T. doll and give the consumer something worth keeping.

A couple of tracks try to reach above the flatline of predictable consistancy. “It Ain’t Personal” has a nice groove and respectable lyrics from Jay-Z, although I’m really not believing R. Kelly was a drug dealer who “sold to the same damn fiends” as Hov’, let alone the fact they are from completely different metropoli. “Green Light” has just enough guitar rock punch to stick in your head, and R. Kelly’s pseudo-rap flow is entertaining until he brags that he can boost ratings on “Rap City: The Bassment.” Kels, stick to 106th and Park; and please save the Sisqo disses – it ain’t cute. The album is wrapped up with “Pussy” featuring Devin the Dude, whose magnetic Southern personality and flow inject the only other life to be found anywhere on this CD.

In the infamous words of the mobster Hesh on The Sopranos, “There’s good and there’s not good. This is not good.” Actually, he has some even more apt words for this situation: “A hit is a hit. And this my friend, is not a hit.” Well, maybe it’s a prefabricated formless processed chicken nugget that might taste good if you like that sort of thing, but if you’re used to the sirloin steak Jigga usually offers and the chicken parmegan R. Kelly usually croons, these cuts won’t do. Once it works, twice it was good, but this is just 13 times too many.