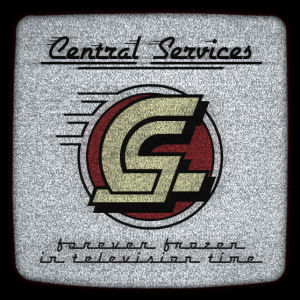 Right around the time RR was covering Camu Tao’s final album “King of Hearts,” the people atDefinitive Jux decided to release a free EP in support of the album called “Forever Frozen in Television Time.” The EP was the result of a collaboration between Camu Tao and his long-time friend El-Producto, which they had intended to release as a group under the name Central Services. For whatever reason, the EP got shelved and never worked its way to fans of either rapper/musician until this year – but better late than never as they always say – and besides it’s free.

Much like “King of Hearts,” the Central Services EP features a side of Camu Tao which veers away from traditional hip-hop rhyming and jumps into heavily overproduced crooning, complete with echo effects, distortion and reverb up the wazoo. It also features a parody on “Submarine” which is downright odd, as the CS crew suddenly bust into their own version of Kelis’ “Milkshake” at the end of the song:

The vocals aren’t the only place to find static turned to distortion though. “Fuck Me” is definitely a fitting name for track #4 of this 8 song release, as you literally go backward from having something phallic jammed in your ear and only being able to hear noise to the air pressure equalizing as it’s removed and gradually forming a semblance of sound. The lyrics are, let’s be kind about it, kind of whiny. “This day, I know, that your heart ain’t real/this day, I know, where your heart is/this day, I know that you used me.” Ouch. The girl on the other end of this ballad is probably thinking “Fuck Me? No buddy, fuck you. And while you’re at it, fuck off.”

There are times when Central Services do strike a good balance between the odd crooning and the deconstructionist El-Producto musical approach, as on the heady but otherwise musically acceptable “Speak In Tongues” and the album’s only previously released song, “Oxycontin” – which appeared on El-P’s “Collecting the Kid.” In other cases, and I’m being honest without trying to be needlessly cruel here, there’s more than enough reason to see why this EP was shelved. As a companion piece to “King of Hearts” it proves to be somewhat interesting, given two like-minded oddballs decided to take the music they made far beyond traditional parameters. The flipside of that equation though is that those parameters help make music relevant to your life. “Forever Frozen in Television Time” is not something you can bang in your whip, play in the club, headnod to on your headphones or get crunk to while you’re intoxicated on malt liquor. The only context this album might be suited for is getting high on acid tabs, so for me, this one just doesn’t work.