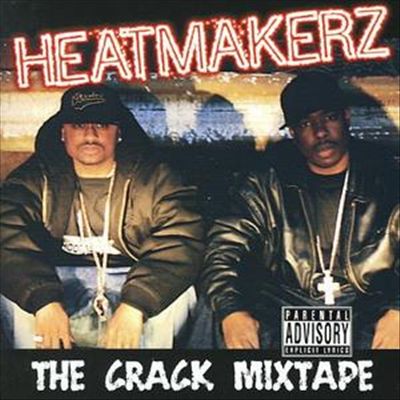 The Heatmakerz :: The Crack Mixtape

Despite The Heatmakerz relatively large following and affiliation with DipSet, their brag of over two million collective sales for their production is hardly impressive. The truth is that ever since the crew of producers blew onto the scene with their work on “Diplomatic Immunity,” they haven’t reached the levels of production royalty that many predicted. Their heavily sampled production is a love it or hate it affair as many think that they don’t do enough with the samples they use and churn out formulaic beats. Even as a fan of The Heatmakerz work, I must admit that for the most part The Heatmakerz’s work does tend to sound too similar too much of the time. “The Crack Mixtape” does provide some gems, but outside of hardcore fans, the overall work on the CD will do little to move the crowd.

The Heatmakerz do produce some catchy tracks on a pretty consistent basis, but the problem most people have with them is the fact that they probably do the least amount of work out of all hip-hop producers. Sure, the rap world has always relied on samples heavily to provide the music, but in an age where samples are reproduced by musicians in the studio, composition is popular, and production is complex, The Heatmakerz stand as the antithesis to this evolution. The extent of The Heatmakerz work is finding a sample, speeding it up, looping it, programming drums, and creating a bass line. Ten years ago that might have cut it, but in today’s fiercely competitive and innovative production game The Heatmakerz’s approach fails to distinguish them especially when many of the samples used are extremely popular and mostly unchanged. The crew has given themselves a bit of identity by their signature drums and overuse of the stutter effect on tracks, but overall their sound is hardly original and easily replicable.

As a fan of their sound, I definitely enjoyed “The Crack Mixtape” more than most probably would. The highlights include M.O.P.’s “BKNY,” Noreaga’s “City Boy,” and “Gangster Music (Remix).” M.O.P. brings their usual energy on “BKNY” and the crew provides a decent beat that doesn’t try to overshadow them. “City Boy” is another example of The Heatmakerz jacking an extremely popular song, but Capone and Noreaga’s presence and the song’s catchy nature make the track work well. The remix to “Gangster Music” isn’t much different from the original, but since the track was fresh to begin with, the addition of Remy Martin and Razah do nothing to detract from its vibe. There are a couple of other notable contributions, including tracks from Fat Joe and Lil’ Flip, but these tracks are cut short clocking in at only 2 minutes each.

The rest of “The Crack Mixtape” is full of typical Heatmakerz production and lyrical contributions on par with any mixtape out today. Saigon’s contribution on “Not My Baby” is good while he is horrible on “Not Fucking With That.” Jim Jones, Juelz Santana, Cam’Ron, and Hell Rell contribute but don’t provide anything too outstanding to the mix. Even high profile guests like Ludacris don’t add too much as the I-20 song he is featured on lacks both musically and lyrically.

Some slack can be given to The Heatmakerz since this release is only a mixtape. The material contained probably doesn’t reflect the crew at their best, but is still indicative of what one can expect from them. Part of the blame for The Heatmakerz lackluster sales so far can be attributed to the fact that many of the crew’s best tracks end up being released on mixtapes. But even including those gems not officially released, the crew probably will never be on par with the game’s best producers. They do what they do well, but ultimately The Heatmakerz aren’t original enough to set themselves apart. “The Crack Mixtape” is recommended to fans of the crew’s styles, but those looking for a well rounded or diverse album will probably be turned off by the albums repetitiveness both musically and lyrically.