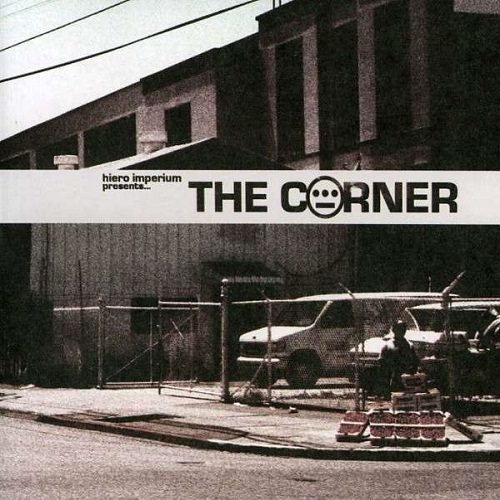 The Hieroglyphic Imperium has a plan, and it’s a deceptively good one. At first it might seem somewhat suicidal – offer an album packed full of the best selections their imprint has produced in the last year, along with a bunch of free enhanced CD features that had to be expensive to produce, and retail the whole enchilada for under $10. Now who in their right mind would do a crazy thing like that? Not only would you be losing money on each unit sold, you might actually be sabotaging yourself by giving up so many great songs individually instead of as part of the respective albums they can or would hail from.

The Hieros know exactly what they’re doing with “The Corner” though. As a budget sampler of their best and brightest, it’s merely a savory appetizer that makes you all the more hungry to dine on the full length albums of Casual, Opio, Tajai and Del among others. At times Hieroglyphic compilations have been hit or miss, from the outstanding “Third Eye Vision” to the underwhelming “Full Circle” to albums like “The Building” that fall somewhere in between. If you had to fit “The Corner” into that ambitious yet uneven track record, you’d file it between “The Building” and “Third Eye” as improving on the former, yet not quite being able to capture the stellar “Oakland Blackouts” level heights of the latter.

What “Hiero Imperium presents The Corner” does offer from Del doesn’t compare well, as “I’m Gonna Make It” is a good if somewhat uninspired track from the rapper who himself swings wildly between dopeness and cluttered stream-of-consciousness. Rather it’s the other Hiero members from the clique he gave birth to that turn in the outstanding performances. Opio’s “Talk Dirty” is a tri-pronged attack with Persia and Pep Love that slyly commits debauchery as Opio declares himself a “cunning linguist.” The newest Hiero recruit O.C. proves himself a perfect addition to their roster on the squarely 4:00 long “Phenomenon,” where he declares “this hip-hop thing, I don’t do it for the applause/not knockin anybody but FUCK AN AWARD/my reward be a well-received gift from God.” Say word. Pep Love can make you “Stop Rock” with his minimalist flow clap rap, while the whole Hieroglyphics crew “Love Flowin'” to a live performance track so dope it’ll make you stop and say “What the Funk” like the opening cut. From the comical J-Zone produced “Say That Then” by Casual to Opio’s solo on number nine that’ll make you see “Stars,” it’s all to the good.

The most major criticism of “The Corner” may simply be the length. To cram in all of the enhanced features like Opio’s “Talk Dirty” video and a trailer for their “Full Circle Tour DVD” they had to cut the musical length of the presentation down to just 40 minutes. That’s a damn shame really, especially since these days the way to go is to pack a bonus disc DVD with all the extra shit into your mix instead of trying to cram it all together into discs that typically don’t work on all PC’s anyway (the bane of every such album released in the 1990’s). Other than that if you’re a Hiero fan who wants a strong sampler of their material or who is out of touch and hasn’t kept up on their new releases, you could hardly go wrong with this compilation, which at under $10 is an oustanding value for the price.