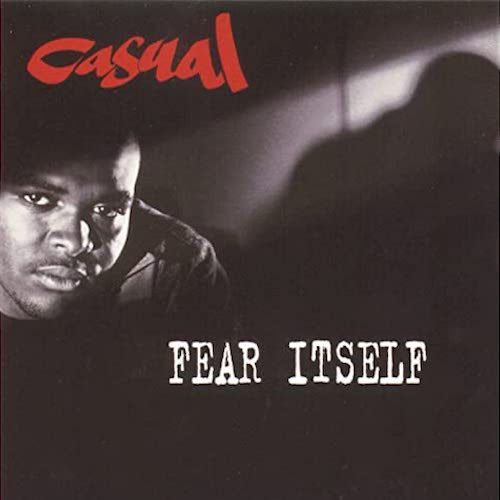 Every time the origins of the Hieroglyphics are brought up, Del the Funky Homosapien is recognized as the de facto Godfather. He was the first member of the collective to get a major label deal, he designed the Hiero logo, and to this day he remains the most prominently visible member of the crew. From my perspective though Casual is just as important to their existence. He’s the third oldest member behind Domino and Del (at least as far as I know — I can’t find Toure’s age), his authoritative voice commands respect on any track, and he was the first out of the crew other than Del to release a solo album with “Fear Itself” in 1994. In addition hip-hop legend holds that the “Hiero vs. Hobo” war in Oakland was started because Saafir the Sauce Nomad was invited to make a cameo on Casual’s album, but Saafir didn’t repay the favor on “Boxcar Sessions” and the beef was on.

Whether or not that’s the sole factor that led to the now famous battle on Sway & Tech’s Wake Up Show, the fact Casual seem to be both figuratively and literally at the center of the Hieroglyphics was not lost on a young Flash. I took to “Fear Itself” with unrelenting zeal, picking up every 12″ released from the album and exposing as many listeners to him as possible through radio shows and mixtapes. I doubt it did much good given that Jive Records never released a sophomore album — and WORSE they cut ties with the Hieroglyphics altogether despite critical acclaim for the Souls of Mischief debut album. That’s led Casual to be unfairly blamed for the relationship being severed based on poor sales of his effort, ignores the fact that Jive was divesting from hip-hop in general in the mid-1990’s, shifting their focus to pop acts like Backstreet Boys and NSYNC. So “Who’s It On” then — Casual or the label? The label.

Incidentally this jazzy, piano laced Domino track unquestionably solidified Pep Love’s place in the collective, the skills on full display as he nimbly spit bars like “Who’s a pimp? The nigga that profits, when I rock shit/I spin, check this shit which I concocted/then you can jock it.” Del takes off after the saxophone chorus to “add flavor” to the posse track, dropping phrase after familiar phrase from “No Need for Alarm.” There was something unquestionably dominant about Casual going last though — no hook, no chorus after he laid his game down quite flat.

“Your dome is disconnected, we wreck shit
Niggaz don’t know how to flow
That disgusts me, and keeps me bustin
I must clean the hip-hop scene
I’m aware, no one can compare so I fiend
to hear a nigga who can flow better, you know better
Hieroglyphics runnin shit from here til after fo’ever
so clever emcee take shorts because John… knows who’s it on”

The single that set the album off though was the Del produced “That’s How It Is.” A militaristic marching beat with powerful kick drums and snares sets off Casual’s warning to inferior rappers from coast to coast. “I write raps, and when niggaz bite I clap/cause they shit sound better now/You done let me down, cause I thought you would be dope/but instead, your shit’s dead, you gets fed/to the alligators lurking in the moat/Peep what I wrote/You bit so hard, I thought the shit was a quote.” POWERFUL IMPACT. BOOM! Casual fired a cannon at the whole of hip-hop, and he doesn’t relent in the second verse when he quips “Enough with these motherfuckers biting Das EFX.”

Sadly the “Part 2” sequel featuring A-Plus doesn’t make it onto “Fear Itself” nor the “Dissishowwedo” remix, both of which are worth tracking down if you can find the “I Didn’t Mean To” single for a reasonable price. Casual casually dropping the diss “you’re swift as a statue” is a true gem.

Speaking of “I Didn’t Mean To” though, the track has a super fat bass loop self-produced by Casual, and the rugged Hiero member declares apologies in advance to anybody whose woman ended up with him, sliding into a smooth chorus with the refrain “It ain’t my fault that your girl got caught” before kicking right back to the super fat funk.

“The coming of the new Overlordian” is how Casual introduces himself on the third single “Me-O-Mi-O,” once again establishing his cocksure attitude in effortless fashion. “Plus I please a queen, when I choose to/Never can decide which one, to give juice to.” Perhaps it came too easily to Casual for some listeners. They mistook his name and his confidence for a lack of effort, but as Cas says himself “the autobiography of me” is “misconstrued by some” who fail to recognize how much flavor he gives Domino’s track.

And now I have the perfect excuse to introduce you to one of my all time favorite remixes ever — “Me-O-Mi-O (It’s a Me Thang)” from Jay-Biz. I cranked this shit so loudly that I’m surprised I didn’t get reported to the RA in the dorms. “The microphone, is like a bitch to me” quips Cas. “We the Hiero crew. It’s all about me, not you.” While the only sample that’s credited on the track is Audio Two’s “Top Billin’,” I’ll swear on a stack of crates that the bassline is the same one Masta Ace jacked from Original Concept’s “Knowledge Me” for the “Born to Roll” remix of “Jeep Ass Niguh.” If that’s not what Biz took it from, it sounds really damn close to the same.

In some ways it’s a knock against “Fear Itself” that so many of Casual’s best tracks from that era are remixes exclusive to vinyl records that weren’t on the album. It’s highly overdue that a deluxe re-issue including those songs and accompanying instrumentals gets put out. The Hieroglyphics are at the peak of their production prowess on the cuts that are included here over the course of 50 minutes. “I use my mutant powers on niggaz shooting sour rhymes/Hiero it’s our time” spits Casual on Jay-Biz’s aptly titled “This Is How We Rip Shit.” Domino makes “Be Thousand” ring and ding as Casual flexes with the assistance of Tajai and Snupe. “No nigga can harm, me/I whoop his ass in the grass” explains Casual, talking more like a MMA fighter than an emcee long before I knew about UFC. He’s just as good when he’s doing his OWN beats though. “You Flunked” is an incredible track from both sides.

Is “Fear Itself” underrated? Absolutely. Hundreds of people have sampled Curtis Mayfield’s “Hard Times,” but what Casual and Domino do on “Follow the Funk” layers it up into something more thanks to his impeccable rap and additional samples from Freddie Robinson and Willie Hutch. Picking any one track like this off the album is easy to do, because they’re ALL so good. It’s inexplicable that this album didn’t succeed. Jive clearly saw enough in the Hieroglyphics to release albums from the crew, then didn’t push with any force once they were all in place. Perhaps it was the rise of G-Funk overshadowing their Oakland hip-hop movement. Perhaps it was the East coast/West coast rivalry overshadowing both. Either way it’s high time to add this album to your collection if it’s not already in it.