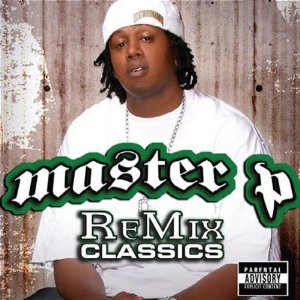 Master P explains what’s going on best with this record himself in the “Intro,” so I’ma let him do the talking. Mr. Percy Miller, please tell all your fans and the RapReviews.com audience what the concept is, because we’re dying to know whether this is “Greatest Hits” or “ReMixes.”

Master P: “Yeahhh. I know y’all been waitin’ on this _Greatest Hits_ a long time. But I decided to give y’all somethin’ a lil’ different. I’ma call it _The ReMix_, cause you gon’ get a lil’ old, and some new, mixed together. Some +Ughh+, then +Ghetto Bill+ and +Ice Cream Man+. You gon’ get all kind of flavors. Y’all just sit back and chill… if you ’bout it.”

Okay, now I’ve got the concept. This is like what EPMD did when they went “Out of Business.” You don’t remember the album? There’s no reason you should. Although rap fans were excited when EPMD first reunited after a five year hiatus in 1997, it was clear they only had enough gas in the tank for one go ’round. By the aptly titled second reunion album they were sputtering on E, lost in a mediocre album with only one good song. That would have been bad enough but their new album came with a bonus disc of “Greatest Hits” that weren’t so great because instead of the original versions that were hip-hop classics rap fans got poor remakes that were insulting to listen to. It was so damn bad EPMD should have been sued for false advertising.

Let’s give Percy Miller some credit here for not claiming all of these songs are the original versions you know and remember. He’s being honest and that kind of honesty goes a long way with both his audience and the critics alike. If P hadn’t said it himself, you’d get the idea from looking at the liner notes to this “ReMix Classics” album. Even casual P fans probably remember that the production team Beats by the Pound were responsible for so many hits by him and his No Limit compadres in the early days; in fact almost ALL the hits until they left No Limit in 1999 and changed their name to the Medicine Men. Reading the insert for “Greatest Hits” you’ll notice they are not mentioned under either nom de plume, not even on their seminal tracks like “Bout it Bout It” and “Mr. Ice Cream Man” or well remembered crossover hits like “Make Em’ Say Uhh!” The liner notes now say they’re all produced by Yellowboy. Well if they are indeed re-makes, that could arguably be true. With Myke Diesel’s help mixing them down a lot of these tracks do sound damn close to the originals. It should also be noted that either for legal reasons or to be clever P changed the names of the songs a bit – they’re now called “We Bout It” and “Got Cream” and “Say Ugh” respectively.

Unfortunately P runs into the same problem that EPMD did, which is that sounding alike just isn’t enough. The differences are small at first but they are disconcerting and they do add up. You won’t remember anybody named Black on the first “Bout it Bout It” nor any references to the NEW No Limit, because back then P hadn’t filed for bankruptcy and re-structured his whole record label. It was just No Limit Records, the big gold tank with all his soldiers who were down to ride on it. Speaking of whom, you start to notice they’re missing on the songs where you expect to hear them. It doesn’t matter whether you call it “Make ‘Em Say Uhh” or “Say Ugh,” it’s just not right without Fiend, Mia X, and in particular the memorable and maniacal performance of Mystikal closing the song. Imagine the same song stripped down to just Master P and Silkk the Shocker. Does that sound like a classic any more? It shouldn’t to you, and it doesn’t to this reviewer. The song ends abruptly, almost blatantly admitting it’s only half there. P could have at least tried to substitute in a few of his New No Limit Soldiers to flesh it out. Hell I’d have settled for his son Romeo.

Unfortunately for “Greatest Hits – ReMix Classics” almost none of the songs featured within are more recent than 2000, which means you can expect to hear nothing but remade beats and songs without all the former No Limit Soldiers. Even the rare ones that are post-2000 like “Bout Dat” from “Ghetto Postage” are STILL remade, for totally unfathomable reasons. The only song with no discernable difference musically is “Thug Girl,” but the title of it is still changed for this album to “Thugettes.” At some point it’s all just a little too cute – the renamed songs, the missing artists, the seeming bastardization of his own once proud catalogue. It’s not like P was ever the world’s greatest rapper – after all this is the man who remade Eric B. & Rakim’s “Make ‘Em Clap to This” into a song called “Ghetto D” where they actually gave a recipe for cooking crack. It was an insulting thing to do back then, and it’s only more insulting to hear an already bastardized song be re-made further. A true “Greatest Hits” would have offered the original versions of these songs in tact, and a true “ReMix Classics” would have done something ENTIRELY new with the songs instead of just remaking the beats to avoid the Medicine Men coming after them for royalties. In the end this album achieves neither of the purposes it is listed or credit for, and No Limit fans would do better to make their own mixtape of “Greatest Hits” from the original releases.