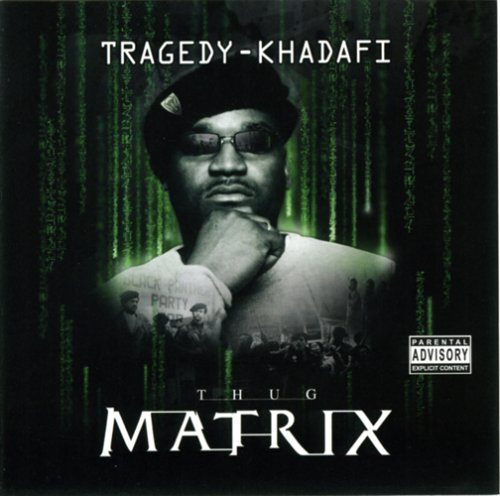 The legendary Juice Crew is still alive today, you just need to know where to look. While most of the original supergroup has come and gone, a few of Marley Marl’s protÃ©gÃ©s are still showing that they haven’t gotten tired. Masta Ace has gotten arguably stronger with time, ironically in Marley’s absence, but Tragedy Khadafi is looking to resurrect his career as well. He never really fell off, because it’s hard to do so when you’re so underappreciated to begin with. The mid-nineties featured him in a shadowed role amongst the QB rap heavyweights, and with the help of these same people (Havoc, Cormega, and the less seasoned Alchemist), he’s asking us to enter his “Thug Matrix.”

I can ignore the corny title and terrible cover art for a while. The music inside is mostly what one might expect from reading the liner notes, which is generally a good thing. The production credits go to Alchemist, Havoc, Scram Jones, Ayatollah, and others, and the beats won’t surprise you. Gloomy strings and full basslines are occasionally tinted with keyboards, and not too much else. The standard thumping orchestral tracks make an appearance, most notably on the Star Blaze track “I Don’t Wanna Live No More.” This type of song always sounds nice until you realize that you already own twenty songs with nearly the same elements, mixed in nearly the same fashion. Only Scram Jones brings any true variation, as his two contributions are characterized by intensely booming drums and a less typical selection of loops.

“The Game (It’s On)” opens the album with a beat and a guest shot from Havoc. The Mobb vet brings an intensity that has marked his increasing success as a rapper, but his production disappoints. Though low-key and quite smooth, he fails to elevate the song by himself. Expectations of Havoc are unfairly high, but here he is far from the producer that can carry anyone.

“Break Bread” features Cormega, but Tragedy asserts his dominance over a lazy Now & Laterz beat. His ferocity is a perfect balance for Cormega’s disjointed and emotive flow, and he proves again that a little anger never hurt anyone. He carries the hook through pure fury, and his first verse is a definitive statement of his return to the game. He is spitting like it is his first time rocking a show.

Alchemist’s two contributions to the disc are thoroughly unfortunate. He has not begun to reinvent himself after his success in the early millennium, and both tracks are laden with the strings I have begun to expect from him. Here, he is providing his usual offerings, but without any of the flair that has accompanied the new-school classics he has previously laced. These two joints fit nicely into the fabric of the record’s new-school Queensbridge sound, but accomplish nothing else.

The finest single production arrives on another Cormega appearance, as Ayatollah constructs a vibrant, and most of all different work for the two veterans to tear apart. The other most memorable track is “Lyrical Calisthenics,” which is thankfully not another actual experimental verbal gymnastics affair. Instead, Khadafi runs all over Asmatik’s minimalist pianos. Without the elaborate backdrop to wipe the luster off of his voice, he comes through clearly, delivering a magnetic performance. Across “Thug Matrix,” Khadafi offers a subtly unique blend of thuggery, general gangsta babble, and ghetto wisdom that he has certainly earned the right to speak upon. He relies too much on violent themes, but he is still the “Intelligent Hoodlum” that he prophesized so long ago. He has an engaging voice and his rhymes are never awing but always airtight. It is easy to listen to him, but he is still a demanding lyricist.

Now I will return to the cover art, simply to assert that luckily, it doesn’t matter. The fact that he appears to have mailed in the ugly art and title in lieu of a real title is not much worse than simply calling your album “All or Nothing” or “The Naked Truth,” because none of those titles have anything specifically to do with their respective music anyway. So just know that aside from some lesser production from usually reliable producers, Tragedy Khadafi has come through in 2005. Just be sure he doesn’t hear you call it a comeback.