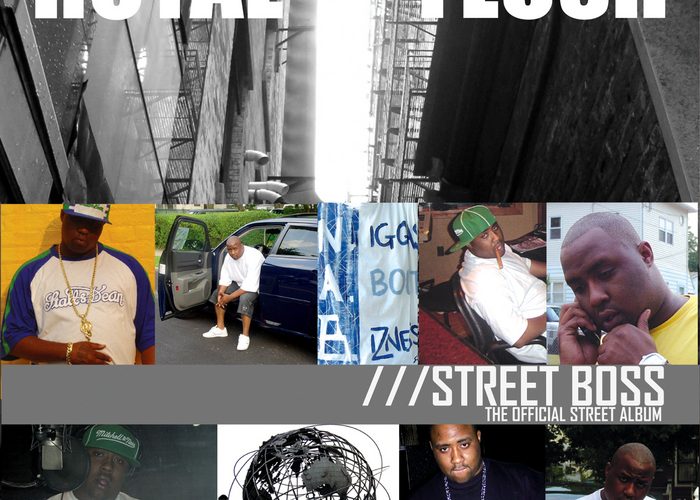 When your album’s titled “Street Boss”, it doesn’t take Sherlock Holmes to figure out the theme of the LP they’re about to hear. Granted, sometimes titles are deceiving. But in this case, you’d be 100% rightâ€¦maybe TOO right. “Street Boss” overflows with track-after-track of street narratives, which in itself isn’t the issue. The problem lies in the lack of any inkling of variety (in content or beats) and the absence of imagination with the lyrics.

The proceedings start poorly with “N.A.B.”, “Roll Call”, and “Q.U.”, similar sounding “my crew is tougher than your crew” tracks that wouldn’t be half as bad if their sameness wasn’t amplified by laying them out back-to-back-to-back. We get some relief with “Life Is Hard”. Flush’s lyrics, while relatively the same as all the other tracks on the album, actually sound better when expressed over inspired production:

“I was put here to stand my ground, strapped with a four-pound
A lotta people questioning me now, “Haven’t heard you in a whileâ€¦”
“Are you still writing love, selling drugs, and fist-fightin’?”
“Where you been?” Missin’ like Tyson and catchin’ indictments
See the ice [is] brigher than lightning, models are still hypin’
In the club poppin’ them bottles and causin’ incitements
You the reason why a lotta lame dudes started bitin’
Taking your life and put it in they rhymes while they writing
They ain’t built for these riots, hit niggas’ll keep ’em quiet
Take dope back and forth to Maryland like Len Bias”

“Worldwide Part 2” features the Brownsville bullies, M.O.P. Fame and Danze are in typical Red Bull form and Flush is in, well, typical stoic form. Considering the track employs a high-energy beat, Flush is out of luck. He gets similarly out-shined on the freestyle track with the late Big L. “Y’all Can’t Fuck With Us” and “Don’t Get F’d Up” are wannabe street anthems competing for worst-hook honors and are thankfully short. “Love” is the strangest love (or anti-love) ballad ever. With a coffee shop beat and complimentary R&B chorus singer, Flush takes a bizarre U-turn and angrily grumbles and pouts like a 50-year-old bachelorette. Sure, Flush raises a valid point: love can cloud judgment and mess things up amongst friends; it’s the whole “bro’s over hoes” mentality in song form. But damn, dude just comes off as bitter. The only thing missing from this picture is a carton of low-fat ice cream.

“War” features a screeching, off-key (surprise surprise) hymn from the late Ol’ Dirty Bastard. I’m usually an ODB backer, but sometimes his ranting is just plain annoying. This would be one of those times. “Best Type of Rapper” proves that Flush is at his best when in battle mode. Nothing ground-breaking here, but it’s definitely his strength. Then again, “The Theme” might refute this statement. Both “The Theme” and “If You Wanna Ride” showcase Flush’s harmonizing skills in the chorus. You thought Ja Rule’s singing was badâ€¦

“Section 8” is a highlight because Flush succeeds lyrically by not trying too hard. The simplistic beat actually stands out amongst the bland offerings throughout the rest of the album. The hook still sucks (that seems to be a theme on this album) but no off-key singing means it’s at least listenable. “Clap” features yet another fallen legend, Big Pun, and “Angel Dust” features Mic Geronimo. Sticking to the same formula as “Section 8”, both tracks are winners by taking the minimalist approach. The parade of guests continues with the Infamous Mobb and Big Noyd (“The Livest”) and Twista (“Pimps Up Hoes Down”). Sadly, these tracks actually make the album better because they contain people OTHER than our host. The album closes with three bonus tracks, two of which are recycled from his poorly received 1997 debut “Ghetto Millionaire”.

Royal Flush has been M.I.A. since his debut eight years ago. The game has changed since then and unfortunately something was lost in the translation. Sorry Flush, when the best songs on your album are tracks with guest appearances or repeats from your forgotten debut, you have a bad album on your hands.