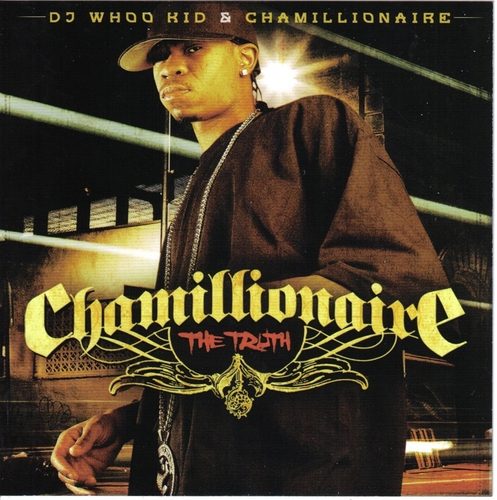 Whether you hate him or you love him, it’s hard to deny Chamillionaire his props for putting the “P” in prolific. 50 Cent proved that the formula works. If the audience isn’t tired of yo’ shit, just keep putting out more and more of it on mixtapes. As long as you’ve got the talent and amibition to back it up, sooner or later you’re going to blow up like Nagasaki. Even without the national exposure and music videos of his former partner-in-rhyme Paul Wall, Chamillionaire’s been puttin’ the damn thang down so hard he’s already got a “Greatest Hits” album. And guess what? Patience and persistence paid off. Chamillionaire’s major label debut “The Sound of Revenge” on Universal Records is due any minute now.

“The Truth” can be viewed a warm-up to that big release in more ways than one. The first of this two-disc set is your prototypical Chamillionaire release, where in the Texan can be found unleashing his lyrical flow over beats you already know. The title track and second cut on the CD borrows from the Jay-Z classic “This Can’t Be Life” and you can hardly blame him for it – it’s the perfect somber melody to be spitting some truths over:

“My father was Muslim, my mom was a Christian
I couldn’t even look surprised when they said they was splittin
Wasn’t no, bacon or grits’n, off in the kitchen
It was missin, plate was full of non-nutrition
I was a, born skinny the hunger was forced in me
to get angry at my lifestyle, no smile wasn’t born friendly
Born with a thorn in me”

That’s just one of the many ways Chamillionaire sets himself apart from a sometimes generic pack of DJ Screw worshippers. At times it seems far too easy to spit raps about cars with candy paint jobs and chrome wheels, and far too hard for some of the new Southern generation to rap about anything that’s deeply personal. In fact the most surprising thing about Cham for those who haven’t been keeping up with his releases is how he openly scorns some of his contemporaries for playing out raps about balling, as evidenced by his raps over some speedy Kanye-like samples on “You Gotta Love Me”:

“I run these gimmick niggaz out of the game
I don’t need a reason cause it was time for a change
For havin the nuts to diss you speakin your name
Instead of subliminals like I ain’t to blame
For switchin the style up now I speak with a purpose
Instead of just speakin ’bout my rims in my verses
Geah, the fake shall fall and the real shall rise to the surface
I bought your CD but the purchase was worthless”

Cham may be tired of hearing too many rappers ball but he is not above a little flossing himself, deriding haters envious of his success over the bass-laden strings of “Oh No” and showing that he’s more than willing to protect what he’s worked so hard to earn:

“I’m old school with Ben Franklin, I talk with my bread
Soon as I let him out the briefcase, it’s off wit’cha head
Cain’t negotiate with the heater either, talk to the lead
It’ll talk to yo’ head; when it’s finished, you’ll walk with the dead
I call the police they’ll probably get him by the end of the week
I call the streets they gon’ get him befo’ the end of the street”

There’s really not anything to be mad at on the first disc of “The Truth.” Bun B and Lil’ Flip join the set for the humorous “Platinum AllStars.” Devin the Dude gets down with his typical smoothness for “Back Up Plan.” Chamillionaire can rip on any kind of beat with any kind of style; even pulling a speedy style worthy of Twista over his “Adrenaline Rush.” Aside from the fact he doesn’t own all the music featured here this would be a pretty good album in it’s own right. The second disc will do even more to get you amped up for his forthcoming album though. While it is a “Screw Mix” by O.G. Ron G, it’s far more than just tracks from disc one. It’s more like a sampler of best songs from Chamillionaire’s past, a slowed up “Greatest Hits” in it’s own right with songs like his “Victory Flow,” the “Messiah Walks” joint and an “Adrenaline Rush Remix” among other things. One thing’s fo’ sho’ – Cham always goes out of his way to give you more than your money’s worth when you cop his releases. If you can’t wait until “The Sound of Revenge” hits stores, pick up “The Truth” and you won’t be bored, as it has some of his freshest raps to date. One can only hope he’ll be just as choosy about what dope beats he raps on when they’re his own lock stock and barrel.