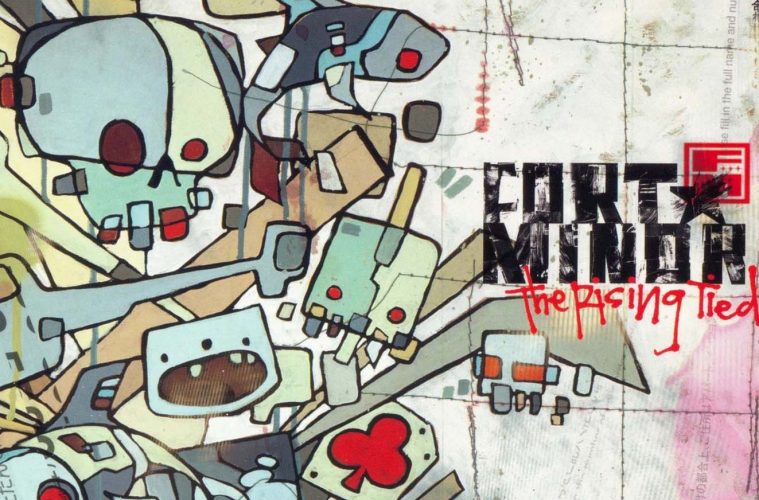 Mike Shinoda likes hip-hop. It should be pretty evident from the fact his lyrics on Linkin Park albums are most often presented in a rap format with a little bit of singing to punctuate lines or provide hooks. If that wasn’t proof enough there’s the “Reanimation” album where he teamed up with well known hip-hop artists and producers to remix all of Linkin Park’s biggest hits, or the official mash-up album “Collision Course” where LP met Jay-Z like chocolate meets peanut butter. For Shinoda though he’s still frustrated by the stereotyped pigeonhole of rock music, which means even though headbangers might take him seriously, hip-hoppers don’t.

Fort Minor’s “The Rising Tied” is Linkin Park re-imagined as a rap group with Shinoda as the frontman and an all-star roster of guests to provide solid hip-hop support, led chiefly by the underrated rap duo Styles of Beyond. Despite a strong debut album and the solid follow-up “Megadef” in 2003, they too have been searching for respect from a fickle rap audience who thought they were the next big thing for a minute before jumping on the MF Doom bandwagon. Don’t get it twisted because that’s not a knock against Doom – I’m just pointing out that loyalty in the underground rap scene is hard to come by and even the dopest of artists get treated like the flavor of the minute. SOB’s Ryu and Takbir have teamed with Shinoda on almost half of this 50 minute album to prove that they haven’t gone anywhere though, starting right away with “Remember the Name”:

Shinoda: “Mike! – He doesn’t need his name up in lights
He just wants to be heard whether it’s the beat or the mic
He feels so unlike everybody else, alone
In spite of the fact that some people still think that they know him
But fuck em, he knows the code
It’s not about the salary
It’s all about reality and making some noise
Makin the story – makin sure his clique stays up
That means when he puts it down Tak’s pickin it up! Let’s go!”

Tak: “Who the hell is he anyway?
He never really talks much
Never concerned with status but still leavin them star struck
Humbled through opportunities given to him despite the fact
That many misjudge him because he makes a livin from writin raps
Put it together himself, now the picture connects
Never askin for someone’s help, to get some respect
He’s only focused on what he wrote, his will is beyond reach
And now when it all unfolds, the skill of an artist”

Ryu: “It’s just twenty percent skill
Eighty percent fear
Be one hundred percent clear cause Ryu is ill
Who would’ve thought that he’d be the one to set the west in flames
And I heard him wreckin with The Crystal Method, “Name of the Game”
Came back dropped “Megadef,” took ’em to church
I like bleach man, why you have the stupidest verse?
This dude is the truth, now everybody be givin him guest spots
His stock’s through the roof I heard he fuckin with S. Dot!”

Even if the rap public finally gives Shinoda his due for the rhymes and recognizes that artists like Black Thought on “Right Now” and Common on “Back Home” wouldn’t be fucking with him if he wasn’t aight, they aren’t going to listen if the beats aren’t tight. Guess what though? Shinoda produced it, and it’s dope. Sure he had a little help here and there. David Campbell arranged the strings on “Remember the Name” and “Slip Out the Back” among others. Latin percussion on “Believe Me” was done by Bobo (you’ll know him best from Cypress Hill). DJ Cheapshot and Mr. Hahn did scratching on “Feel Like Home” and “Slip Out the Back” respectively.

If you want to know all the rest of the dirty details, read the back page of the liner notes for yourself. What you really read this review for was to know whether Shinoda could pass the test and whether Fort Minor’s “The Rising Tied” was up to par lyrically and musically. I can’t speak for every hard-ass hip-hopper out there who doesn’t like anything rock in his mix, but to me songs like “Right Now” are the perfect amalgamation of Linkin Park’s spiky-haired adrenaline-fueled form of attack with hip-hop’s righteous throbbing bass and boom bap. This album isn’t afraid to attack issues either – the aforementioned “Right Now” is about people who need to feel hope, from drug addicts to soldiers in war-torn Iraq to people in apartments with no heat and no carpet. Of course some of it is just plain braggadocious, like the pumping “In Stereo,” although on “Cigarettes” Shinoda seems to be slyly questioning the conventions of keeping it real:

“Man I love this rap game, mainly cause it’s cool
To add a little spice to the life you been through
Everyone exaggerates a tiny little bit
Make that shit sound more gangster than it really is
You can’t appear weak, man we wanna hear street
We wanna hear you spit your thug over this here beat
Don’t take it as sarcastic, I can’t enough, I’m tellin you
You can call my bluff, if it’s not rough, then I really don’t need it
I’m not even ashamed
I got too much reality that’s fillin up my brain
So sell me on that product, I’m addicted to the game
Suck it up like a cigarette, light it up man”

For those who were already feeling Linkin Park, even just a tiny iota, the leap to Fort Minor and “The Rising Tied” won’t be a hard one at all. Even the most jaded underground MC listeners might put down their Pharoahe Monch records for a minute to give this one a spin though. Unintentionally this review may have poisoned you with TOO MUCH information, because if you go into “The Rising Tied” with no preconceived notions about what it should be like based on Shinoda’s history, you might actually surprise yourself as to how dope this album really is.