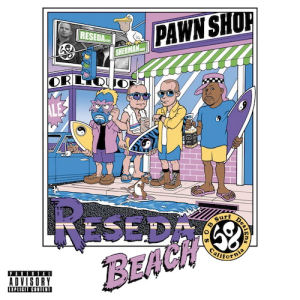 Styles of Beyond :: Reseda Beach

If I had to make a short list (say under 10) of rap groups in 1999 I expected big things from in the century to come,Styles of Beyond would not just have qualified – they’d have been damn near the top. Ryu and Takbir not only sounded like the cutting edge of hip-hop, they practically sliced and diced their competitors into little bits. While their second album “Megadef” was far from a disappointment musically, the long time between albums was not a good sign of things to come. A partnership with Mike Shinoda of Linkin Park fame produced one collaborative album but ultimately seems to have hindered their career even further, as no S.O.B. album ever came out under his imprint, and it seems both sides (amicably) parted ways.

In order to abbreviate an otherwise long tale, it’s fair to say if you didn’t know the name Styles of Beyond in 2012, you couldn’t be faulted or blamed for it. The rap genre is less forgiving than most when it comes to staying relevant, and two years is an almost generous length of time to go between albums to stay current in the scene. S.O.B. is pushing aDECADE. You can count a mixtape they did in 2008 if you like, but that’s still four years, and if you count the Fort Minor project with Shinoda that’s still seven. Critic and reader are one in the same here when these questions are posed: “Why should I give a fuck about these guys in 2012? Can they be that hot after so much time off? Aren’t they going to be out of touch with today’s trends in a rapidly changing culture? Have their skills resulted or are they still Ginsu sharp?”

“Bought the record every day, never trip what it costed
All you wanted was to put some more chips in my pocket
Way before the world tour and overseas and big stuff
When Cheapshot was still spinnin valley bar mitzvahs
You always had a seat, rollin right there with us
In the car drinkin 40’s out in front of them shit clubs
You ‘member them, 25 fans would line up
But nobody gave a fat frog’s ass or why was
Times up, 9 months later put the smack down
Signed to Machine Shop, Warner got my back now
Funny how they all flipped up when they see me
‘Yeah he think he doin big shit cause he on TV’
Yeah, but that was all planned like it or not man
You hatin from the couch goin ‘God daaaaamn!'”

“Damn” might be the proof. (Please note Michael Buble is not on the album release version.) I’m not sensing a dull edge here – in fact Ryu and Tak seem fueled by the fact they had big plans when they signed with Shinoda’s label (referenced in the verse above) and they were ready and eager to take on anybody who disliked them getting mainstream airplay following their Fort Minor success (and indeed “Remember the Name” put them right on the precipie of it). The Vin Skully and Cheapshot produced track finds them staying close to their roots though over a whimsically boom bap piano ditty, fondly reminiscing over the trials and tribulations it took just to get to the level they’re at. It’s not surprising that Shinoda still retains an executive producer credit on “Reseda Beach” given much of this material is from an album he should have released himself years ago, but the pleasant shock here is that none of it sounds dated. I don’t know if the Aqua produced “Take That” was done a while ago or yesterday, but it would be dope last decade or this one. A cameo verse by Celph Titled takes this one over the top, making the whole thing sound like theme music for Black Dynamite.

Celph: “FLUCK – this whole bitch; DUMP – the whole clip
Oh shit! DemiGodzillas, them boys are so sick
I’m not bogus, I’m excellent at this rap stuff
And you ain’t prejudiced if you runnin fast from that black truck
Just ask us, cause we in the back, with a sack of ‘dro, co-44’s
We street boys, across the globe, you +Beach Boys+ in Kokomo
I’ll strip a hoe, for all she got, that’s how we do in that Dirty South
I’m Noah’s Ark, transportin wolves, open up the do’ and let the birdies out”

I like this song so much I would have provided you a clip, but I couldn’t find one without a DJ talking all over the intro. It’s not as though there are a shortage of songs to choose from on “Reseda Beach” though. The Apathy produced “Call My Name” both cements the Demigodz relationship hinted at by Celph and delivers a fast paced two minute arsenal of punchlines like “yeah backpack rapper I guess/but I wear it in the front like a suicide vest.” They may or may not have beaten Lupe Fiasco to the “Dumb It Down” concept depending on when this was recorded, but their take on it it is just as valid and made more humorous with a “Surfin’ Bird” sample by The Trashmen. If the songs of “2000 Fold” sounded ahead of their time in ’99 then Vin Skully’s backdrop for “You Love Us” achieves the same effect, an odd but compelling series of synth stabs and change-ups that decides to “Rock the Bells” here and there for the hell of it. Oh and speaking of the DGZ, they aren’t just one and done cameos – Celph raps on “Shut Everything Down” and Apathy appears on “Dunky Fividends,” each bringing the flavor when they do.

To be fair I’m not sure whether to be happy or bummed out that there’s a J. Dilla track called “Hard” on this album. The track is unquestionably dope, and as many delays as there have been in S.O.B.’s career, it’s not hard to believe this song dates back to when he was still alive – not a Johnny-come-lately buying one of his catalogued beats long after his demise. In fact it’s so good that it probably should have come out years ago as a single – not that it necessarily would have gone mainstream but every underground mixtape and club DJ would have been bumping the shit anyway. Ultimately I give up trying to date this material though because songs like the Skully and Cheapshot collaboration for “Sugar Honey Iced Tea” is dope in 1999, 2005 or 2012 – take your pick. Let’s not point fingers at these Cali rappers for slacking on their discography, Shinoda for not promoting them when they were under his thumb, or the industry as a whole for not finding a place for them when they were so hot. Let’s just be glad “Reseda Beach” finally came out and no longer matter how long the wait, it was worth it.