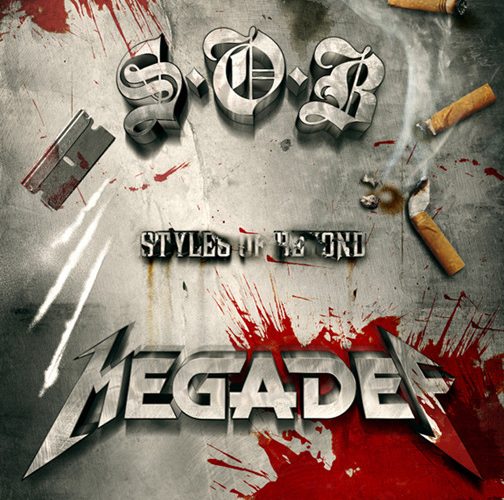 Hailed as an underground classic, “2000 Fold” took us to styles beyond average hip-hop, no pun intended. Ryu and Takbir crafted refreshingly different raps: “Easy Back it Up,” “Spies Like Us” and “Winnetka Exit” just to name a few. The duo seemed to delight in challenging the conventions of rap with every word, by turns imaginging themselves as fly secret agents that could outbomb James Bond then in the next breath having to beg for a dollar for gas. Their wit was matched only by their beats, clearly making their LP one of 1999’s most creative and innovative releases. The album is still as relevant today if not moreso (especially in a land of stale imitations of Nelly and P. Diddy) so if you’re not already familiar with these S.O.B.’s, cop “2000 Fold” first then finish this review.

Four years later after a slew of twelve inch singles and cameo appearances in the soundtracks for video games (you can peep them in Tony Hawk 2 for example), the Styles of Beyond are back to get “Megadef.” The album’s name and logo are a parody of that Dave Mustaine fronted group loved by so many rockers worldwide, but the connection goes a bit deeper. A few of the songs on this CD are surprisingly crunchy, such as the metal riffing on “Be Your Dog”:

“Another half-assed hit out now
We used to chill ’til that motherfucker fit our style
It’s kind of funny how, you and your friends are small town
Act like you got somethin big to draw down
Silly, product abuse, soakin up the shine
Cause when you rhyme you sound like both of us combined
And don’t act like you don’t know
You and the group couldn’t hold it down solo
You full of poop so I’ma scoop the feces and put it in the Pamper
Let it drag any time you call I won’t answer
Punk get a cab and a ride for free
You a little kitten that shouldn’ta climbed the tree
Now you stuck with the truth ’til we dig up the bones
I fill pregnant, birth to invisible clones
So for nine months of whack raps, watched you grow
With your backpack clown, you sound sloppy though”

Although the heavy metal stylings of “Megadef” are an interesting novelty, heads really want to know that the flows are still in effect for Ryu and Tak. Fear not, songs like “Pay Me” featuring 4Zone prove that ain’t nothin’ changed but the year on the calendar:

“I remember forever what I would do to get better
When I was cruisin with Mecca that’s when the crew was together
We use the music to sever ties, for the people in disguise
Never mind, never stop, never look back though
Just keep on goin RIIIGHT?
So that’s what I did, when I got up in the crib
Just writin, splittin my wig, hmm
Can’t even think, got a block I’m stuck
So I had to turn around and dig, uhh
Reach reach, pull out somethin
I don’t really know but the beat keep bumpin
Round and round we go pound a round below sound at every function
There it is, turn it up, that’s what I like
When I’m on stage, live, on the rap with the mic
And the people in the front wanna clap when they’re hype
And those that smoke wanna pack in the pipe”

The bumpy beat enables the duo to flow viciously on this track, and they exhibit tremendous breath control in the process, of a caliber usually associated with names like Pharoahe Monch and Ras Kass. Their raps often wryly use gangster cliches to comic effect, such as the snaps “Takin the game back, point blank, aim gats/we both dope from the same cocaine sack” on “Outta Control.” Or take the droll humor of Vin Skully and Cheapshot’s beat when combined with Tak and Ryu’s flows on the lead single “Mr. Brown”:

“Aiyyo, crash the gates, aiyyo pack the place up
Break stuff, takin all the paper
I’ma stay laced up, keep a shank tucked, take a paycut
Even let you keep the dang paystub (really?)
Say somethin punk what? Put away the blank gun
Fakes wanna talk about bank but they make none
Live from the sweatbox, suckin all the props up
Pop some, lookin for the fox hunt, peace”

This is all brought to full tilt by the scratched in chorus of Prodigy samples saying “Rock 40 inch cables – what the drilly with that though, dick blower?” Humor is definitely part of the Styles of Beyond game, but it can also be handled nicely by guests like Apathy and Celph Titled on the song “Playin With Fire.” The latter is never short on punchlines:

“Word on the streets is that I’m hellbound cause I bully Christians
But I stay up in the armory, developing pulley systems
For altar grenades, strategically on stage with heaters illegally
Got the sound man shook of my vocal frequency
Back at the crib, it’s better strap on a bib
Cause when I’m bustin off the tip of her chin
Chickens and hens…”

Though the Styles occasionally hard rock it up a bit on songs like “Live Enough” and “Superstars” there’s enough of the S.O.B.’s you already know on songs like “Round Em’ Up” and “Bleach” to keep you vibing straight from their last LP to this one, despite the four year gap between releases. It’s like the Styles never left really, and while this album isn’t the revelation their debut was it’s definitely another one worth copping.