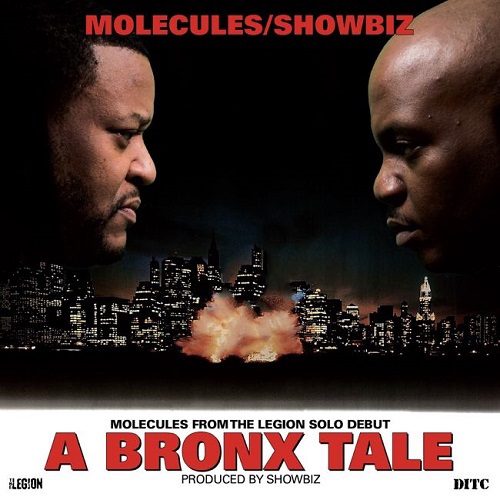 Late last year A Tribe Called Quest set a record in rap by returning with a new album after an 18-year hiatus. The genre continues to set new milestones for itself as it progresses, but what we have here is a rather peculiar one. As advertised on the cover, “A Bronx Tale” is the ‘Molecules From The Legion Solo Debut’. Now what you need be aware of in this case is that The Legion, at the time loosely affiliated with Native Tongues fringe group Black Sheep, have one regular album in their discography dating back to 1994. More recently the Bronx crew revisited their brief time on the scene by releasing old and new material, culminating in the “Lost Tapes” collection on Ill Adrenaline in 2014. Let’s just say that in the big scheme of things a Molecules solo debut is not exactly what the world has been waiting for. Personally I’d be more excited to hear from long lost Coup member E-Roc, or from Leader of the New School Charlie Brown, or from Down South’s Shawn J Period. In whose cases I still couldn’t fail to note that their solo ventures would come roughly twenty years too late.

But this is hip-hop, where you get recognized for what you do, not what you could have done. For “A Bronx Tale,” whose 6 songs amount to an EP, Molecules hooked up with his BX brethren Showbiz of Showbiz & A.G. fame. Back in 1992, The Legion had their own interlude on “Runaway Slave,” and, according to the “Theme + Echo = Krill” liner notes, in a distant past Molecules once went by the moniker Cutmaster Marvy D. So you know that in hip-hop Big Man ‘Cules goes back like Robert De Niro and Chazz Palminteri’s coming-of-age crime drama set in the ’60s that “A Bronx Tale” borrows its name from.

It also borrows a (slightly edited) monologue from the movie for its opening, including a crooning doo wop group, the like the film’s youthful narrator identifies as having sung “on every corner, back then.” But Molecules and Showbiz’ “Bad Guy” (which also features Money Ray) switches over to ‘Scarface’ after the first verse, and the song’s actual beat falls in line with the updated, sleak and sparse D.I.T.C. sound. The following “Good Life” intensifies the emotions with the kind of euphoric, soulful backdrop that ruled rap at the beginning of the 2000’s. “My life is like a motion picture,” boasts Molecules as he spins yarn about expensive cars, liquors and ladies. On the other hand “Yo man, these niggas doin’ popcorn music, and now they wanna go hardcore – I’m f—in’ confused” is a very 1993 sentiment, and “Hardcore” sounds very much like it, also thanks to Show’s vintage beat. When Molecules asks rhetorically, “You wanna go hardcore? It’s too late,” you can’t help but wonder who he could possibly be talking about in 2017. As the main star threatens to “get medieval on these niggas” while he’s always a step behind the beat, Black Sheep Dres saves the track with an on-point performance.

Conceptually, “Heist” draws on “Revenge,” the duo’s mid-’90s collab whose retroactive release in 2014 inspired the sessions that now resulted in “A Bronx Tale.” The ‘to be continued’ cliffhanger practically never works for rap songs, but Molecules goes with it anyway. Like The Legion’s “Lost Tapes,” the EP’s make-up is essentially a little bit of new mixed with the old. And old isn’t necessarily a good thing, even when we’re dealing with veterans. In all honesty, the rapping here is more than a little rusty. Generally, Molecules and Showbiz resort to existing ideas, whether it’s the umpteenth reference to Melle Mel’s “The Message” or Biggie Smalls’ ‘crack rock/jump shot’ option (“Jungle”). “Methadone Rap” expectedly samples Jadakiss (off the “Made You Look (Remix)”) while ‘Cules and his fellow Legionnaires wax nostalgically about later ’80s New York. Cee-Low:

“You heard the stories ’bout Rich, ‘Po and Azie
Fast lifestyles and how the ’80s was crazee
The Rooftop the prime place to be
Hollywood, Lovebug Starski and Brucie B
At this time no other city was liver
Dropped knowledge on a sucker, kill a 85er
Stick-up kids on the rise
Crack had us f—ed up, lil’ niggas outside yellin’ ‘2 for 5!’
Yeah, we fell for America’s traps
30 years before ‘racks on racks’
You see, we the result for stackin’ blacks on blacks
You had the hook-up with cook-up, then get your wig pushed back
Iron Mike the youngest heavyweight champ
Before EBT and credit card food stamps
Now Mayor Koch, he had the blocks on lock
Larry Davis on the run from the cops
Shi…”

“A Bronx Tale” can be seen as part of a recently launched D.I.T.C. renaissance, key member Showbiz reporting back for duty after a longer unproductive period not just with this here EP but also a new Showbiz & A.G. album. With a bit of luck, Molecules and The Legion could ride the momentum that people like Meyhem Lauren or Roc Marciano have created. They won’t be able to take their career much further than where they were with “Theme + Echo = Krill,” but the mere existence of this EP is a testament to the strong bonds that still exist in the Bronx and the will of these longtime participants to uphold the legacy this storied borough has in hip-hop.