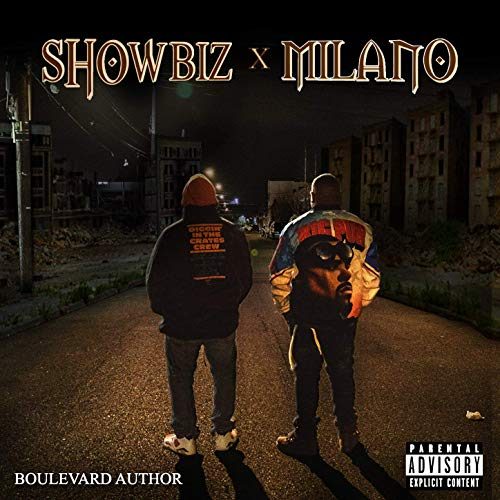 D.I.T.C. (Diggin’ In The Crates) crew remain an institution in New York hip hop so it’s always welcome when they release new music. Milano and Showbiz have both been actively dropping albums on an annual basis, and while it often lacks the creativity or reinvention to truly stand out, “Boulevard Author” is another worthy addition to their catalog.

With Milano’s gruff delivery, Showbiz has crafted grime and dirt for the Uptown emcee to get busy to. It’s the energy his “A-Room Therapy” release last year needed a bit more of, and right from the start, Milano is sending rappers to the “Guillotine”:

“Francis Ford Coppola
Real estate with the ocean front
I’ll still give you an open cut
Toast to us and this life we’re livin’
Michael Knight-vision
Serenading you with the mic malicious
Michael Rapaport
Supreme Court elected Kavanaugh
F*** it, my n****s still carry soft
Or that hard stuff, had to swim with river monsters
And anacondas, we’re just n****s with honor”

There’s a reminiscent mood throughout “Boulevard Author” as if Milano is strolling through the area he grew up in. He chooses to “Reminisce”, as many artists do, but it’s well-worn territory and feels a little stale despite Showbiz’ funky beat. The production throughout definitely knocks nicely, with a midnight stroll through urban backdrops aided by the air of doubt on “Chips” and the dangerous side of the streets as highlighted on the track “Boulevard Author”. There’s a moment where Milano shares how he discovered a lump on his neck and experienced six months of chemotherapy, which explains the reflective mood the rest of the album assumes. One of the best tracks is “Champion Sound” for it sounds as celebratory as Milano feels, without the rose-tinted glasses restricting the content. This ultimately plays out on the last two tracks, “Stripe Bass” and “Opportunity”, as Milano reviews his path and highlights how grateful he is to still be around.

At 31 minutes, Milano is alone yet never overstays his welcome. A guest verse here or there, particularly from OC or AG would have added a bit more replayability, but “Boulevard Author” is largely solid material from two veterans.