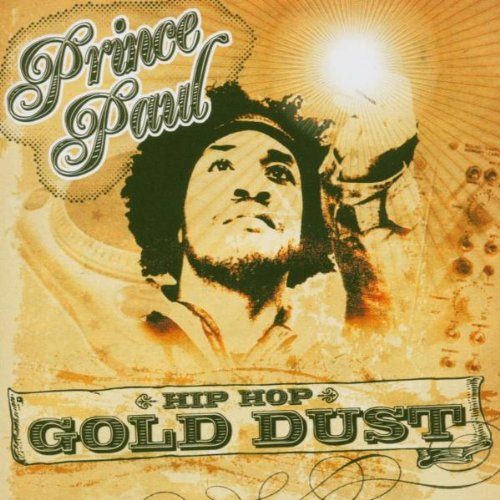 In some cases an album like “Hip Hop Gold Dust” would be considered a compilation album of various artists. The “various artists” part of that sentence defiintely does directly apply to “Hip Hop Gold Dust.” It’s not often you’ll find an album with such a diverse array of artists and songs. From De La Soul to Justin Warfield; from Gravediggaz to Resident Alien; from LA Symphony to Last Emperor they’re all sprinkled with “Hip Hop Gold Dust” on this album. What’s the common theme then? Simply that the one shaking out the dust on their heads is none other than Prince Paul. As legendary as he is eccentric, Prince Paul is the mastermind behind some of the greatest hip-hop beats of all time. Left to his own devices he comes up with unique conceptual albums like “A Prince Among Thieves,” a complete movie told through two underground rap artists portraying the lead roles in skits tied together by songs from the likes of Kool Keith and Big Daddy Kane. Of course he’s also well known for his series of Handsome Boy Modeling School albums with fellow demented producer Dan ‘The Automator’ Nakamura; and he even produced an album where he seemed to psychoanalyze what it is that makes him tick.

Yes Prince Paul is out there, way out in outer space, but the most remarkable thing is that you wouldn’t glean that from the individual songs on “Hip Hop Gold Dust.” The most important thing about Paul isn’t that he’s a well loved eccentric rap producer. To put it plainly Prince Paul is just a damn good producer PERIOD. If you want a track so clean you could eat off of it, Prince Paul is your man. If you want a song with crispy drums and a melody that sticks in your head for days, Prince Paul is the one to call. Tight bass and big beats? Prince Paul again. Some will argue that Paul’s career is so esoteric that you can’t cite individual tracks that are dope, but off the top of my head Big Daddy Kane’s “It’s Hard Being the Kane” and De La Soul’s “Me, Myself and I” rank as two of the greatest rap songs of all time. Shockingly they didn’t make the cut for “Hip Hop Gold Dust,” although true to his nature Paul seems to be avoiding the stereotypical “best shit I ever did” self-congratulatory album. What Paul instead opts for is to present great songs that may to date have been overlooked, such as the song he produced for the “A.I.D.S.” compilation called “No Rubber No Backstage Pass”:

Chubb Rock: “From the crisp clear era that’s the point of ‘The One’
The unique critique, from the crumb, me neva done
I check them then wreck them let them fall into my spectrum
Then the Punky Brewster kids they, squeeze like rectums
I become monolithic then rip it the remains I sip it
My hat I tip it, cheerio, kid and here I go
Off beat slackin, but the platinum mediocre rappers
with the corporate backers interfused to grab SAG actors
The, acoustic suits it, the boys juiced it then boost it
It kinda Gravedigs, well it should, Prince Paul produced it”

Ahh yes, the Gravediggaz. In theory this should have been one of the greatest hip-hop supergroups of all time. The membership included Wu-Tang Clan’s RZA, Stetsasonic rapper Fruitkwan, underground rapper Too Poetic (R.I.P.) and the production of Prince Paul all interlocked in a common theme of “shock and awe” with graphic raps that provided camoflauge for more subtle points like “resurrecting the living dead” – the notion that if you’re not aware of the world around you then you’re not really alive at all. Several classic examples of this all too brief collaboration (which slowly and steadily fell apart after the first album) appear here, including “Constant Elevation”:

Too Poetic: “Diggin graves see, pays my rent for the day
Some hate the image that I must portray
Critics, say “Go to hell” I go “Yeah,
stupid motherfucker I’m already there!”
Fru-strated, mentally aggravated
to be the rebel that society created
I’m good most times but when I’m foul then I’m flagrant
Livin in the shadows like a government agent”

It’s no mistake though that some of the best “Hip Hop Gold Dust” to be mined out of this album is tracks that for one reason or another remained completely unreleased until this CD hit the market. Among these forgotten classics is the truly remarkable gem “The Monolith” by Last Emperor. As the name would imply, this is a tall and imposing song from a lyrical wizard who is still struggling to get the kind of recognition he truly deserves:

“I stare into the face of death
And the fear that’s so obvious
Wordplay is the way that I conquer it Chivalry’s not dead if the living honor it
I send a message to men, on all continents
And this is my imperial decree
To who-so-ever steals material from me
The MC who comes with new abilities
In the same manner King David slew the Philistines
Cause when it comes to MC’s they leave you
no choice but to destroy the embodiment of evil
Deadly force against the source of upheaval
That seems to, oppress and bring death to my people
The way to defy this death
is to keep kickin rhymes until there’s no rhymes left
The Emperor takes the form of the giant Dredd
With the body of a man, and a lion’s head”

There’s so much to like on this album it’s hard to really list it all. It’s worth noting though that the version of “1-800-Suicide” by the Gravediggaz included is not the one heard on “6 Feet Deep” but rather a rare (and dope) RZA collaboration with completely different lyrics. Equally dope and hard to find tracks include Stetsasonic’s “Stet Live WNYU,” Resident Alien’s “Shakey Grounds” and Sha of Horror City’s “Big Sha” featuring Jaz O La (you may recognize Sha from “A Prince Among Thieves”). It’s hard to pinpoint any one style or sound for the songs throughout because Paul’s eclectic nature touches all points on the map. He’ll come with a smooth R&B style piano groove on “Sucker for Love,” come with a swinging boom bap on Justin Warfield’s “K Sera Sera” and then go totally off the deep end with “Prince Paul vs. The World.” Needless to say if you like your albums predictable and easy to follow “Hip Hop Gold Dust” is not for you. It’s a journey through the mind and style of a man whose ideas are often not appreciated fully even among his target audience of hip-hop heads. If you’re down with Paul though or looking for some truly unique and dope shit, this one’s a can’t-miss.