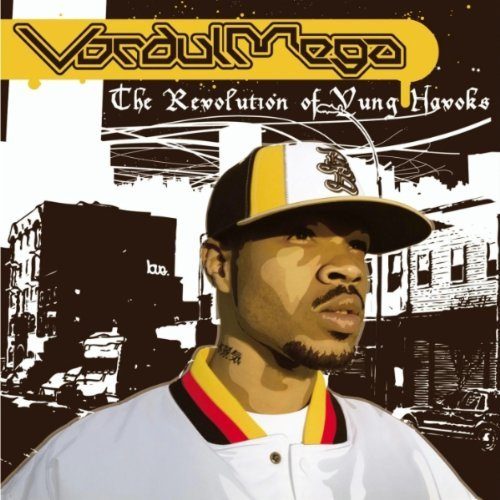 If there was ever such a thing as conscious gangsta rap, then Vordul Mega would have the genre on lock. His solo album, “The Revolution of Yung Havoks,” is best described as a mix of those two extremes. On the one hand Mega spends his time chronicling the hardships of his life and the toughness required to make it in his hood. But this bragging is not empty, violent, or ignorant in any way as Mega complements the harsh narratives of his life with positive messages. Mega never outright claims to be a gangster or thug, instead telling his story through the view of a kid who grew up in the ghetto but stayed on the sideline. The concept is definitely a fresh one in today’s rap scene, but the results end up being as mixed as the idea that generated them.

The album’s strong point is the music Mega chooses for the tracks. Production is handled by mostly unknown producers, including 6 tracks by a cat named Belief, but the results are solid at worst and in some instances stellar. Overall the music is a soulful mix that treads the line between commercial and underground with uncommon grace. “Neva Again” might be considered the obligatory track with a sped-up voice sampled, but it works very well mostly due to Opto’s use of strings. Ruddy Rock really comes through with an ill beat on “Spitamatic” where the piano loop is nicely matched with a deep brass track and eerie stabbing strings. “Blade” is another standout track with a more upbeat melody that will keep any head nodding. There really isn’t a bad track musically on this effort, as every producer comes through. Even with 7 different producers, the album still flows and is consistently good. While Vordul Mega is considered more of an underground rapper, the beats on this cd will satisfy any hip-hop fan.

Vordul Mega, while considered the star of the album actually ends up being the weak point to what could have been a great album. His choice of topic matter and willingness to address social issues is very commendable, but as an MC Mega does not have the presence to hold it down for an entire album. His voice is unexceptional, a fact which is in no way helped by Mega’s conversational flow. Even when he attempts to infuse energy into his flow, such as on the aforementioned “Blade,” it sounds forced. His boring rap style could be salvaged if the lyrics were good enough to hold their own, but to be frank lyrically Mega isn’t much better than any other rapper out. His positive outlook and social commentary is welcome and definitely fresh, but aside from the occasional one-liner or metaphor the narratives do little to stand out. If it wasn’t for the conscious aspect to some of his songs, Mega would sound like any other hustler/rapper out there. The guests on the album are a welcome addition and help mix things up. Jean Grae shows up for “Believe” where she gives the hook a welcome boost of energy, but surprisingly doesn’t drop a verse. C. Ray Walz’ verse on “Spitamatic” also helps breaks up the monotony of the album. But even tight guest appearances can’t save the album. Vordul Mega isn’t a bad MC by any stretch of the imagination, but he does little to pull away from the pack of rappers flooding today’s market.

Musically “The Revolution of Yung Havoks” is an great album that bangs from start to finish. Lyrically, Vordul Mega gives us an average performance that at times is outright boring. For the right price this album would be worth the purchase for the music alone, but as a complete package “The Revolution of Yung Havoks” doesn’t quite make the grade.