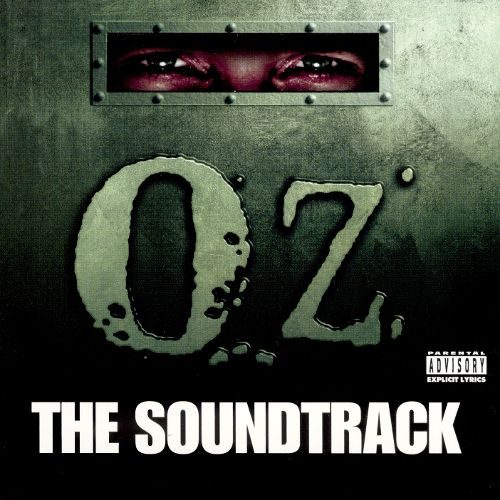 When I first saw this soundtrack something about it struck me funny right away even though I couldn’t put my finger on it. Upon further reflection, I realized what was twisted in my head was the surreal possibility that a resident of the Oswald Correctional Facility (b/k/a/ “Oz”) might actually end up listening to the Oz Soundtrack on his boombox ON the TV show. Clearly, a number of the people locked up on the show love hip-hop, and a few of the actors portraying them have actual careers in rap – Lord Jamar, muMs, and Treach among others.

Despite the fact that such an unhappy accident could burst the surreal bubble enclosing the show’s reality (Oz can’t listen to “Oz”), it’s right and exact for HBO’s illest show to come right with a compilation that is as crazy as Adebisi and hard as Kareem. Hip-Hop’s relationship with prison is not just about Ol’ Dirty’s latest insane act or Puff Daddy’s court case – it’s a deep and brutal knife that stabs through the heart of Black America. Even if you try to deny that America is a racist country, you are forced to confront the statistical nightmares that show black men are locked up twice as often and serve sentences twice as long as other people in the United States. The stain of correctional facilities touches many lives in any urban hell – those who haven’t experienced it often are more likely than not to have friends and family who have.

It should come as no surprise therefore that N.W.A recorded “Fuck Tha Police,” nor that the show’s producers made the wise decision to let hip-hop speak for Oz. They take many views on this album. One is of the actual prisoners portrayed – that fine line between reality and fiction blurred when Lord Jamar raps on “Oz Theme 2000.” There’s also the mournful lament of a young man realizing he won’t see the light of day, as sung-rapped by Krayzie Bone on the excellent “Shackled Up.” Pharoahe Monch may have the most haunting track though: “>What is the Law” actually takes the viewpoint of a racist cop who cracks heads and merrily sends people on their way to places just like Oz.

There are plenty of big name rappers contributing to this release. Kurupt teams up with the ubiquitous Nate Dogg for “>Behind the Walls” and delivers a decent effort, over a decent beat – not really as good as either one can be. Wu-Tang’s “What You in Fo'” is much better; a whining blues-style guitar punctuating the beat while each Wu-Banga tells how he landed behind bars in a verse. This is immediately followed by Snoop Dogg’s bouncy “Land of Oz” – which is definitely a good bounce-rock-skate track but sounds more like it belongs on “Tha Last Meal.” In fact, compared to Snoop’s spooky-assed “Murder Was the Case” song (and THAT is some real prison drama) it hardly holds a candle, though it’s hard to catch lightning twice.

Well known and often used soundtrack contributor Master P turns in “Locked Up” with C-Los providing the beat so some of P’s No Limit family can share the spotlight. Muggs provides a dark and dank piano sound on Cypress Hill’s “Can I Live” where the underrated B-Real continues to shine by spitting the survivalist ethos that often ends with tragic jail consequences. “Tonight” by Drag-On is a typically bouncy Swizz Beatz production, and will appeal to anybody who likes the Ruff Ryders camp. Speaking of double-R, they are also represented by the Styles and Jadakiss duet “Some Niggas” – personally I’ll pass on it.

One of the best tracks comes from Trick Daddy, who seems to have found a niche for encapsulating the pain of struggling in the ghetto – the perfect amalgamation of Master P and Tupac Shakur. “Thug Niggas Don’t Live That Long” is brutal in it’s reality:

“Nigga, now who gon’ die next, who momma gon’ cry next?
Who sister get to wear the black dress?
It’s how we livin tho’, dead and gone befo’ we twenty-fo’
or in jail – but ch’all don’t hear me tho'”

This track encapsulates the strength of Oz – not just a sonic landscape for prison issues, but one built out of hip-hop tracks in a culture constantly at war for survival in America and often with the police. There are some slow moments though. The Southern bounce works on Magic’s “Incarcerated” but doesn’t really hold up as well on Three 6 Mafia’s “War Wit Us” which also suffers from a cheap and badly used sample of the movie “Scarface.” Tez and Tajiee really don’t contribute anything with their fast paced “What Ya Gonna Do” – sounding like they’re trying on Drag-On’s style but only doing it half as well. There are too many excellent tracks to hold it back though – Devin’s letter to prison “Can’t Wait” and the hard-edged track “Ain’t No Sunshine” from East Side Cult more than make up for it. Showcasing a very well thought out diversity of rappers from the East to the South to the West, this album will be a favorite for even hip-hop heads who’ve never seen the show – but if you haven’t it’s a good reason to sign up for cable.