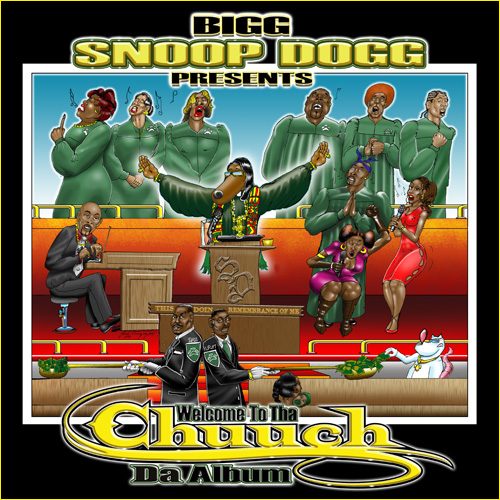 Calvin Broadus is up to something. He’s been pimping his own radio show Talib Kweli had to say about them on his most recent release is even half right, it’s a terrible label for rap artists to be on. I’d want to distance myself from them too. After hearing the opening track of “Welcome to the Chuuch – Da Album” though, Koch Records may want to do the same. That’s a shame really. The close-minded will automatically interpret Snoop’s words as being unpatriotic, but his message on “Sisters N Brothers” is far more subtle and heartfelt:

Considering how many times Snoop has been associated with gang affiliations and murders (accurately or not) some might be surprised that Snoop is advocating peace over war. “Bring our soldiers back/and leave them peoples alone” is not an unpatriotic statement, nor does it imply a lack of support for the men and women serving in the armed forces. Within those simple words is a message of self-determination, and you can draw a direct analogy between Snoop reuniting D.P.G.C. for their own common good and Iraqis of all faiths putting aside their differences to form their own government. Snoop says he won’t “get deep” but you can tell from his having visited Iraq it’s an issue he feels deeply personal about: advocating literal peace in the streets, whether at home in Long Beach or overseas in the Middle East.

It’s not all that serious on “Welcome to the Chuuch” though. Newcomers Tiffany Foxx makes her booty shake on the Terrace Martin produced “Shake That Shit,” sounding like an interesting cross between Foxy Brown and Trina. “Just the Way You Like It” features a brand new R&B group that Snoop unapologetically calls the “9 Inch Dix,” and not surprisingly it’s a hilarious send-up of the genre’s traditional format that features cameos from Soopafly, Snoop and Half Dead. It’s less clear whether “Remember Me” by James is supposed to operate on a parody level, unless that would be a parody of R. Kelly’s more oversexed and uninteresting works.

The rest of the album is a mess. “Real Soon” is a throwback to the earliest “Chronic” days of Dogg Pound Gangsta Clique in it’s lyrics and line-up, but it’s not one of the best tracks Battlecat has ever produced. The uninspiring J. Black croons his way through “Sunshine” and makes today’s overplayed singers sound better by comparison. The potential Tiffany Foxx showed earlier is quickly thrown away on the Ebony Eyez stylings of “Can’t Find My Panties.” Things take a turn for the better though on the all-star “We West Coast,” a Josef produced track with just the right amount of bubbling bass bounce and gangsta rhyme:

Daz: “West West y’all, coast with the most back reppin it
Anybody get out of line, homey we checkin it
Ain’t no half-steppin, constantly packin a weapon
On them D’s, front to front, and you know that we flexin
Sun shinin like the jewels on my neck
The Western Conference, yeah that’s how we connect
Perfect style that’s unique, so complete, and we’re them niggaz
keep it poppin and we settin the tone on the street
I down me a fo’-oh, ride real slow
With K-U-R-U-P-T, my cousin D-O-double-G
It’s just the thug in me, I play the role
Just to let you motherfuckers know we back in control”

If every track came off as nice as that joint or “Notorious DPG” featuring Lady of Rage and RBX, this mix would be an undeniable classic. Unfortunately the elements that would make it work are just not there. Daz is a wizard on production and should have been behind the boards, not to mention featured on the mic more often. Kurupt has always been hit or miss as a lyricist but his signature voice made so many DPG tracks as a crew or a group pop off – he should have been used more too. Singers like Wendi & YN really offer nothing to the hardcore DPGC fans this album is marketed at, while J. Black and James are best skipped over entirely. I appreciate the unity Snoop is advocating on a whole range of different levels, but the nostalgia he evokes with his “Welcome to the Chuuch” radio show is not found here. Admittedly it’s a different kind of nostalgia – early 90’s Death Row gangsterism versus 70’s P-Funk, but if you’re going to go back for the throwback you’ve got to go all the way even if the colors sometimes look foolish.