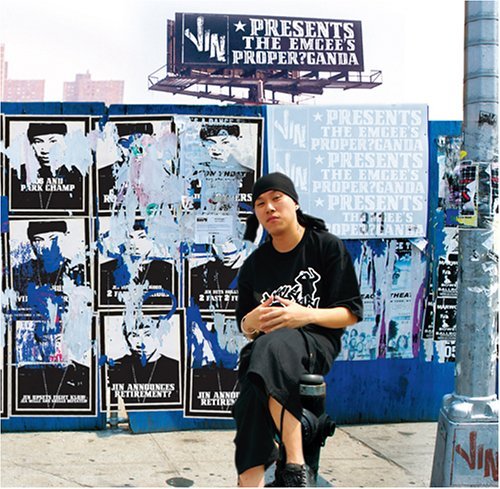 What a difference a year makes. Last October when Jin’s long-awaited debut “The Rest Is History” hit store shelves, he seemed like the MC designated to carry the standard of the Ruff Ryders clique for the next decade. The hype machine that carried him to that plateau was a series of appearances on BET which cemented his freestyle credentials. Far too many audiences have been quick to knock somebody not brown or black before even hearing their rap, but the 106 & Park crowd acknowledged the budding rap star with the Chinese ancestry as one of their own. Like KRS-One said years ago: “A dope MC is a dope MC.” True dat. From light to dark, it’s all about making the mic spark.

What should have been their greatest triumph since DMX launched them into the spotlight in the 1990’s ended with a whimper instead of a bang. Jin’s album was successful in the underground and his “Tsunami Response” written to criticize callous radio DJ’s who poked fun at the colossal human disaster just over a year ago today kept his name out in the public’s eye well into 2005. KRS-One’s quote from “Step Into a World” above isn’t finished without the second line though: “With or without a record deal, all can see.” Jin himself didn’t seem to want one, announcing his retirement in May of this year. When the Ruff Ryders collective presented a rather lackluster musical redemption of their legacy, it was almost to Jin’s advantage to be so sparingly presented on it. Then Jin shocked people by returning this past September, announcing he had changed his name to “The Emcee” and was planning a return album. That begs the question of whether The Emcee with or without a record deal all can see.

“The Emcee’s Properganda” won’t answer that question. Jin still uses his old rap name to “present” his new one to the public, hoping to at least convert some of that original Ruff Ryders audience despite the limited amount of support and exposure they gave him. As The Emcee he appears to have established an imprint called Crafty Plugz, but it’s the independent label The Rest is History” was easy to find anywhere from Target to Best Buy, this album was the exact opposite. In fact this reviewer visited one mom & pop store 6 times over a month’s span before they finally got in ONE copy. It’s really not shocking Draft doesn’t have much distribution muscle – the only other artist they have listed on their website is Consequence and half of the links you can click are “under construction.” Not good. Then again the artist formerly known as Jin can still use their limited push to put out a self-proclaimed list of the “Top 5 (Dead or Alive),” a surprisingly humble one given he doesn’t go the usual rap route of proclaiming himself among them:

“Mic skills ain’t got nothin to do with ya gender
Clef’s ill but L Boogie was my favorite member
Out the Fugees, the tightest to drop
Latifah’s the Queen, other chicks are _Lyte as a Rock_
Before N.W.A’s family feud
Who kicked that gangsta shit like Eazy-E and Cube
But still true lyricists smashin the cuts
up, verbally like Ras Kass and Kurupt
E-40, Mac Dre holdin down the Bay
Still doin the Thizz even though he passed away
Rest in peace, it ain’t about West or East
coast beef, the media can be a beast
Overnight acts just wanna top the charts
No intentions to contribute to the art
I absolutely refuse to let it fall apart
The Emcee is crafty we here to make our mark
They wanna know”

The name may have changed, but at the heart of it all The Emcee has stayed the same. He’s always been a nimble-tongued, strong-willed, smooth voiced rapper who puts as much thought into his words as to the way he flows them. It should be no surprise that The Emcee is not waiting around for anyone to make a mark for him. With “Carpe Diem” he lives up to that motto and not only seizes the day but control of the beat with his mic technique:

“Yo, yo, I’m part Emcee, part shaman
Resurrect dead poets through the art of rhymin
A professor with extra hard assignments
Inspired by the stars alignments
I cause defiance with bars of science
Devour my prey like the jaws of lions
In layman’s terms, you lames can burn
My course only for those that came to learn
The proper mechanics, how to use the linguistics
Like the X-Men a school for the gifted
But before you can rock the crowd
I make you walk on hot coal no socks allowed
A simple test that’ll set fire to the best
I represent the IQ’s higher than the rest
Heard the wind whisper, sent the breeze my way
Carpe Diem yo I gotta seize the day”

“The Emcee’s Properganda” may frustrate Jin’s fans a little bit though, and not just because the name change and new label made it hard to find, or because he seemingly changes his mind more about retiring than a professional wrestler. Jin’s raps were fairly strong throughout “The Rest is History” and they are here too, but he lived and died by the beats on the last offering and in this case it’s only been exacerbated. The Golden Child is not by any means a terrible producer, but he’s not exactly an inspiring one. Swizz Beatz and his Ruff Ryder team were always 100% one or the other – real good or horribly whack. Golden Child on the other hand is always just “there” – neither rising to greatness or sinking below mediocrity. The two examples mentioned above are carried entirely by the strength of Jin’s flow, as “Top 5” feels underproduced while “Carpe Diem” just barely rises to boom bap status. “Perspectives” seems like a cliched knockoff of DJ Premier’s production style, “No More Fans” is humorous lyrically but repetitive musically, and if Kanye West was making tinny tracks with style but no substance “Foolish Little Girls” would be at the top of the list.

This is not to say there’s no reason to cop “The Emcee’s Properganda” though, no matter how hard it may be to find. Whether he calls himself Jin or The Emcee doesn’t change the fact he lives up to KRS-One’s words, and not coincidentally is directly inspired by him as the opening “Emcee Skit” proves. When the beats rise above the middling the results are truly magical, such as the swinging “Mr. Popular” with a clever Big L sample, and the clever “G.O.L.D.E.N.” which rides a fat bassline with a simple beat that seems inspired by the Young Gunz. Jin maintains a sense of humor despite all the trials and tribulations of his rap career, as evidenced by song titles like “100 Thousand Sold Pt. 2.” The sad part is that if he had been an indie label rapper to begin with those would have been great numbers, but when you’re distributed by Virgin Records it doesn’t cut it. This one will probably be a sleeper for 2005, but if you can find it, there’s more good than bad to “The Emcee’s Properganda.” Here’s hoping he has a better year in 2006.