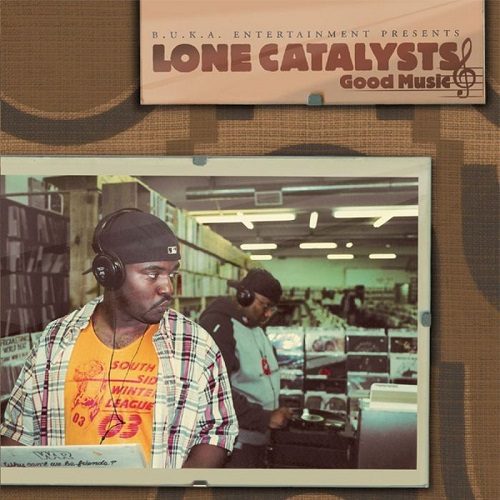 Lone Catalysts’ “Hip Hop” album was one of the most profound hip-hop experiences I had in 2001. In fact in the Year 2001 wrap up, I put this album at #5. Four years later the album still holds up to the perfect 10’s that I gave out across the board. J. Rawls beats put him in an echelon worthy of comparison to any musical maestro worldwide, while J. Sands conversational relaxed rhyme style was some of the best rap to come out of the underground in the last five years. Therefore I am embarassed to admit that in the interim the duo released an album called “The Catalysts Files” that completed slipped my notice, and their latest CD “Good Music” almost slipped under my radar too. Fortunately I didn’t make the same mistake twice, and even though we’re almost out of time for this year, I’ve still got the chance to make it right for the Dynamic J Duo and dish out the dirt on their new disc.

The first thing that’s obvious from peeping “Good Music” is that they’ve gone all out on grabbing guests to join in the fun. If you follow underground hip-hop you’ll instantly recognize a lot of the names: Mr. Complex, El Da Sensai, Wordsworth, Lil Sci, Thes One, Masta Ace, Grap Luva, Asheru, and so on. The second thing that’s obvious about the album is that the team has once again decided to give the people their money’s worth – 71 minutes of material spread out over 19 tracks with no skits or interludes. Even the “Intro” is some funky music – just a half minute’s worth – and doesn’t stop things from flowing quickly into the up-tempo and ominous “Brothers Keeper”:

“The most amazin! Most infamous
Like the mob – no prob’ pimpin this
Magic Don Juan style, stones on my glass
filled with Henny, glowin ‘dro and hash
Makin good music; no more, no less than
I’m not a king, or the jest’ and
pro-black artist with the throwback hardest
Regardless of being chartless, we take the people farthest
Lone Catalysts, that is the foundation
That puts fear in all these clown stations
Thinkin that you know what’s urban culture?
You just commercial vultures – hoverin over the virgin’s altar
Blood-suckin, love nothin”

While this reads like your typical anti-pop rap rant, it’s the way the verbals flow and eerie screaming backdrop that make it more as it builds up to climactic odes to unity like “cause man we’re past _Ready to Die_, we need life” and interjected samples from cult classic film “New Jack City” make the picture complete. This theme is continued on the follow-up “Ones We Miss,” opening with a Biz Markie beatbox and the words “Jam Master Jay, you’ll never be gone, through your cut and scratch, you rock rock on.” WORD. When Sands and Rawls named their first album “Hip Hop” it wasn’t just to impress the backpacker elites – it was something that they would eat and breathe like bread and oxygen. Not only does it sustain and nourish them, it inspires them to give just as much as what they get right back. Take a stroll with Sands “En La Ciudad” to see just what I mean:

“Miss Conchita, yeah she was sweeter than my biggest heater
Caramel tan sexual features but I wouldn’t eat her
The two-seater livin vida loca Rita with the chocha
Shorty skin turned la rosa as I pulled the mami closer, look
I had a partner and his name was Juan
Showed me everything ’bout women cause his game was Don
Dimepieces all day man they came and gone
Homey told their friends how they want me to flame ’em on
Mack chicas magnifiqua Dominican seÃ±oritas
Sayin ‘AY PAPI!’ We lovin it when you freak us
I knew a kid and he owed me pesos
If he wasn’t gonna pay me back, why did he say so
Seen him at the bar frontin, buyin up cervazas
So I walked up to him and I had a razor
Buck fifth him, grabbed his chips and ducked with ’em
Must be loco en la cabeza thinkin I would slip him”

Sands and Rawls are serious about their craft. They don’t just come up with meaningless song titles and try to fit them into the chorus, they craft a concept and make a track that fits into it. The up tempo latin beat by J. Rawls, the smooth way J. Sands slips back and forth between ingles and espaÃ±ol, and the storytelling narrative where he goes from macking mamacitas to getting his money all fit better than a glove around O.J. Simpson’s hand. When you think you’ve heard the smoothest or flyest thing they can do on “Good Music,” they always come one better. I could play “Once Before” featuring Jonell over and over again in the headphones all day – it’s some of the most therapeutic boom bap jazz money can buy. “La La La La” then goes right over the top with horns even Pete Rock would be jealous of, and Donte from Mood comes in perfectly on the guest rap with “I’ma tell you the facts/if the label bought your soul, man you sellin it back/they gon’ put it in the streets and resell it as crack.” The simple drumline, lightly floating melody and drumline of “Afta Da Jawn” is so understated and serene you’d think ?uestlove produced it – Rawls even uses his trademark gimmick of fading down the volume and bringing it back up to surprise you that the song’s not over.

Dole out as many comparisons as you’d like here – you can say that the beats are Kanye West-like on the sly “Survival,” as funky as The Beatnuts on “The Hustle,” as sweet as Alchemist on “The Ultimate” and so forth – but in the end it’s really all of them who should be compared to Rawls. With an incredibly deft ability to suit any track to the grand plan he and his partner Sands construct, Lone Catalysts continue time after time to blow shit up. Even when they purposefully and comically call the final track “Bad Music,” the jazzy piano construction and fresh raps found on it are anything but. Plain and simple – the LC’s can’t be whack even if they tried, and they’d have to try a hell of a lot harder because “Good Music” lives up to it’s name. It’s not quite the measure of perfection that “Hip Hop” was, but few things are or ever could be. In a world of cynical artists jaded by the dog eat dog world of music, it’s refreshing to hear artists who remember the best way to get over is to simply make “Good Music” and say fuck all the bullshit.