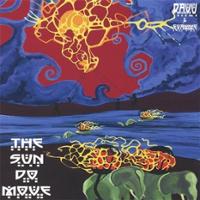 Artwork influences me greatly when forming initial opinions about albums. When I’m about to purchase something I haven’t heard, the artwork can be a make it or break point. I even refused to buy 50’s “The Massacre” because the artwork looked too lazy and uninspired to be worth my hard earned money. While I’m not to the point that I need a photoshopped hummer full of premium pineapples sitting next to a platinum-chain wearing polar bear on every cover, I do like glossy things. Davu’s “The Sun Do Move” would probably not have gotten my dough based on the cover alone. The cover is not a bad cover as it’s actually a very dope painting featuring elephants carrying fire and people trying to capture a sun that looks like the silhouette of a lion at the right angle. The only problem is that it’s different from most rap CD covers. Given the artists abstract name, the abstract album title, and the fact this CD is released on Dove Ink Records it would be easy for the average rap fan to think this was either not rap or on some different shit, some TOO different shit. With that said, the problem isn’t with Davu and his crew, it’s with rap fans such as myself who really liked those old Pen and Pixel covers from the 1990s. Had I been in the position to buy this release and would have let my love for computer graphics consume me I would have probably passed on Davu and missed out on what’s been the best release I’ve heard in 2006.

Davu is a dope rapper who has mastered his craft both lyrically and stylistically. Eyamme is a dope producer who infuses his work with soul and feeling. Luckily the two also have dope chemistry, making for a dope duo. Another dope thing about this release is that neither seem to be ex-dope dealers and if they are they don’t find it necessary to cram a reference to dope into any of the songs on this album. “1234” finds Davu expressing how and why he expresses himself and why he doesn’t listen to hip-hop anymore over a jazzy laid back beat. Davu’s disillusionment with rap doesn’t come off as being preachy or negative and his rap skills back up his right to criticize. The only misstep on the song is the line “you can’t run no more, there’s no shore,” which doesn’t quite make sense since the presence of a shore signals the presence of water hence the end of land, not the other way around. “Mastermind” has a bluesy feel and features Davu once again spitting raw rhymes and reflecting on his career as a struggling emcee. “Now” features equally talented labelmate Illogic coming through for a verse on an uplifting track over a soulful horn driven Eyamme track. “Not A Test” infuses some energy into the album as Eyamme flips a familiar sample and Davu speeds up his flow for a pounding anthem. Eyamme returns to the bluesy samples on “Do Yo Thang” as Davu encourages himself and others to be independent and be true to themselves. The concept may sound corny at first but it’s no different than any street anthem that declares “I’ma do me, you do you.”

The album continues its strong showing with the remaining six tracks. “Basic Sounds” features subdued and soft production and Davu rhyming about taking it back to the basics. “Glory Be” is a powerful song that finds Davu telling different cautionary tales about getting caught up in various situations. The title track finds Davu pouring his soul out on the hook with surprisingly effective singing and complementing that with another solid showing on the mic. “Chicken & Tea” is probably the album’s best track as the sample used on the intro is great in its self and is then flipped wonderfully by Eyamme. Davu comes through with another strong showing on the mic:

“I know this cat named Flash with a little bit of dash
Ran the 4-0 in 4-4 flat, money was fast
On scholarship, he bought a whip, never attended class
Ran all of it, he saw through the windows with tinted glass
Fuck passing the course when quarterbacks passing for sport
They think you got the pass and that ass get bought
Quick-fast, recruiters they mackin, asking your thoughts
Get cash, he never imagined that ass would get caught
WHIPLASH! Crashing, he thought he was Mario Andretti
Broke and bragging he jetty, the car he bought was confetti
The coach is nervous and sweaty
Like “Son that car’s a loaner
You know the alumni own ya, you can’t just do what you wanna”
Woke up the next morning yawning to a newspaper exclusive
These college players is crooked, when offered money they took it
The coaches knew where the proof is, they gotta lose it
Flash put on his party shoes, it was time to face the music and dance
He got expelled, they never gave him a chance
Bus town, back to the city he came from
We stuck in this game we made dumb
Not saying something for nothing,
Some brothers play numb when everyone know they frontin”

“Man Up” and “Time to Go” finish off the album and are as solid as anything else. “Man Up” has rock samples for an energetic almost party-like track. “Time To Go” serves as an occasion for Davu to once again reflect on life, both generally, and in the rap game.

Davu and Eyamme are definitely cats to peep for in the future as well as other Dove Ink Records label mates. Eyamme’s style of production is heavily sample based, but he has a knack for finding samples that not only haven’t been heard but also inject the track with soul and energy. Davu’s strength lies in his mastery of flow and honest lyrics. Taken together or alone both are talented and worthy of your purchase. Their names and the album may seem abstract at first glance, but inside you will find universal music that will surely make your head nod.