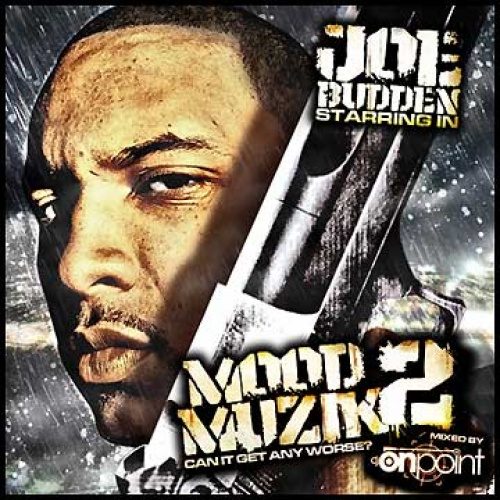 In 2003 Joe Budden had all the potential in the world when he released his self-titled debut on Def Jam. His name was buzzing in the underground due to mixtape success, and Def Jam was eager to capitalize on that fame by putting him in the “Def Jam Vendetta” video game and pushing his song “Pump it Up” to radio and video outlets everywhere. There was little doubt that Joe was gonna blow, and for a little while he did. Then 2004 and 2005 passed, and the anticipated sophomore album never got released. Budden’s official Def Jam website even claimed a 6/21/2005 release date, but nothing ever surfaced. What the fuck? Fortunately Joe Budden is not the type of artist to sit around waiting for his record label to do the right thing. He came up from the street level mixtape scene, and if he has to go back to that level to hustle and make a living he’s sure as hell going to do it.

While vague rumors continue to float that an album titled “The Growth” will be released in 2006, the last significant update from Def Jam on November 28th was that Budden ringtones are available. Ringtones? Get the fuck outta here. JB’s fanbase wants actual songs, and you can hardly blame them. Budden’s reputation has only grown over the years, and the irony is that Def Jam’s reluctance to release his album has made him a folk hero. He’s perceived as a rapper’s rapper, too gangster to be pushed as a crossover act and too lyrical to connect with mainstream fans. Those same mainstream fans have continued to pick up his mixtape releases on a regular basis though, and Def Jam is proving their shortsightedness by not cashing on. Joe and DJ On Point could care less too. The latest batch of unreleased JB songs has been compiled into a mixtape called “Mood Muzik 2: Can it Get Any Worse?” It certainly could if you make the mistake of crossing his path, as evidenced from his lyrics on “Old School Mouse”:

“I came out screamin Desert Storm e’ryday
But as soon as I stopped, he don’t wanna play
Stop sayin what you did for Clue shit, I just laced it
I ain’t even know that dude was doin his tape, sheeeit
Don’t want the fame no more, it’s fuckin with me
Don’t hear _Reasonable Doubt_ the same no more
I can’t listen to _Blueprint_, got a resentment towards Hov’
Tryin to hate on him, throwin in my two cents
They say don’t bite the hand that feeds you
Even if I wanted to I can’t, no teeth to
Don’t get me wrong, still I love Clue and Hov’
But they both rich, so what that got to do with Joe?'”

If there’s one thing you don’t want to fuck with, it’s a bitter angry rapper who’s been starving for three years while everybody else on the label he’s signed to is eating good. You don’t even want to ask his opinion about whether he’s getting paid off the “Gangsta Party” single. “Mood Muzik 2” seems dead set on proving Joe’s point, which is that music industry and his label in particular are fucking up by not putting out his new album when he’s making so many hot tracks in the interim he can fill up a mixtape and put it out on his own. In fact calling this a mixtape is a misnomer – this IS a full length album with professionally produced and mastered tracks. Joe even proves the critics who say he can’t crossver wrong on super smoothed out tracks like “If I Should Die Tomorrow”:

“I woke up around 9, day felt like no other
Kissed wifey on the forehead, told her that I love her
Thinkin as I look for where my car keys at
I know it ain’t promised I’ll be back
See if I died tomorrow, whether from a disease or from a bullet
I wouldn’t be mad, I lived my life to the fullest
I drove cars that I never thought I would
I fucked broads never thought I could
See if I died tomorrow, I’d be in heaven with the folk that raised me
Grandma Jemmy, great-grandma Daisy
Least I’d be around some people that’s just like me
Least I’d be around my Uncle Mikey
If I died tomorrow, I know moms’d probably be hysterical
For 25 years she seen me be a miracle
Seen me come a long way just by bein lyrical
Nah I ain’t religious but God know that he spiritual”

Now who the fuck said Joe Budden ain’t versatile? On one track he can be hostile and pissed off, on the next he can be thoughtful and reflective. Budden displayed exactly this kind of talent on his major label debut but for some reason Def Jam just doesn’t get it. Marketing and promotions people are said to be unsure how to sell Joe to the public. I’ve got an answer for them – how about marketing Joe Budden as a regular dude? A guy just like the rest of us, with real feelings and emotions. He wants to be respected but feels hostile when mistreated. He cares about his friends and family who hope that he’s succeeded. He’s got issues and character flaws like the rest of us do, the only difference is he can spit too. See the fired up Architects produced track “Dumb Out” as proof:

“It’s stuck between platinum and flop, underground and mainstream
Concious, backpack, scratch that, same thing
I’m somewhere between the real and the fakeness
The red pill, blue pill, real and The Matrix
And I can’t take this
If the game needs a new look, I’m a do a tummy tuck and a face lift
And everything I say in these pages
Is straight from the heart, nah magazines, y’all can’t rate this
Cause I’ll be debatin it, it’s a bit outragous
Like it’s an ear virus, and this shits contagious
I’m downloadin like niggaz actually play this
Maybe I’m buggin out, maybe I’m on a spaceship
See I was on my stay out chill shit
The way Mouse kills shit, I’m here just to lay out real shit
Besides, other dudes styles remind me of spinnin rims
That shit got played out real quick
See some wrote him off, some said he was done
Made a joke of, hope he enjoyed the run
I don’t enjoy bein shunned, so I’m back as Neo
Fans enjoyed The One, annoint me as begun”

Joe addresses all the rumors on this track, saying “motherfuckers stopped callin” after “Pump it Up” wasn’t on the radio, and that he can’t leave Def Jam if he wanted to “even though it’s big options.” Best of all though Joe clearly sets himself apart from the pack of other New York rappers with the words “They don’t use the ink like me/Niggaz don’t even THINK like me.” There’s little doubt Budden is highly underrated as a lyricist after listening to “Mood Muzik 2.” The most impressive thing is that Joe isn’t just spitting for the audience. He’s creating his own personal definition of what a rapper is and should be, and expecting the audience to catch up to where he’s coming from. As an MC that this is not a challenge at all even though he claims “nobody likes me, everybody hates me” on “Get it Poppin” because Joe easily connects with the listener.

There are so many hot tracks on this unofficial album it’s hard to even list them all, but just for a start there’s the pulsing “40 Licks,” the blazing Scott Storch gem “Three Sides to a Story,” and the aptly titled “So Serious” joint by C4 among others. It’s clear by the end of “Mood Muzik 2” that Budden is being done a horrible disservice by his record label. Why would Def Jam sign such a talented, introspective, verbose and charismatic rapper and then sit on his work without releasing it, even though he bodies track after track? Thankfully Budden decided not to wait any more and DJ On Point was willing to help him make it happen. Hopefully Joe is getting all the funds from this bootleg album he’s due, or at the very least it’s turning up the pressure on Def Jam to stop fucking around. “Mood Muzik 2” is worth hearing and owning, no matter what methods or means you have to use to go get it.