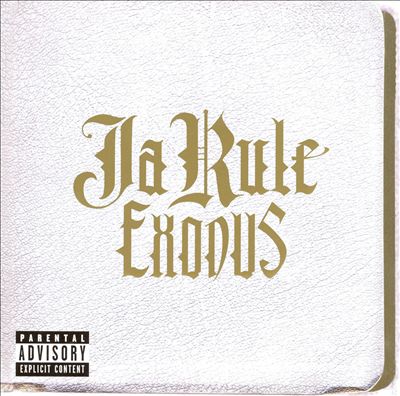 The problem with Ja Rule isn’t that he lacks talent. His lyrics may not be the most incisive or witty, and his rhyme skills rest comfortably below the industry average, but dammit, that doesn’t mean he lacks talent. Who among us has not tapped his or her feet to a catchy Ja club anthem? If life was fair, and Jeffrey Atkins himself wasn’t such an incredible asshole, the public would view Ja as it does R. Kelly (who makes an appearance here): with that perfect mixture of disdain and admiration, multiplied every time the artist shits out another feel-good ass-shaker. You feel bad, but that’s how it is. For his part, Kelly seems to have embraced his perpetual laughing stock status with the hilarious “Trapped in the Closet,” although it’s still up for debate whether that shit is meant to be funny.

Of course, Ja Rule is not a clown and he’s not here to amuse you, and now he’s got a greatest hits album to share. I’d imagine the final version of “Exodus” was a little tough on Ja, seeing as how he’s constantly deflecting criticisms of being too “soft.” Almost half of the songs here are lovey-dovey hug-fests, despite being punctuated with profanity and insistences of gangsta-ness. I like some of them, but still, seeing them all summed up and ordered like this makes me doubt Ja even more. He doesn’t understand the delicate balance between critical and commercial success, and he probably never will. His suicidal feud with 50 Cent, his childish responses to Eminem’s perfect zingers, his weak effort at rehabilitation on “Blood in my Eye”: these things have become etched on Ja’s public persona. All “Exodus” will do is dull the pathetic in favor of the commercial. There is no middle ground anymore, Ja Rule. Embrace the Ashanti.

Since it’s Ja, we get the big dramatic opening in the form of “Exodus (Intro).” There are some snippets from news programs referencing the Gotti brothers trial, which confuses me because Ja wasn’t a defendant there. Irv also gets to rant over the closing bars, causing me to wonder whose greatest hits CD this is. That’s appropriate, because the Gotti/Seven Aurelius beat is really very good. Ja does his thing and it’s okay, I guess, but I still don’t get why he dedicates so much time to rapping about the Gotti indictments. That wasn’t you, dawg. Also, I can’t be sure because he drops the conceit after a few lines, but I think Ja is rapping as a character named Loki here, who besides being a Norse god is also a character in the excellent film “Dogma.” So, that’s something. Next.

Now we get another new one called “Me,” which is Ja Rule’s ego at its best. He’s been doing these braggart raps for so long now, I really don’t have much to say, except that no, not everybody “wants to rhyme like Rule,” because if they did they probably could very easily. “Bubblyâ€¦love me.” See? I just did it right there. Man, this song is bad. The boring beat, the simplistic lyrics. Bad, bad.

Okay, now here come the hits. “Holla, Holla” is first at bat. I personally don’t like this song, although I know many people do. The beat isn’t interesting or catchy, and the lyrics never rise above the level of mediocrity. The next song, “It’s Murda,” is definitely better. Ja’s flow is stuttered and broken up, which is an interesting effect that works well for him. Jay-Z and DMX, you’ll remember, also contribute some nice work. So ends the selections from “Venni Vetti Vecci,” without including the only song I genuinely admire from that album, the surprisingly powerful “Only Begotten Son.” The next two come from “Rule 3:36,” Ja’s 2001 album that arguably catapulted him to ultra-fame. “Put it on Me” really is a great song, but am I crazy or did the radio version include a call-and-response chorus featuring a female singer? She isn’t here, and the song suffers as a result, although we do get a verse from Vita, who just sucks. “I Cry” is another like-it-or-hate-it number. I fall into the “like it” camp. Ja really does tracks like this well, and Lil’ Mo makes it that much better. Good stuff.

“Pain is Love” is the next stop on our Ja discography tour. Quote honestly, I love both of the tracks representing the album: “Livin’ It Up” and “Always on Time.” Their incredible catchiness and wide-eyed optimism are almost impossible to hate. “Pain is Love” was released when I was a drunken, rebellious junior in high school, so this pair of singles transports me right back to Old E forties and Sweet Sixteens. These were, you’ll remember, incredible radio hits (and deservedly so), which lends some credence to my theory that Ja is just another Britney Spears, albeit with a foul mouth and an Ecstacy problem. But yeah, these are good songs.

I’m going to skip the next three, because I find them all trite and uninspired, but for you potential customers I’ll list them: “Ain’t It Funny (Remix),” “Thug Lovin’,” and “Mesmerize.” The latter attempts to recreate all the magic of “Always on Time,” but fails miserably, Ashanti notwithstanding. And no, it isn’t funny, it’s sad, okay?

“Clap Back” is Ja’s official response to the taunts of 50 and Em. First off, it has a great beat, provided by the always consistent Scott Storch. But Ja should realize that there are two types of disses out there: those that dissect and analyze a rival’s career, pointing out the flaws and embarrassments, and those that consist of empty threats of violence. “Clap Back” is the latter. He doesn’t land a single blow on either Eminem or 50 Cent, unless you count “Em Laden” as a witty insult. And I don’t. All in all, this is a waste of a great beat.

Next is “New York,” featuring Jadakiss and Fat Joe. This is a good song, and Ja’s verse is well-timed and interesting, despite being overshadowed by the two superior rappers on the track. Then it’s on to “Wonderful,” another attempt to recreate the Ja Love Magic. It doesn’t work so well. Sorry, it just doesn’t, although the little girls probably like it.

Then we get “Never Again,” and that’s out of order! This came from “Pain is Love.” What’s going on here? I thought we were in the latter part of Ja’s career. Well, whatever. This song is pretty good. It’s one of the times when the half-singing/half-rapping dynamic works well. See, he’s got talent! Maybe the guy they hired to put this in order quit, but next up is “Daddy’s Little Baby,” all the way from Ja’s first album. Self and Irv Gotti provide a nice backdrop for Ja to talk to his daughter from the heart. It all sounds very sincere and honest. Nice work, Ja.

Continuing with the We Don’t Need No Order vibe, here comes “Love Me Hate Me,” from the album “Rule 3:36.” The beat and flow are certainly sufficient, but the lyrics are dumb, and I have to argue with Ja’s primary formulation. Many people neither love nor hate him. For me at least, it’s more this confusing mixture of guilt, fear, pleasure, and utter horror at the sheer spectacle of it all. Hey, and where the fuck is “I’m Real”? I love that song.

The last track is another newbie, called “Exodus (Outro).” It’s pretty good, despite the bitching about how nobody understands what it’s like to be a superstar. Even when Eminem does that it tires me, and this is no “The Way I Am.” It ends with Ja assuring us he didn’t launder any money, and you know what? I never thought he did, because he wasn’t a defendant in that trial. Alright, this review is done. I’m still pissed they didn’t include “I’m Real.”