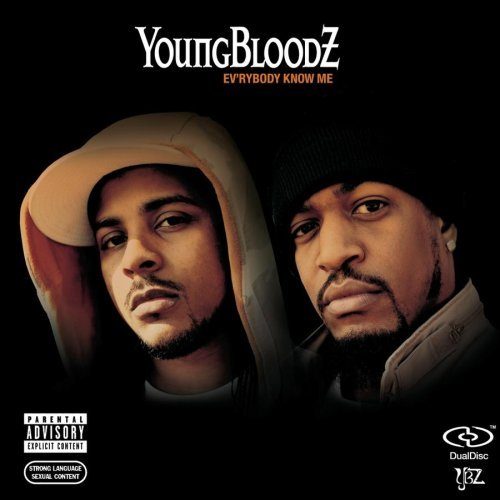 Coming off of the crossover success of “Drankin’ Partnaz” the YoungBloodz are back with much the same formula in 2005. Far from the smooth grooves of “85 South” and the crunk-bounce of “U-way,” “Ev’rybody Know Me” is a generic take on the popular Atlanta sound. While the YoungBloodz first burst onto the scene riding what was then a new wave of Atlanta rappers, their latest album finds them following trends instead of setting them.

The album’s intro asserts that the crew is “on a level you might can’t fuck with,” but the rest of the album fails to deliver on that promise. “Chop Chop” is a decent cut featuring Scott Storch flipping a horn sample decently enough. The lead single follows as the Bloodz and Lil’ Jon hook up once again for “Presidential.” The track attempts to capture the same energy of “Damn” but fails miserably. Lil’ Jon’s boring synth arrangement and generic drum pattern fail to match the Youngbloodz somewhat original approach to flossing. One of the album’s only stand out cuts follows with “Datz Me,” a collabo with Young Buck. Though the production could be better, the James Bond sample is enough for a semi-hot southern anthem. Lil Scrappy drops by on “Excuse Me Shawty,” and surprisingly Jamil Debardlabon’s take on ATL crunk sounds more like “Damn” than Lil Jon’s own contribution to the album. Debardlabon shows up again providing another decent beat for the album’s title cut, where the Youngbloodz once again drop generic verses but make up for it with energy and style.

Super-producer Mannie Fresh drops by for “What Tha Biz.” The track was previously billed as “Brand New” on the mixtape circuit, but a change in hook accounts for the different title. Though the combination of Mannie Fresh with anyone usually equals a hit this particular song embodies everything that is wrong with this album and the Youngbloodz. While the Bloodz bring plenty of style and energy to every song they’re on, their lyrics are generic at best and can’t survive without an equally energetic beat and catchy hook. Sean Paul’s opening verse on “What Tha Biz” proves the point:

“My black Benz (Benz) is on dubs (on dubs)
Sitting out in front of the club
Me and my thugs (my thugs) and my bitch (my bitch)
We smoke purp, buying bottles cause we rich
Yeah! I say that I (say that I) I’m on deck (on deck)
I got blow, got dro and got X (got X)
That’s me (that’s me) Sean P (Sean P)
My life, smoke weed, get chiefed (get chiefed)
I’m showing out (showing out) spending stacks (spending stacks)
Hoodrich bitch how ya love that? (love that)
Double stacks (double stacks) single stacks (single stacks)
One line, two line, powder packs (powder packs)
VIP (VIP) I’m in the back (I’m in in the back)
And you ain’t gotta ask a nigga where them dollars at (dollars at)
I break bread (break bread) money on the floor (on the floor)
A million dollar nigga, clothes newer buy the store ho!”

When taken by themselves these lyrics are unimpressive. Paul’s energy and style almost make up for this but Mannie Fresh’s unoriginal beat and simplistic hook aren’t enough to take the focus off the lyrics. “Haterproof” shows what a decent beat and smooth hook can do for the group as the song sounds like a potential hit with its half sung/half chanted hook. “Some Change” quickly finds the group reverting to its old ways as they attempt a strip club anthem over production that sounds like an attempt to copy David Banner’s style. “It’s Good” finds Mr. Collipark providing the production, only this time around one begins to wonder just how many ways someone can arrange tom-like drums and handclaps without repeating oneself. With that said, the track could be a hit as Collipark accents the drum track with enough melody to make it catchy and T-Boz’s hook does have some appeal. Another currently hot producer assists on “Play UR Position” as Jazze Pha comes through with another smooth beat/hook combination. The track lives up to Pha’s usual output and therefore makes a decent take on the generic ladies track.

“Sum’n Like A Pimp” finds the Youngbloodz putting together what could be another underground anthem as the tracks deep bass and high-pitched synth lines fit the mold for most southern street anthems. The subject matter once again dwells in the repetitive and generic, but the group’s style and energy saves them again. The album’s next cut is probably one of the best and most unlikely cuts from the Youngbloodz. Daz Dillinger shows up for both the production and a verse on “Diamond Rings.” Providing a beat that is head and shoulders above anything from his own “Gangsta Crunk” album, Daz shows that the west and south can mix with good results. The track’s smooth crooning on the hook adds to the song’s G-Funk crunk appeal. The album official ends with “Grown Man,” a song that is almost dope. The Youngbloodz actually go in a new direction dedicating a song to their car’s engine. Those in the know appreciate the power and performance of a good engine and the bling it takes to get one. Unfortunately the track’s hook suffers from horrendous “woof” sounds that take away from the overall appeal. Incidentally the track features rapper Shawty Putt doing what sounds to be his best Pastor Troy impression both on the hook and in his verse. As a bonus cut, the “Presidential (Remix)” is served up with Akon remixing the track. No worse than the original, the Akon remix does take some energy away from a track that already lacked enough leading to mixed results.

Were it not for J-Bo and Sean Paul’s distinctive voices and style this album would fall flat on its face. “Ev’rybody Know Me” attempts to reach the same audience that A-town stomped to the rowdy “Damn” in 2003-2004, but fails due to generic production and song concepts. Tracks like “Datz Me,” “Haterproof,” and “Diamond Ring” show that over the right production and with the right hook the Youngbloodz can be an enjoyable listen. But when the production lacks, the Bloodz’s Atlanta flavor isn’t enough to carry an album. Fans, both old and new, will find some tracks that will please, but overall the Youngbloodz need to freshen up their sound, song concepts, and hook-writing skills for the next go round.