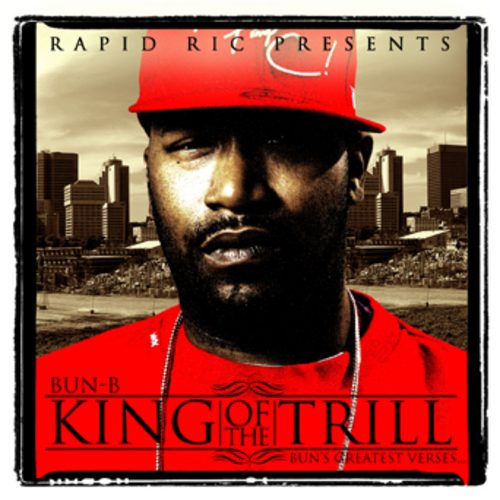 It’s hard to gauge just how official “King of the Trill” is. I know for sure it is a mixtape released by Bun-B in conjunction with Austin DJ Rapid Ric. I also know it is the second in Rapid Ric’s “Greatest Verses” series with the first installment featuring the underrated Z-Ro. While I know plenty about the release itself, the specific copy I happen to have is what presents problems. It features a cover different from the original Rapid Ric CD, doesn’t have Rapid Ric’s name anywhere on the packaging, and is sold in a different case and in retail stores as opposed to your local mixtape stand. Even with Bun-B’s official site printed on the inside cover, this specific release is suspect at best. Possible bootlegging issues aside, “King of the Trill” is a decent mixtape and a proper complementary release in light of Bun-B’s debut solo album which came out last year.

The theme of this mixtape is collecting Bun-B’s greatest verses and presenting them over popular or classic beats. It’s more of a blends CD than anything else, therefore its appeal is automatically limited to those who don’t mind verses getting replaced with other beats. As a DJ, I appreciate the technical aspects of blend CDs and cop the occasional one, but overall I am well aware that rarely is a blend anywhere near as good as the original. This release is no different as hearing many of the tracks makes you want to hear the original song rather than the remixed version. Such is the case on tracks like “Sippin’ on Some Syrup” where even with an equally hot instrumental (3-6’s own “Stay High”) the track still lacks the addictive appeal the original had. “Front, Back, Side to Side” suffers the same fate as none of today’ southern-crunk beats hold a candle to the original’s smooth and funky grooves. To Rapid Ric’s credit, the mix does maintain a consistent southern feel, taking most of the current hot beats and even mixing some older but equally energetic beats in.

Outside of the beat selection, the other quarrel fans might have with this mixtape is its claim of being Bun-B’s “Greatest Verses.” To be frank, this mix is nowhere near a collection of Bun-B’s greatest verses. In order to make that claim the CD would have to be filled mostly with verses from UGK albums and a lot less verses from Bun-B guest appearances. Granted, Bun-B does tend to steal the show on almost every track he’s featured, but a lot of the verses included here are taken from obscure albums and artists and do not reflect Bun-B at his best. Not all is bad, as many of the lesser known verses and songs they were taken from are worth noting. Of those, the highlights are ESG’s “In My Cadillac” and “We Big Mane” â€“ a track that found most of its spins on BET’s late night video show “Uncut.” “Greatest Verses” is a misnomer for this mix as a whole, but the mix does include what many could consider Bun-B’s greatest verse on “One Day:”

Not only does the mix include this verse but it includes the whole song from UGK’s classic album “Ridin’ Dirty.” Unluckily the song itself gets butchered thanks to a remix from Chops. Chops’ production overall tends to be average at best, but when remixing tracks his music sounds even more simplistic compared to the original.

For a mixtape, “King of the Trill” isn’t bad especially if you can cop it at the usual mixtape price. Rapid Ric is skilled at the art of mixing and blending and puts more work in his mixtapes than most DJs out today. With that said, if you want a true collection of Bun-B’s best verses you’d be better off investing in previous UGK albums, but if you want a decent mix to complement Bun-B’s solo album then “King of the Trill” will fill your needs.