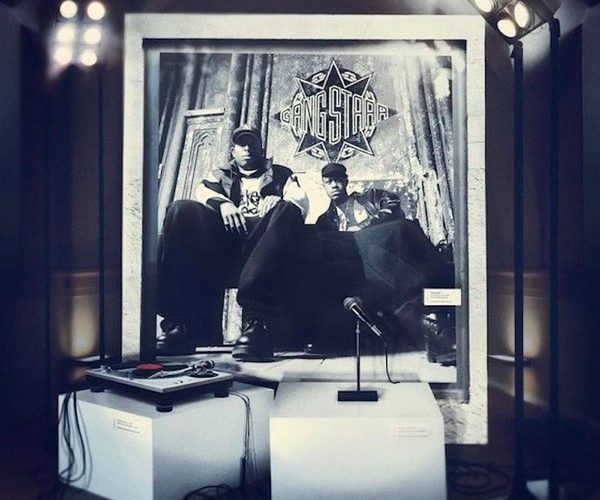 One of the Best Yet

Gang Starr :: One of the Best Yet

When I hear the phrase “one of the best yet” I immediately flash back to two of my all time favorite Gang Starr tracks — “You Know My Steez” and “Full Clip”. The former provided the Guru line that DJ Premier scratched into the hook of the latter, but the latter track opens with Primo emphatically stating “Big L, rest in peace!” The song from the album of the same name was released a few months after Big L was gunned down in Harlem. This was the same year I went to NYC for the first (and so far only) time in my life, so the mental connection between all of these things is forged in steel. Listening to Gang Starr’s new double album celebrating a decade of their musical and lyrical excellence made me feel like Lamont Coleman’s ghost was haunting me as I trooped the streets with my Timberland boots and backpack full of CDs and batteries.

It’s eerie now that 20 years after Big L’s passing, I’m sitting here reviewing “One of the Best Yet” and thinking about Guru’s passing at the same time. A decade ago I wrote a review where I stated “It’s unfortunate that … he and Premier no longer work together” and just a year later Keith Elam passed away at only 48 years old. Big L had the potential to be one of the new greatest rappers in the game but was gunned down young in his prime. Guru was at least well enshrined as one of the greats, but the sudden and rapid onset of his illness was still as shocking as if he had been slain in the streets by a jealous rival or in a stick up gone bad. “Stick up kids are out to tax” you know? So many of my fondest hip-hop memories are like that — Gang Starr songs with words by Guru, music and hooks by Premier. His death seemed to put a nail in the coffin of ever hearing Gang Starr again.

A decade later that nail has been pried up. I couldn’t have imagined the scenario that led up to it happening, but to make a long story short Elam’s family gained control over his recording masters even the previous owner appealed the court decision. Rather than waiting for years of appeals to be settled that would leave Guru’s vocals in limbo forever, Primo’s lawyer negotiated a sale that would release enough material to record a posthumous album with. “One of the Best Yet” was subsequently pieced together over the next two years, carefully piecing the unreleased lyrics together with the right Primo beats and guest stars to make it all shine. I think it’s fair to say “The Militia Pt. 4” is an example of what I mean and legitimately the last time we’ll hear Guru with Big Shug & Freddie Foxxx.

Even though a new album with the Gang Starr imprint in 2019 was a pleasant surprise, my feelings about a posthumous album from one of my all-time favorites caused me to waver in writing this review. I had to start the review on a personal note because Guru’s legacy IS so personal to me. As Adam Bernard said in his Guru interview, “Some would consider it unusual for one half of a legendary duo to start working with someone new”. I certainly did at the time. I respected Keith Elam’s artistic choice to not be tied to one producer and one sound for his whole career, and his Jazzmatazz series of albums was as much a reflection of that desire as was his partnership with Solar before his passing. The irony is that Jazzmatazz worked so well BECAUSE Primo had made jazz samples sound so good with Guru’s self-described “wild monotone style”. Solar simply couldn’t capture the magic Elam did working with jazz legends, or that Primo did working with Guru in a contentious but musically fruitful partnership.

How does one judge a posthumous album like “One of the Best Yet” knowing it may be the best possible tribute to Guru, while quite possibly going against what he may have wanted if he were around to have any say in it? The conflict between the two is as inseparable as my feelings are about my love of an emcee whose smooth delivery and witty lyricism was part of my life since the early 1990’s. Before there was internet in every home, before a site named Amazon even existed, there were mail order catalogues like Upstairs Records. When I wanted more Gang Starr than I could get in stores locally, dropping a check in the mail and waiting for a package to arrive with “No More Mr. Nice Guy” tucked inside was my only option.

That album brings us full circle to the issue at hand. Guru was famously a cat from Boston looking to make his name in NY, while Primo was a 5th Ward Houston dude with the same hip-hop dreams in the Big Apple. (Just imagine if DJ Premier had been part of the Geto Boys — but I digress.) The two crossing paths led to several of the best tracks on “No More Mr. Nice Guy” and an immediate partnership that resulted in the decade of rap classics ultimately heard on “Full Clip“. Whatever Keith Elam’s feelings about his on-again, off-again tandem with Premier were, that double album was its own admission that “Primo knows best” when it comes to getting the most out of Guru’s unique vocal delivery. Listening to “So Many Rappers” even Elam would have to admit this song is the shit if he were here today.

“So many rappers have come and gone
I guess this rap game, has really done them wrong
So many rappers tryin to get their name out
Many got caught up,for just havin their chain out
So many rappers couldn’t handle showbiz
While I’m steady rockin so you know what it is
So many rappers made this their dream
Then quickly, most have disappeared from the scene”

Guru’s ruminations on flash-in-the-pan rappers and career longevity put that eerie feeling in the air again. The song’s echoing final words are “Most will be lucky if we remember their names”, but they’re said with the unironic knowledge he’ll never have that problem. His distinctive Boston to NY delivery was much debated during his lifetime, to the point he even recorded a song with Primo called “Mostly Tha Voice” addressing fans and critics alike. It’s a blessing to hear that voice again on “One of the Best Yet” on tracks like “Hit Man” featuring Q-Tip and “Lights Out” featuring M.O.P. The way this album came together may have been unnatural, but you can’t tell it from the way it sounds. That’s a tribute to both Primo’s production skill AND his genuine desire to shine his late friend’s legacy the right way.

Criticisms of this album are minor at best, but in Guru’s lifetime I wasn’t shy about taking note of things that did or didn’t work, despite the fact I was and still am a huge fan OF his work. In fairness the criticism here is entirely beyond his control because as noted he had no input in how the album was put together; nevertheless, it’s immediately deceptive to look at 16 tracks on “One of the Best Yet” and think there are 16 new Gang Starr songs. An intro and three interludes take up 25% of that total, so now we’re down to 12. I want to like “Bring It Back Here” but at only 50 seconds long it’s over before it even got started, and the symphonic strings are a rare example of Primo trying too hard to make Guru sound good. Whatever posthumous lyrical snippet he had to work with here just wasn’t enough. Either way that leaves 11 songs, and you can’t help but notice cameos on eight of them. Was there really enough material in the asset purchase to work with? If you look too closely it almost feels like a magician’s sleight of hand, but it’s so good on songs like “From a Distance” featuring Jeru the Damaja you buy the illusion.

“Government name Keith Elam, put in work per diem” vows Guru on the track, as Primo scratches in his line “came to give you exactly what you asked for here”. They did — and I didn’t even know I was asking for it. It’s a personal review, but it’s a personal album, and if you’re a long time Gang Starr fan like me it will be just as personal to you. There’s a timeless quality to the way Keith Elam and Christopher Martin brought out the best in each other, and even posthumously on “One of the Best Yet” you can still hear that love of making hip-hop in every track. Primo said he cried in the studio while mixing these songs and it’s not hard to see why. Big L rest in peace, Guru rest in peace, and to all those who hip-hop has lost in the last 35+ years of my life since I got my first rap tape, rest in peace.