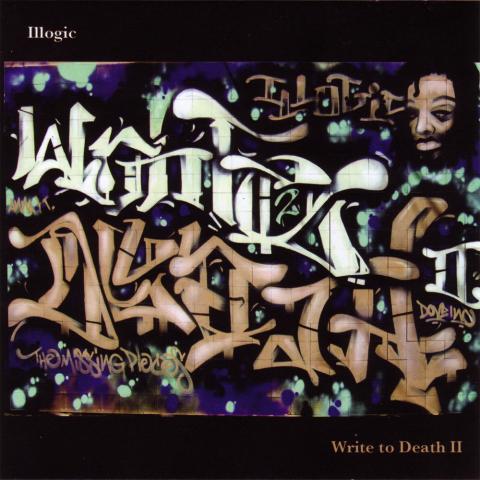 Illogic has been a mainstay on the underground circuit during the last few years, crafting albums many people have referred to as classic. Though I personally haven’t had the chance to peep him, his track record is impressive and his current label, Dove Ink Records, boasts an equally impressive roster of artists. “Write to Death II” isn’t a new album in the conventional sense, instead it is a collection of unreleased and obscure tracks that Illogic has created over the years. “Write to Death II” is an interesting album but one that probably should be passed over unless you’re a hardcore fan. Since the album is a collection I assume it isn’t as good as some of his more cohesive efforts, and though the variety can be good at times, the album’s eclectic nature ultimately leads to mixed results.

From the jump, it’s apparent that either Illogic tends to choose beats that clash with his style or that the mastering on the album was a bit off. In my opinion it is a combination of both factors that leads to the songs sounding like a fight between Illogic and the beat at times. On “Stay Sleep” the bass line almost drowns out Illogic when it kicks in. “Time Is Coming” has a dope beat but so much seems to be going on in the beat itself that you seem torn between listening to the beat or to Illogic’s verse. Of course the problem isn’t all with the beats as on some songs, such as “Time Is Coming,” Illogic’s delivery is too strong to begin with, approaching the level of a yell at times. The beat’s loudness might just be a response to Illogic’s loud vocal levels.

Outside of the problems with the mastering of the album, “Write to Death II” is a decent effort with an almost equal number of high and low points. As an emcee, Illogic can be too abstract at times making it difficult for the listener to comprehend exactly what he’s trying to convey with his rhymes. When Illogic sticks to more straight-forward lyrics he meets success. Highlights include “Capsized,” a tale of love gone wrong that includes a mellow string and guitar driven beat by Overflow. “An Ocean” sounds like a dope track except for the fact that I at least couldn’t quite understand Illogic’s message behind his abstract lyrics. The track’s beautiful flowing beat is a great contribution thanks to producer Blockhead. The only outright horrible track would have to be “Liquid Meets Land.” While the simple beat isn’t bad at all, Andrew Bagadounts’ horrible and cheesy delivery detracts from any of the positive message and knowledge his lyrics attempted to deliver.

“Write to Death II” is a strange mix of tracks that I can only imagine would only be appreciated fully by those who already call themselves fans of Illogic. It isn’t a bad CD at all, and most of the tracks on their own are at the very least decent. But due to the fact that the tracks are a collection with no direction and that Illogic likes to venture into the abstract at times, the project lacks any underlying theme. This wouldn’t be a bad thing if each song could stand on its own and wasn’t all that deep, but with an artist like Illogic it seems you’d be better off digesting a cohesive album if you were trying to get an idea of what he is all about. On their own many of the beats are dope and different. On his own, Illogic is a capable emcee with a decent flow and seemingly deep lyrics. As they are combined on this package, the beats and lyrics provide some good moments but other times leave the listener confused.