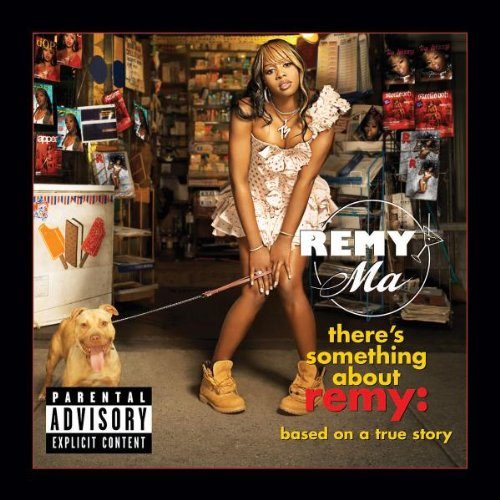 Remy Ma :: There’s Something About Remy

If you’re a fan of French cognac, you’re already familiar with RÃ©my Martin. For those who don’t imbibe spirits, suffice it to say it’s considered top shelf brandy, comparable to other well known hip-hop favorites like Hennessy and Courvoisier. The high price these brands command belies the fact that they are all essentially distilled wines that are about 50% ethyl alcohol by volume. Personally though if you offer me a $10 glass of some RÃ©my Martin XO Excellence I’m likely to decline and ask for a Dos Equis or Michelob Amber Bock instead. Either my taste buds aren’t that cultured or a 12-pack for the same amount of money seems like a much better investment.

In the rap world Remy Martin has been bubbling up beneath the surface for a while now. The late great Big Pun had tapped her as a protege and even gave her a track on 2000’s “Yeeeah Baby” simply titled “Ms. Martin.” Pun died two months before the album was released, and in some ways he’s better off not seeing what came next. His beloved clique of Terror Squad MC’s tore themselves apart over the years to come – some siding with Fat Joe, some claiming their careers were being held down by him. Martin’s career was essentially derailed by the in-fighting and it’s taken her five years to get back on track. She made a name for herself where and when she could – M.O.P.’s “Ante Up” remix, Fat Joe’s “We Thuggin'” remix, and so on. When TS finally reformed in 2004 to release “True Story” she got her biggest push to date with featured vocals on both “Yeah, Yeah, Yeah” and “Lean Back.” Remy seemed ready to step out into the spotlight on her own.

Curiously it would be another 18 months until the release of “There’s Something About Remy.” In the interim she shortened her name to Remy Ma (possibly to avoid a trademark lawsuit) and kept hustling to keep her name in the spotlight, even picking up a “Best Female Hip-Hop Artist” at the 2005 BET Awards on June 28th. That success has led to a series of hot singles being picked up through the rest of the year, including the “Whuteva” track that was picked up for the “XXL Raps Volume 1” compilation. The Swizz Beatz track isn’t one of his best, but Ma’s personality was what propelled it to success:

“Yeah – see Rem is a monster
I’m rap’s M.V.P., the star on the roster
Officially a Boogie Down Bronxter
Terror Squad ain’t the Brady Bunch and I ain’t Marcia
My shit’s so butter they should call me margerine
And I ain’t gotta be boss as long as I’m in charge
And whatever I say goes, so if I say no
Don’t ask why I assume it’s because I say so
I’ve been doin it too long, ain’t nuttin new to me
I’ll run through your lil’ gated community
You know how the girl be, I’ma show stopper
I’ll give it to you early before the toast pops up”

That track makes the cut on her full-length album, along with the official single “Conceited.” Produced by Scott Storch, “Conceited” is an intriguing mixture of Middle Eastern influences and Miri Ben-Ari style violin samples. On the whole it compares favorably to his 50 Cent track “Just a Lil’ Bit.” Since Ma is trying to usurp today’s top female MC’s for the role of hip-hop’s sexiest gangsta bitch, the sound and lyrics within are both highly intentional:

After spending over half a decade waiting to finally arrive, the title “There’s Something About Remy” comes off as unintentionally ironic. Ma and her label are clearly trying to trade off the fame of the movie, right down to having Ma pose like Cameron Diaz did on the DVD cover (Remy is even holding a dog on a leash), but that just illustrates the problem all too clearly. Big Pun can be heard on the album warning that Ma will “blow your balls off,” and he even does a fly posthumous duet with Ma called “Thug Love” that is one of Alchemist’s smoothest tracks to date, but one can’t help but wonder if Pun wouldn’t wonder what happened to Ma in the last six years. Instead of developing into a truly unique rap gangstress, there’s often nothing about Remy that makes her distinctive. The all-star selection of rap producers makes the problem worse, as they create a sound for her instead of Ma creating her own. Ma “spits harder than most dudes” on David Banner’s “I’m,” but just ends up sounding like Foxy Brown. The Che Harris laced “What’s Going On” featuring Keyshia Cole finds Ma playing the Queen Pen role. The most obvious comparison though comes on Buckwild’s “She’s Gone,” where Ma brags that “there ain’t a bitch as ill as me/no bitch as real as me” and goes on to discuss the virtues of being pleasured orally. Lil’ Kim anyone?

There’s nothing intentionally whack about Remy Ma’s full-length debut. “There’s Something About Remy” has plenty of hot tracks like Scram Jones’ up-tempo “Lights, Camera, Action” and the surefire single “Tight,” a duet with Fat Joe over a Cool & Dre beat. Ma’s biggest problem is that the strong personality she first showed on “Ms. Martin” seems to have been subdued over the years, as though the TS clique convinecd her the best way to finally put an album in stores was to get in where she fit in. Hip-Hop in general needs more diversity of sound and style, and female MC’s in particular have been coming off like clones of Foxy and Kim for a while now. Ma had the opportunity to break the mold and show everybody a new way to rock as a New York thugstress, but instead she sounds eager to step in and pull a crossover audience while the rest are sleeping or busy with legal problems, and unless Trina has something to say about it she just might. Slickly produced, competently executed but lacking in personality, “There’s Something About Remy” only proves that there really is something more about Ma than this album deigns to show us.