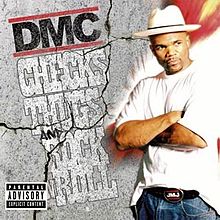 20 years ago on “Darryl and Joe,” Darryl McDaniels made the simple but memorable proclamation that “In the place to be, I will MC/the Master of the Ceremony cause it’s easy to D.” For the next decade everything did seem to come easy to D, the man who wore glasses so he could see, and got some of the best things in life for free. Money, booze, weed – anything Darryl could ever want or need. Being part of Run-D.M.C. meant a whirlwind of worldwide touring, performing, and living it up. The excess of success was both a gift and a curse, and by 1990 the group was nearly burnt out. Only two albums would be released in the group’s next 11 years – 1993’s spiritual rebirth of the group on “Down With the King” met with some success but 2001’s “Crown Royal” was widely panned by critics as a mistake. Besides being musically and lyrically lackluster, it was hard not to notice there wasn’t much of Darryl being Master of Ceremonies anywhere on the album – it suffered greatly as a result.

Little could any of us know that DMC was on a personal journey far harder than anyone could imagine – even D had no idea how deep it would get. Already fracturing from creative differences while on tour in 1997, things got even worse for the group when Darryl developed spasmodic dysphonia. To make a long story short and avoid tedious medical explanations, the symptoms caused D’s voice to change dramatically. The man who once loudly and boldly yelled “MY AHHHHHH-DIDAS” in a deep booming voice was suddenly more squeaky than the door of a haunted house. Not only did this make continuing to tour impossible, it drove Darryl into nearly suicidal depression. It’s hard to imagine having one of the most famous voices in all of hip-hop history only to wake up one day and hear something come out of your own mouth that’s not you, and it’s no wonder it nearly pushed him over the edge. Crediting Sarah McLachlan’s “Angel” as the song that inspired him to not give up, D continued to support the group despite not being able to contribute much vocally until Jam Master Jay’s senseless death in 2002 made continuing Run-D.M.C. more of a farce than it already was. Run and D officially called it quits after almost 20 years together.

Little known to the hip-hop world, Darryl McDaniels was already planning his comeback. His personal journey continued when he found out he was adopted, and VH-1 decided to profile his search for his birthmother with a reality series about his quest. This in turn turned out to be a good vehicle to promote DMC’s planned but often delayed solo project “Checks Thugs and Rock N Roll.” And at long last in 2006 the album has finally hit store shelves, nicely packged with a bonus DVD that includes interview footage and music videos for tracks such as “Just Like Me” featuring the aforementioned Sarah McLachlan as a guest vocalist. In fact McLachlan and the musical backdrop itself are both a modern revision of Harry Chapin’s classic folk song “Cat’s in the Cradle.” I’ve certainly heard worse ideas for a rap song.

“The child was born it was a beautiful day
It was 1964, the 31st of May
The girl gave birth to a baby boy
He’s not a burden, he’s a bundle of joy
She was just a young girl in her youth
And her parents tried real hard to hide the truth
Is there a chance for the baby to live?
That is a chance that you gotta give”

Six months ago Rev Run did the solo bit himself with “Distortion,” an album which itself seemed calculated to take advantage of the newfound exposure Run was getting from his reality TV series “Run’s House.” Nevertheless on a certain level the album worked for three reasons: (1.) Run’s over the top personality, (2.) Run still sounding (and for better or worse rapping) like he has since way back, and (3.) Everything was kept short and to the point. I feel a little guilty for what I’m about to say, since D has clearly been through more trauma in the last 9-10 years than I have in my entire life, not to mention I’ve idolized Run-D.M.C. since my childhood. Nevertheless my sympathy for and admiration for Darryl McDaniels shouldn’t get in the way of honest truth.

In evaluating the musical worth of this album you can’t say any of the same things of “Distortion” about “Checks Thugs and Rock N Roll.” Many of these songs have about two minutes worth of content but for reason get dragged out twice as long. DMC’s personality has vanished like the periods that used to initial his name – a cocksure attitude has been replaced by insecurity and self-doubt. Most damning of all, particularly because this is no fault of D himself, his voice has completely gone to shit thanks to his medical condition. “Watchtower” seems great on paper – vocals sung by Joshua Todd of Buckcherry, guitar played by Elliot Easton, and a the song itself is a reworking of a classic both Dylan and Hendrix had a hand in. Despite all that the minute D raps, it’s over.

If it were only the fact that Darryl no longer sounds like DMC, one could over time grow accustomed to it, although it would still be kind of hard to enjoy. The problem is that his rhymes were more complex and fluent back in 1986 than in 2006, and that’s not just the square glasses with rose colored tints talking. Don’t expect D to slay suckers that perpetrate or lay down laws from state to state. I’m sure the challenge of rapping with a physically different voice makes being a little simplistic somewhat necessary, but you can’t help but words of tracks like “Find My Way” dissapointing, and a guest appearance by Kid Rock is not enough to save the song from mediocrity.

“The life that I live isn’t make believe
You know who I am I wear it on my sleeve
Took a little trip down to Detroit
Whippin the whip down the strip like a A.J. Foyt
Makin hip-hop that’s been my job
I know a kid that rocks and his name is Bob
It’s a long race and I’m winnin son
Sippin on beers eatin veni-son
I can’t take back, the things I’ve done
I know I’m fuckin up but I’m havin fun”

I literally cringed when he rhymed “son” with “venison.” That’s not bad meaning good, that’s bad meaningAWFUL. There are a few tantalizing hints of the old Darryl lingering under this mess, and the times they break through save this album from permanent residence in the bargain bin. “Cadillac Cars” is a little bit more in the folksy “Whitey Ford Sings the Blues” vein than one would expect from D, but the music suits his new voice well and the lyrics are some of the best thought out to be found on the entire album.

“People don’t realize we’re really alike
But they like to see things in black and white
But they don’t know, we’re all the same
It’s all about your throw and how you play, the game
People think times won’t be so hard
If they just get down, and pray to God
But I came here, to keep it real
You gotta do a whole lot more than just kneel
Don’t hesitate to investigate
Take time out, to meditate
As long as I see things goin on
I’m gonna keep spreadin knowledge with a song”

Other songs that work for one reason or another include the Kanye West-esque production of “Cold” complete with guest vocals from Miss Jade and Sonny Black, the soul-searching battle with D’s demons on “Only God Knows,” and the reunion track “Com 2gether” where Rev Run and his old partner actually recapture a little of the old magic. “What’s Wrong” borders on being a little too Me Phi Me for my tastes, but guest vocals from Outlawz member Napolean give the track the edge it needs. I’d desperately love to give this album an overwhelming thumb’s up because it seems wrong to shit on a man whose pioneering work in Run-D.M.C. paved the road we all travel on today, not to mention a kick in the pants after all of his medical and emotional trauma. D had to know we’d notice how much his voice has changed though, and by releasing “Checks Thugs and Rock N Roll” he’s shined a big spotlight on it which isn’t flattering in any way. Personally I’m happy for D that he’s overcome his demons, found inner peace, and accepted the new man he is today. Professionally I’m forced to conclude that doesn’t make for a great album. “Checks Thugs and Rock N Roll” is often compelling, but for all the wrong reasons – it’s the trainwreck you can’t look away from no matter how hard you try. Most listeners will feel their $15 would have been better spent donating to spasmodic dysphonia research that would help others like D rather than listening to a painful album that just makes you yearn for what was and will never ever be again.