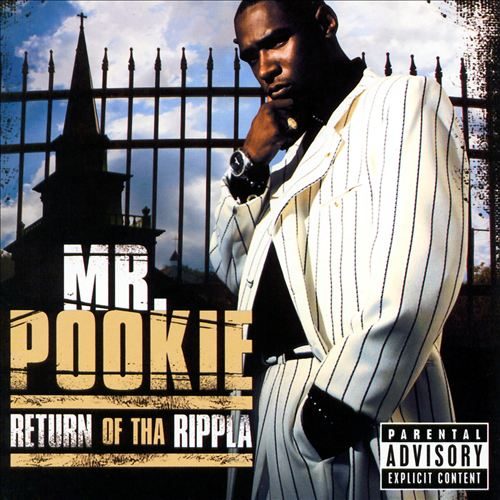 Mr. Pookie isn’t a household name despite being around for a few years and selling well over 100,000 units independently. As a local star confined to Texas’ Metroplex (Dallas and Fort Worth) Pookie saw success with his debut album “Tha Rippla” which was fueled by the catchy lead single “Crook 4 Life.” After going through label problems Pookie and labelmate Mr. Lucci started their own record company, Crawl 2 Ball Records, and have been releasing albums locally the last few years. “Return of Tha Rippla” is the first release under their recent distribution with Boss Entertainment which has a distribution deal with Universal Records. Despite having a golden opportunity to expand their fame and national exposure, Mr. Pookie and Mr. Lucci’s national label debut pales in comparison to their own earlier work and will likely disappoint even long time fans.

The album’s lead single was heard almost nowhere and with good reason as “Don’t Test Us” is a generic take on the “get buck” club song that lacks the energy of any Memphis or Atlanta banger. Pookie and Lucci come through with sub par lyrics in which they talk a lot of shit in an uncreative way. Sadly, this track sets the tone for the remainder of the album as Pookie’s official sophomore set lacks both musically and lyrically. The production is typical southern rap music, consisting of pounding bass heavy beats layered with various synths. It’s not bad production in the sense that all the producers are very capable and come through with decent tracks, but most of the beats on this album are average at best. A few beats do stand out as better as the rest and do deserve attention. Certified’s driving mix of horns and strings on “Texas Niggaz” is one of the album’s best cuts and definitely on the same level with what’s hot down south right now. Certified also puts together another tight beat on the laid back and soulful “Young Man,” which could use a better vocal sample but still manages to match the song’s emotional nature. “The Meaning of Crook” is an interesting selection due to its use of the Japanese National Anthem, whose eerie riffs are surely familiar to anyone. Despite a few gems, the production on “Return of Tha Rippla” pales compared to what you find on most commercial releases today and fails to give the album and original vibe.

Lyrically, Mr. Pookie has never been a great emcee, relying mostly on a rapid-fire flow and unique southern accent to maintain listeners’ attention. Such an approach on the mic works wonders with the proper production, but in this case the sub par beats make Pookie’s shortcomings on the mic even more apparent. Pookie’s cause isn’t helped by the fact his album addresses the most generic and repetitive issues found on rap albums today. When Pookie does get personal and original he comes through with commendable results, such as on “Young Man:”

“When I was younger I was humble, mostly stayed to myself
Nobody rarely paid attention so I concentrated on self, I concentrated on wealth
See it wasn’t a luxury for me, mama did what she could
but we were still the less unfortunate
Daddy was there through a course of it, when he left it was hell
Him and momma separated, but we were mostly separated by jail
And I was scared, other niggas shoulda known that my daddy’s no punk
So I understood when he took out the gauge and blew out the bitch nigga’s guts
Now we stuck, me and my momma, big brother, and my sister, we fell living hard
We fell even harder with no cushion, kept pushin
but I felt the need to show my daddy I still loved him
No matter who mama’s with I could never put another above him
And so in time we mostly spent time working on me
Nigga peep, like the song said I kept my ear to the street
Now my feets in it, my brother’s got me so deep in it
Ran with a few niggas but still need a long time for each instance”

Despite a few shining moments when Pookie’s message helps overcome his lyrical deficiencies, the album also ends up being average overall.

“Return of Tha Rippla” is an average album with only 2-3 tracks that are worth noting. None of the songs capture the energy of Pookie’s previous work and all of the songs pale to previous Pookie tracks on albums like “Tha Rippla” and “My Life.” The inclusion of a bonus CD with interviews and concert footage may be a big enough draw to get longtime fans to support him (as was the case here) but Pookie disappoints on his national debut.