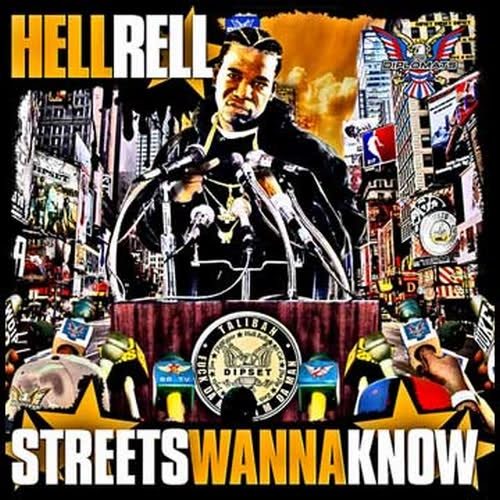 Good college athletic programs do not rebuild, they reload as the old saying goes. Like Duke or UNC the new wave of artists on DipSet are coming in to maintain the success of the regroup not restart it. Hell Rell looks like he will be the first to get his chance to shine with the varsity squad of Cam’ron, Jimmy, and Juelz, and his official mixtape “Streets Wanna Know,” shows that he is capable of keeping up with the swagger of the more famous trio.

If you want to hear thought provoking lyrics or laid back beats, look somewhere else, because this mixtape is strictly DipSet. The beats are hard and the lyrics are boastful with Hell Rell’s deep voice complimenting both. If you did not know Rell was recently released from prison and there are several mentions of his homecoming as well as his bid to keep listeners from forgetting. On “Well Known” Cam’ron delivers the hook, “And its well known that Rell home” with Rell providing the heat with lyrics like these:

“It ain’t nothing I dipped in the alley on em
Made a left dumped the shotty jumped in the Denali on em
Like Karate Kid wax off wax on
I’m too fly to put them state greens back on
And besides I’m tired of eatin’ all the jack
Tired of putting razors and drugs all by my ass crack
I don’t want to flash back nah, I’m past that
My shit is copywrited now nigga, ASCAP”

Listeners should find plenty of lines that are worth pressing rewind for, but there is very little diversity between the songs. Of course the beats are typical DipSet, heavy on the drums to keep the head nodding, so each track is worth a listen no matter how redundant the lyrics are. By relying solely on gangsta lyrics and punch lines, Rell limits himself. Sometimes his similes work like on “Shots Fired”, “Now my position is sort of like Malone / Call me The Mailman I bring the packages to your home”, but sometimes they are a little corny like on “On My Block”, “And these niggaz rapping about they gun, but I pop mine / Man I am in hood like mailboxes and stop signs”. Apparently Rell is not aware that there are plenty of stop signs outside of the hood. Overall he has more good lines than bad lines, but a little a variety would not hurt him.

Like most DipSet offerings there are plenty of posse cuts. J.R. writer comes through on four tracks including “Grand Finale” with 40 Cal as all three bring the swagger on the best beat of the mixtape. Rell may have the best line of the song with, “Chick swallowing my juniors / I ain’t gobbling her tuna”. Of the big three only Santana gives on any verses, but he appears on two tracks, “Shots Fired” and the braggadocios “Uh Uh” with Santana boasting at the beginning “You see Rell, the difference between us and them. We us and they them. And that’s that.”. Santana may have captured the appeal of the DipSet right there. Regardless of what people think the DipSet are going to keep their movement going. And with the new generation, led by Rell, ready to contribute the movement is just beginning.