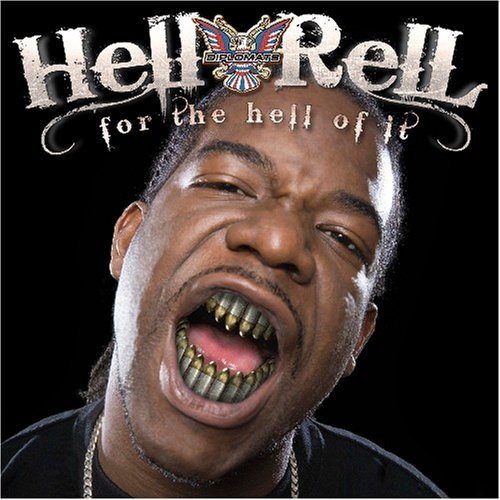 Hell Rell :: For the Hell of It

Hell Rell has been in the mixtape game for a while now, and has finally released his debut album, “For the Hell of It.” Rell’s style is infused with a few traditions, most notably the “New York hardcore” and “gangster” sounds, but ultimately it is his group â€“ The Diplomats â€“ which has most heavily influenced his sound. Cam’ron is the first credited executive producer, and it is quite evident: this album just has that Dipset feel. Whether that is a positive or a negative is up to the listener.

Fortunately for Hell Rell, he is a slightly better lyricist than most members of Dipset; unfortunately, “For the Hell of It” might not have that one banger that has the ability to propel him into the national spotlight. For real heads who like that hardcore New York sound, however, this may be good news, because there are very few songs that have been blatantly manufactured to get spins in the club or on the radio (see: Juelz Santana, “There It Go (The Whistle Song)”). This is not to say that such songs are completely absent â€“ “Show Off” is a weak crossover attempt â€“ but they tend to be consumed by the more biting tracks made for the streets.

The album starts out strong. In fact, make sure not to skip the intro, as it is a pretty good representation of what is to follow. On the first full length track, “Do It for the Hustlers,” Rell outlines his position clearly over arguably the best beat (by Knoxville) on the album:

“In the A, I heard they lean wit’ it rock wit’ it
Well on my block we machine wit’ it clock wit’ it
Come through your hood with the beam on top of it
Got five birds I’m trying to move every drop of it”

“Paperboy” follows boasting the most infectious hook on the album, that rare song that might be in your head when you wake up in the morning but even then won’t annoy you. Ablaze Da Architek mixes a surging bass line with a high-pitched string sample and a deep piano for Rell to spit over, and the collaboration works to perfection. Although Rell’s hardest-hitting jabs are serious raps about life in the ghetto, he proves he still has the ability to throw in a playful left hook:

“And this nigga get on the stand
And swear to God on ten bibles
Yea, he washed up
Fresh off ‘spin-cycle'”

Of course, there is the obligatory, recycled hustler talk, but if you can find one Dipset LP that doesn’t mention coke-pushing, let me know (seriously, shoot me an email, I’d love to hear it). However, refreshingly absent is the misogynism that pervades other Dipset albums (“Suck It or Not,” anyone?). On the contrary, Hell Rell shows his softer side on songs such as “Deep in Love,” where he talks about his love for daughters and his boys (okay, okay, and also for his money), and “Life in the Ghetto,” a tortured meditation on life in the streets.

Other highlights are “Streets Gonna Love Me” and “I’m the Shit” featuring Cam’ron, on which Rell shows he can rap with Dipset’s elite. In fact, despite some high-profile guest appearances â€“ Styles P, Young Dro, Juelz Santana, and to a lesser degree, JR Writer â€“ Hell Rell refuses to be outshone. Surprisingly, the best joints are the ones he does solo, a promising augury for a career that has just begun to take off.