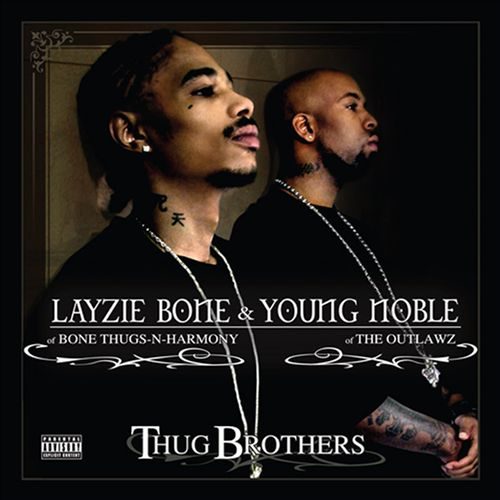 Layzie Bone & Young Noble have a lot in more in common than is at first apparent. Both are members of groups that are more famed collectively than either are as soloists – Bone Thugs-N-Harmony and the Outlawz respectively. Both have released solo albums which are popular among their clique’s following but which haven’t achieved wider success. Both are in the shadow of a legendary rap figure who passed before his time – Layzie is to Eric Wright as Noble is to Tupac Shakur. Beyond that the similarities end – Noble has shuttled back and forth between New Jersey and California, while Layzie is a born and bred Cleveland resident. Bone’s members have always been known for their smooth harmonious raps, while the Outlawz members are responsible for some of the ruggedest thuggest rap in the game.

Noble: “Now we’re walkin down Easy Street
When me and Layzie connect, it’s like Makaveli and Eazy speak
A nigga knows, got a flow with a greasy streak
On the road, doin shows, fuckin easy freaks
Gotta know how to read the streets, gotta play it for keeps
Go for weeks with no sleep, Lord knows
Gotta eat or probably it’s just the hustle in me
Nigga the way’s to get paid and live comfortably”

Depending on your point Noble & Layzie working together is either a dream team or a mismatched nightmare. There’s actual chemistry to this union though, which makes songs like the above quoted “Young Soldier” an unexpected and pleasant surprise. Underrated producer Mike Mosley combines together futuristic drum beats, smooth guitar licks and an understated background melody into one tight West coast funk track. Noble opens the track with his rough and gritty vocal delivery, and Layzie balances him out lyrics that are just as real but still sound like a vocal counterpoint thanks to his higher pitched melodic flow:

“Real niggaz do real thangs
Nigga get ya money cause it ain’t no game
A lot of these niggaz wanna do shit strange
Down to sell they soul for a second of fame
Take it from a nigga that be grippin the cane
For the love of the money, nigga that’s the aim
Run into some shit that you can’t explain
Nigga out the door and nigga you to blame”

The duo continue to offer surprises on this 14-track album. “Man Up” starts out like a classic Bone Thugs track then evolves into an introspective dialogue where Noble reflects on the days when they “respected all the old heads” and ran “through the streets bumpin BDP, Kool G. and Public Enemy” before becoming a “public enemy” himself. By the time the two trade verses at the end you really feel like they are “Thug Brothers” from different mothers, bonded by the commonalities of hustling to survive both on the streets and in the rap game. It’s a theme that comes up again on tight tracks like K. West styled “Then You’re Gone” and the somber reflections of the opening cut “Put Me in a Cell”:

Noble: “Yo, I’m a angelic rider like Super Slick
We finna start the revolution in 2006
I was schooled by older cats like Geronimo Pratt
Taught you gotta kill a rat, retribution let’s get him back
Waitin on my forty acres and the blunt to blaze
From the slavery you gave me your racist ways
Pickin black cotton with a cotton mouth, the truth gotten out
Outlawz and Bone Thugs show you what this shit about”

Layzie: “Ahhh shit look what the wind blew in
Y’all better move cause I’m fin’ to get started
L-Burna from the land of the heartless
Strapped with a nine don’t make me spark it
Y’all probably done heard the news, if not then you need to check it
Bone Thugs-N-Harmony done broke away from Ruthless Records
We independent now, this shit ain’t funny now
This +Real Talk+ nigga, and I’m lovin the way it’s goin down”

Say word Layzie. It’s far too simple to write off “Thug Brothers” as a thinly veiled attempt to recapture past glory by putting underrated members of different groups together. Despite the outward appearance that these are artists with nothing better to do than looking to cash in on each other’s fame, nothing could be further from the truth. This 14 track album is both interesting and relevant, with a number of tracks you’ll be compelled to listen to multiple times. Highlights include the reflective ghetto narrative “What the Problem Is,” the energetic and upbeat “That’s the Shit” and the aptly titled track “The Legacy Continues.” If there’s any major criticism of “Thug Brothers” it’s that the production could have had a LITTLE more attitude. One or two really crunk tracks, and maybe a couple with a little more “Thuggish Ruggish Bone” swing would have really set this album off proper. Nevertheless this album is an early candidate for a 2006 sleeper. Even if you’re only a fan of one of these two artists give it a try – “Thug Brothers” is likely to give Bone Thugs fans new respect for the Outlawz and vice versa.