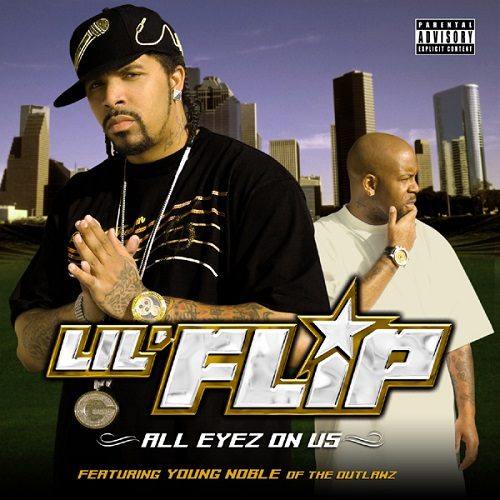 It’s not labelled as such on the spine or filed that way at the record store, but Lil’ Flip’s “All Eyez On Us” is actually an album by Lil’ Flip AND Young Noble. The only visual confirmation of this you’ll find is the front cover of the CD and the small print under the font for Flip’s big bling’d out name. This is not the first collaboration album for Noble – he has done releases with JT the Bigga Figga, stic. man and even Layzie Bone on the surprising 2006 release “Thug Brothers.” In fact Noble has more collabo’ albums with other artists than he does solo albums of his own. It’s not really clear why given Noble is one of the strongest members of the often overrated Outlawz. Nevertheless the whyfores are not as important as getting down to brass tacks with the opening track “Where You From.”

Not a habit I’d encourage frankly – drink codeine like that and you end up in an early grave like Screw did. How about Young Noble – dawg where you from?

Young Noble: “Yeah, this life of an Outlaw ain’t easy
I was – raised in Jersey, born in La-Leezy
That’s Los Skanless, homey I’m both-handed
Best of both coast-es, raised by the vultures
My momma was a hustler, then became a customer
I’m a young distributor, it’s like we never had enough
Get it have it and keep it, all in that order
Fill the Swisher with a quarter”

It doesn’t seem that Flip has drawn anything from Noble’s lyrical stylings or vice versa. They share a mutual topic of discussion and a beat provided by Big Hollis & Preach, but that’s about it. It’s hard to discern a good reason for this collaboration. One might say friendship but by their own admission in the opening song they’re from very different places and wouldn’t naturally have run into each other. One might say that it’s just Noble’s stee’ to rap with others since for some reason he doesn’t feel comfortable entirely on his own – apparently any co-star will do. The most likely explanation is that because both had a deal with Real Talk and/or Koch Records, label executives decided an in-house duet would move units. This brings us back around to square one though – if the collabo’ is good for both artists, why is only one of the two advertised and promoted on it? It would be easy to say it’s because Lil’ Flip is the more household name of the two, but after years of working with ‘Pac and being affiliated with his name even after his demise it’s not as though Young Noble is an unknown either.

On a side note given that this is my third review this week to bear an imprint affiliated with Koch Records there’s a trend developing. If these had been released separately – even a week or two apart – I might not have noticed that all but Layzie Bone feature an advertisement on the inside for “Playerade.” Apparently someone at Real Talk got paid big money to promote the latest entry into the sports/energy drink market, and their marquee flavor is “Purple Lean.” Seems hella exploitative to me. Another thing these releases have in common is that both Pastor Troy’s “Attitude Adjuster” and this CD are entirely produced by the same men – Vince V. on the solo and Big Hollis & Preach working as a duo. Apparently they are the Real Talk in-house producers. I can’t say they didn’t try to tailor the sound to the respective artists. Troy’s album was more rock’n’roll while the Flip & Noble album more closely matches Flip’s sound and Southern swang. “Can’t Let it Happen” and “I’m a G” would be at home on any Flip release, and “Speakin’ My Language” is as electronic a bounce as anything in his entire catalogue.

Although this album appears to have 14 songs in total appearances are a little deceiving. Four tracks are little more than skits or short interludes: “Flip Gates,” “Pure Uncut,” “Gettin Paper” and “Purple Lean.” With only ten songs in total this album is quite short, plagued by an unclear concept and seems like a contrived marriage as opposed to a natural union. Despite these problems the star power of both artists is a draw and songs like the crunk “Don’t Let it Happen” and the smoothed out radio friendly “Over Time” have trunk appeal. With more time to flesh out the concept of this collaboration the union of Lil’ Flip and Young Noble has potential, but this smells like a one shot deal instead of permanently uniting the Third Coast with other two. Procede with caution as “All Eyez On Us” is fine fare but feels fairly forced and ultimately unfulfilling.