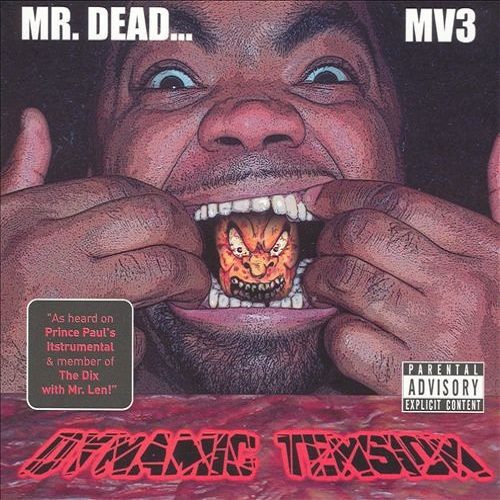 Every fan should have the album “De La Soul Is Dead” in his or her collection. Pos, Trugoy, Maseo, and Prince Paul created an album that was enjoyable with plenty of humor and skits. One of Prince Paul’s disciples, Mr. Dead, tries to bring the same humor and hip hop to his third album “Dynamic Tension” but is not as successful as De La was. Hailing from East New York, Dead displays some humorous lyrics and well crafted skits, but fails to bring any consistent lyrics on his latest release. The album starts out promising though, beginning with the dark “Rhyme and Punishment” as Dead brings the punchlines while angrily rapping:

Overlooking the Dipset-like rhyme scheme (“comes” with “comes”) there are some pretty good lines. However the album quickly takes a turn for the worse on the “Return of the Pimp Daddy Shrimp”. Sadly this one of the three songs that is mentioned on the press release. The song is meant to be humorous, but misses the mark badly like Jeff Foxworthy at Def Comedy Jam.

On “More Good Shit” Dead, inspired by Slick Rick, tells a story complete with high pitched voice changes. The song is so eerily reminiscent of The Beatnuts’ “Story 2000” (off of “Musical Massacre”), that Psycho Les and JuJu may want to ask for some royalties. On the Mr. Len produced title track, M Sayyid outshines Dead with his grittier flow and more clever word play. Unfortunately Dead attempts to match Sayyid and sounds a little….well you decide for yourself.

“I’m here bringing trouble
High as I ever been
Drinking and smoking again
Trouble when the sin begin
I be here to wreck shop
Brooklyn East NY non-stop
Sick when the pain begin
Because you amateur
Niggaz in the street maintain
I be the damager
I be professionalistic, rhyme exquisite
7:30 on your ass like Jehovah witness visits
Rhymes tougher than the Ultimate Fight
With head butts to the groin
I season your shit like sirloin
Then shake em and bake em”

The lyrics sound like they came out of a grab bag and Dead’s flow on the track does not help matters, possibly ruining the best guest appearance of the album. He partially redeems himself on the next track “Burial Ground” with the line “I run rugged down the ave. with heat like Vice City / All up in your crib nursing on your girl’s titty”. While his flow is better, most of the rhymes still sound a little too random. On the touching “Love One’s Self” Dead tells about the trials and tribulations growing up. He rhymes as follows:

“What’s for dinner? Hard times and ass whippings a plenty
Cashing cans just to scrape up pennies
My little brother rashed in the ass he need pampers
But there ain’t any (I got to get my brother some pampers)
I gots to do what I got to do no matter what
If it means robbing a nigga I got no choice”

After brief flashes of brilliance Dead reverts back to his elementary rhyming on “You Don’t Wanna” with lines like “Your style is insufficient like funds in your account / I will reach into your mind and decipher the amount / Leave clues so they track me down and never catch me / Leaning on the gates of hell so come and snatch me”. The beat for “Dope Fiend” is pretty addictive and Dead comes with hyped up lyrics that make it, arguably, the best track of the album. He also shows he can rap at a quick pace on the pseudo party-anthem “Standing Upright” and “That Sounds Personal”. At times Dead sounds like a talented emcee, but the lyrics are definitely not up to par.