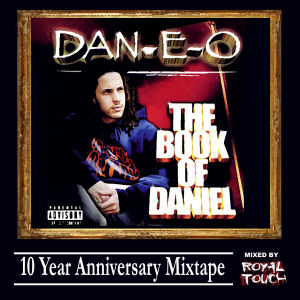 Thanksgiving Day in Canada was October 11th, but we at RapReviews are giving thanks to Canada for their contributions to hip-hop all month long. Who better then to recognize than venerable rapper Dan-e-o? He’s long been a stalwart of the Great North’s hip-hop scene, recognized both for his lyrical talent and his commitment to the fierce independence of Canadian artists. While many rap artists on either side of the U.S./Canada border look at traditional ways of getting into the rap game – record a demo, send it to labels, sign with a major and pray they’ll promote you – Dan makes his albums downloadable at low prices through since 2004 and his recent free “Dilla Pickles” tribute album was a smash hit for Dan and with the readers of the website. He’s the epitome of D-I-Y, succeeding on his own terms without needing a major to back him up.

Now after over 15 years in the rap game, Dan-e-o is taking a look back at his time as a hip-hop artist and at his debut full-length album “The Book of Daniel” with a brand new mix of tracks from that seminal release, put together by Royal Touch. This includes a never-before-released eight minute freestyle featuring Black Cat and Arcee recorded on “The Real Frequency” ten years ago, so even owners of the original album have something to look forward to. That being said let’s assume you have never heard the original or bought it from Dan-e-o’s website – what can you look forward to from this mixtape as it revisits a decade old album? Plenty. Good hip-hop music never goes out of style – some of rap’s best albums are now over 20 years old and still continue to sell and find new listeners every year. So let’s start with a track recently featured on Tha O Show – the funky (and appropriately) fat “Peanut Butter Danish” with Nish Raawks and Rishaard.

“Your whole damn block knows that fuckin with us is ridiculous
Props, continuous plots, conspicuous swaps, ubiquitous hot
You think you disrespect and can catch slight wreck?
You hyped and I’m the nigga that dissed your record in mic check
You type sweat profusely when you see my battle stances
It’s the fattest of chances your rap rants is badder than Dan’s is
I’ve HAD IT with pranksters posing”

The level of lyrical dexterity here is some straight up Pharoahe Monch and Talib Kweli type shit, making me wonder where and when Dan even had a chance to get his wind as he delivers this non-stop furious syllabolical assault. Speaking of Organized Konfusion, you may recognize a musical familiarity to “The Rough Side of Town” that’s very welcome mixed with samples of Biggie and Redman, and the only downside is that the song is only 1:12 long on this mixtape – but that’s just a good excuse to go and buy the full version. The tracks flow smoothly from one to the next with no pause and skip, Royal Touch deftly weaving these snippets together into one nearly 45 minute long jam session. “Perspectivez” is another of Dan’s intense non-stop flows that would put Twista to shame, throwing in some East Asian influences on the hook before bouncing into the apropo’ “Real Lyricists” featuring Charisma. He’s not the speed of Dan but he’s just as furious in another way – furiously vexed at whack emcees:

“Who the fuck you think you is yo, actin all buff?
Step in the Lyricist Lounge and watch you pussies get done
Ain’t no matchin us, underground competitive cats
Fuck your bullshit traps and your repetitive raps
My sentences cracks the cranium, sendin him facts
Every time he hear my voicebox rockin the wax
I paralyze punks, with powerful paragraphs”

Indeed – but there are a lot more drop examples of lyricism on this deep release. The tinkling notes and howling winds of “The Lion’z Den” are a perfect set-up for Dan to note “life ain’t +Perfect+ like +Strangers+,” ironic given he’d later go on to release a single under that group name featuring Drake. Is it any surprise that Dan ultimately vows “My Favourite M.C.” is “me?” Not to this listener, and I love the Phife Dawg sample backing it up. From the ridiculous Twista level fast “Margerine” to the equally rap aggressive “Revenge” to the mariachi sounds of “Corrida de Toros” there’s one thing clear about Dan now compared to Dan then – he’s mellowed out a little bit. That’s not a BAD thing! The Monolith crew Dan has been rolling with for the longest were obviously on some Freestyle Fellowship shit, pushing each other to see who could be the most insane or nimble rapper on the mic. As impressive as it is technically it’s actually better to hear Dan-e-o on his current albums and singles, because he takes the time to pace his flow and let each punchline and clever rhyme sink in – you really get the chance to feel what he says.

On the whole “The Book of Daniel (10 Year Mixtape)” is a fresh new way to hear the “Dear Hip Hop” era Dan-e-o at his finest, cut up and buttered up into snackalaz slices by Royal Touch. The presentation and the bonus track make it all worth the while, and one of the biggest selling points has to be that it’s only $5.99 CDN (and about the same in US dollars at the current exchange rate). For those who want to hear the original in all its glory though Maple Music offers a 2-in-1 combowhere you get both the original album as a full download and the mixtape version reviewed here for $11.99. That’s Dan-e-o, always hustling, still repping the Canadian hip-hop scene like no other. Show the brother some love.