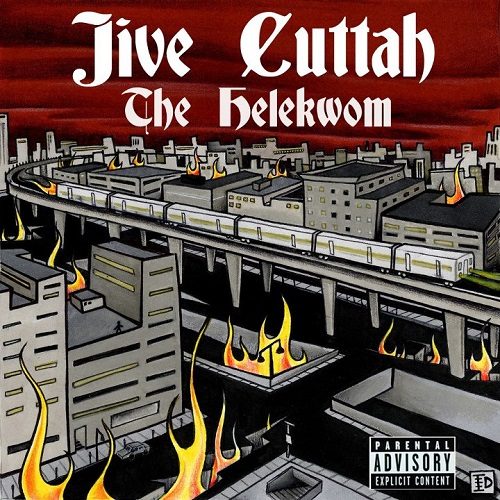 Jive Cuttah is dark. I don’t mean dark-skinned, I mean evil. He raps about blackness, corpses, blood, and other gothic favorites. It’s clear that he’s on some kind of mission to “break apart mental prisons” and somehow free minds that are held down byâ€¦I don’t know, religion? Materialism? It’s unclear.

As a matter of fact, this whole CD is a confusing, purposeless mess. Jive Cuttah offers his audience no reason to listen, unless your idea of enjoyment is hearing a man ramble about “scary” things. I don’t believe him when he says he’s capable of killing, and I certainly don’t believe him when he raps about blacking out and waking up with a dead family, seven deep and bloody. Further, even if these boasts aren’t to be believed, they don’t even succeed as imagistic patchwork.

Jive Cuttah is not as disgusting or visual as Necro, so he doesn’t approach the love-it-or-hate-it category: he just confuses. He seems like a dude that’s just lost, trying to pick his set, trying to find his voice.

The weird part is that he’s not a bad rapper, technically speaking. He’s got a handle on his breath control and raps with just a touch of a lisp (an asset to a rapper, and if you don’t know, ask G. Rap). He writes stuff that rhymes well and flows nicely, but the content is lacking, lacking, lacking.

The beats attempt a kind of mood-setting, some variety of eerie Halloween hip-hop, and at least the intent is clear. Holding back the beats is the fact that the drums on every track are hollow and boringly programmed. The samples are alright some of the time, but mostly Dr. Holmes and Rev. Al (Jives’ beatsmiths) are one-note guys. Mournful. Somber. Boring.

After honestly giving this album a chance, I have to say that Jive Cuttah is a depressed young man who should immediately stop rapping. I gave this album a few hours of my time, and now I’m never going to get that back. Damn.