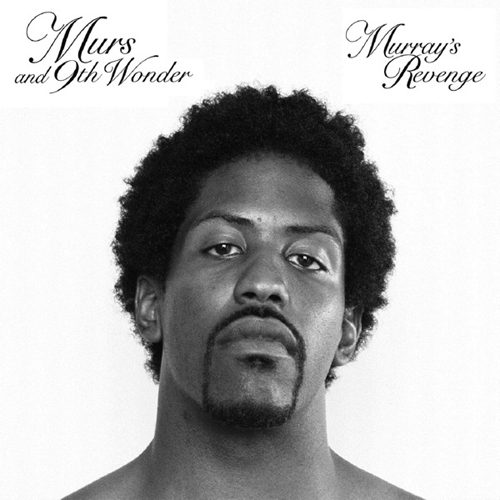 The recent underground fad of collaborations between a solo emcee and solo producer has been well documented. The underground circuit took the fully formed guest participation concept and flipped it, pushing it past single song contributions to full albums. Names like Madlib and Doom and Aceyalone and RJD2, put together, make anyone in the know foam at the mouth. Still, the margin of error is great, because if the respective styles don’t mesh in the studio, the results can be awkward. Sort of like EPMD being more than the sum of E+PMD, except the exact opposite. This powerful concept is also fleeting, because so far, very few of the couples have given it a second shot.

Murs and 9th Wonder are two of those few. On the heels of “3:16 â€“ The 9th Edition” comes “Murray’s Revenge,” the duo’s second ten-track affair of the last three years. In my opinion, they mixed reasonably well, overcoming a lack of quantity with some really nice material. The second go-round opens with “Murs Day,” a two-minute introduction for those who don’t know. As expected, 9th makes up for a deficiency in substantial drums with a stunning vocal loop that serves as a plate for Murs’ words:

“Questioning 9th about chopping vocal samples
I’ll chop you in your throat ’til you choke on the answer
Nice on this mic since I was broke and handsome
Until I get my respect I’m holding dough for ransom
From the west coast, everything I flow is an anthem
A&R’s that slept are now throwing a tantrum”

Though I have struggled with Murs sometimes in the past, his vocal delivery is crystal-clear and he absolutely commands attention. “Murray’s Law” is more of the same swagger, but 9th Wonder comes through beautifully. The beat is aided by bizarre but alluring synths that sound like digital wind flying through trees. 9th won’t abandon his signature, though, so he intermittently adds some powerful horns.

The refreshing “Barbershop” features 9th Wonder’s mate Big Pooh, and the two emcees overcome 9th’s predictable snares with some enjoying storytelling, highlighting the social aspect of the barbershop. Even with such an intriguing concept, however, they still find time to brag. This is unfortunate, and it almost ruins the effect of such an idea. Murs has spent enough time in the past convincing me of his alpha-male status in the rap world; “Barbershop” could have done without it. “Yesterday” fares better, as 9th vaults Murs into a personal rap through another vocal sample, which this time constitutes the title of the song. This is executed much better than something like Game’s “Dreams,” which proved just how difficult a technique it is. “Dreamchasers” is another excellent performance on Murs’ part. He chronicles his ambitions as a child, which turns out to be a fair representation of the average wayward urban youth. The hook describes it best, saying “we all chase money ’cause we scared to chase dreams.” I certainly agree.

9th Wonder struggles through the album. He never hooks it up poorly, but he also cannot create his own niche. This is fine, because Murs is mostly on point, but the only beat besides the first two songs that really grabbed me is his work on “L.A.” He enhances Murs’ ode to his hometown with a simple but gripping harmonica loop. Everything else either sounds too familiar coming from him, or is just adequately smooth, nothing else. He’s still a potentially great producer, as he shows in spots, but on “Murray’s Revenge” he’s just churning it out. The soul is still there, but the formula cannot be ignored. In most cases, he takes a vocal loop and a musical one, and staggers the musical loop intermittently throughout the song, dragging the vocal back for the hook. It’s too predictable. Additionally, his drums just can’t support such high-strung soul, as they plod along with no conviction, tapping when they should be thumping. “Murray’s Revenge (The End)” is the only song that sounds fully unique, so despite its merits it feels out of place.

Murs loves the ladies, as he has made clear on both of his last efforts. “Sillygirl,” featuring Joe Scudda, is luckily the only one that exploits his amorous side fully. “Love & Appreciate” does the same, but he directs his sentiments towards specific women, which marks a complete switch from his antics on such projects as “Felt 2.” This side of Murs is welcome, as it proves that he feels for women in more than a physical way. “Dark Skinned White Girls” explores the mindset of mixed-race females, and here he takes the perspective of these women. For Murs, a self-proclaimed player, this is a remarkable exhibition of compassion. He shows unexpected growth throughout the record without losing his lovable swagger.

9th Wonder’s problems could easily be chalked up to a decision to let Murs do his thing. After all, Murs is the headline act, and 9th’s problems arise from lack of ambition more than anything else. The samples he chooses are no longer memorable, and those samples have been his entire act as long as I can remember. Murs is better off staying away from bragging, as he manages to do for most of the album, because he is just not that good at it. Why talk shit poorly when you can tell stories all day and make them work?

As with the last one, length is an issue. “Murray’s Revenge” clocks in at a meager thirty-three minutes, which is simply too short for a full-length album. Considering the roll Murs is on, at least a couple more tracks would have filled it out sufficiently. Regardless, he is back, and better than ever. He’s become a wise street voice, confident and pleasant in each verse. 9th Wonder doesn’t do anything wrong, either, he just fails to meet expectations. For a rap album with “revenge” in the title, Murs’ agenda doesn’t contain much animosity. As any veteran emcee should, he is happy just shooting the shit, and it shows.