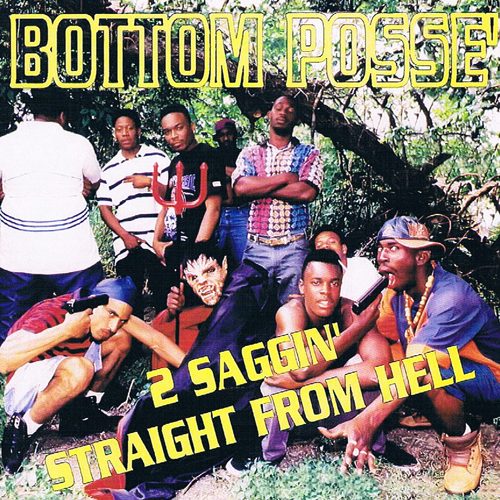 For all its prevalence in the music itself, it still wasn’t easy for rap to get the n word on the front page. Raekwon’s “Only Built 4 Cuban Linx Niggaz” was abbreviated to the long accepted but still somewhat perplexing “Only Built For Cuban Linx…” Nas backed out of the provocative “Nigger” and put up only faint resistance with the substitute “Untitled.” Ol’ Dirty Bastard made fun of himself with “N***a Please.” 2Pac intellectualized it with “Strictly 4 My N.I.G.G.A.Z.”

The progenitors of the word’s career in modern times, the Niggas With Attitude (speculative version propagated by Wikipedia: Niggaz Wit’ Attitudes), didn’t spell it out either, but their second album, technically titled “Niggaz4Life,” proved to be especially effective aesthetically with its mirrored lettering, particularly as displayed in capital letters in the album artwork (“EFIL4ZAGGIN”). The reverse spelling caught on, as seen in selected ’90s album titles like “Bone Hard Zaggin” (Big Mello), “No Ordinary Aggin” (PSK-13), “A Rough Z’aggin Bible (Pray At Will)” (BAM), “Zaggin Gon Be Zaggin” (918) or “Zaggin Die’N Everyday” (Joint Mob).

Baton Rouge’s Bottom Posse complicated the matter unnecessarily with “2 Saggin’ Straight From Hell,” which seems to convey that something is hanging lower than appropriate. (Clothing? Body parts? All the way down to… the depths of hell?) And if you are able to decipher the title, why is there a Wu-Tang-sized gang on the cover? To be fair, the collective aspect was much more present in those days. As Seattle’s Sir Mix-A-Lot once said, “Rollin’ with your posse is the only way to go,” and, for a not entirely far-fetched comparison, the infamous Insane Clown Posse also consisted of two lead vocalists, so the two rappers who take part in “2 Saggin’ Straight From Hell,” Joker P and Silky Slim, have every right to represent themselves and a perhaps more extended Bottom Posse at the same time.

Released in 1994, the album ostensibly hails from an earlier time. It’s not that most songs have the 1993 tag, the personnel is still, quite ineffectively, trying to emulate the pioneers of regional renegade rap, N.W.A, Geto Boys, Ganksta NIP, Nemesis, Esham, et al. “2 Saggin’ Straight From Hell” is an amateur application of early gangsta rap, relating the reality of the ghetto with shock tactics. They’re not entirely unsuccessful in establishing their point of view. Representing The Bottom, a historically African-American area today officially known as Old South Baton Rouge, they portray two sinners corrupted by their environment. “You ask me about my neighborhood? You ask me about this f–kin’ society? S–t man, I’m livin’ in hell every f–kin’ day,” offers Silky Slim, pondering further, “While livin’ in hell I have to do right so I can go to heaven. I don’t understand this s–t.”

If the above excerpts hint at a penchant for dreadful to demonic metaphors, horror imagery is indeed one of their stylistic devices. They picked up on others. “Get Em’ Up Saggin'” is their take on Nola bounce, with shout-outs extending all the way to New York and New Jersey (next to hometown spots like Scotlandville and Bankstown) as bits of “Trigger Man” fade in and out. “A Gangster’s Story” is more Houston than L.A., right down to the reference “I’m trigger-happy like the Geto Boys.” But more interesting than the storyline is how someone who operates the synths and siren effects tries to follow the story the way a score composer would. It’s completely inadequate, but at least they tried. And whereas the Nas/AZ duet of the same name has a distinctly peaceful vibe to it, the Bottom Posse’s “Life’s a Bitch” is radically pessimistic with Silky Slim delivering bleak statements to minimalist instrumentation. Meanwhile “Graveyard Shift” sees Joker P walk the impossible line between life-ender and party-starter. The funk-sampling track establishes “the Southside recording artist” as the technically stronger rapper of the duo.

Joker P, who appears to have been locked up during some of the recording process, is also the main author of “Angola Bound,” probably the album’s most notable song. A song with that name had been recorded just a few years prior by Aaron Neville. Although it would have lended itself perfectly, Bottom Posse decide not to sample the legendary New Orleans artist’s lament about facing time in Louisiana State Penitentiary but to spin their own cautionary tale about Angola. Over a creeping synth bassline, Joker recounts the career of a young man led astray by street life and gang life and while his partner in rhyme inserts twice, “I’m Angola bound, too,” it’s Joker P who takes deterrence to the extreme when he dwells extensively on the subject of prison rape.

Other depictions remain within the scope of the genre, although qualitatively continually hitting below average. They make the same mistakes as others, but they make them with much less style. Whatever potential there is, it’s buried under musical inaptitude. There’s a reason people like Seagram, Street Military, Cold World Hustlers or the previously mentioned are held in high esteem by rap connoisseurs. By the same token, the album’s target audience will find relatable stuff on the self-produced “2 Saggin’ Straight From Hell.”

Ice Cube vocals and Lafayette Afro Rock Band horns can’t ignite “Rattin’ M.F.’s,” but it’s undoubtedly a pioneering entry in rap’s “Stop Snitching” campaign, and it contains the equally early expression of southern pride “I’m straight out – that muthaf–kin’ south / Lettin’ you know what Baton Rouge is all about.” Sounding like an obscure 1988 recording, opener “I Feel Like Pulling the Trigger” nevertheless includes versant lines like “Fake studio gangsters / The Bottom Posse, boy, and you know we gonna gank ya” or “Them cops beatin’ us brothers up? / Huh, the Bottom Posse, brother, don’t play that stuff.” And for what it’s worth, they pick fights not only with local competition (The Much Fresh Crew, among others) but also a number of N.O. artists, including a female rapper who happened to go by Silky Slim as well. After intimidating offerings like “F–k What You Heard (Just Put Your Hands Up) #69” and “Rollin’ on Em'” (both featuring guest stars who have since passed) and more s–t-talking in “Shout Out To,” the CD bonus track “White Man’s Justice (Ode to Yoshi Hattori)” ends the album on a thoughtful note as Slim reflects on the fatal shooting of exchange student Yoshihiro Hattori in 1992 and the subsequent acquittal of the shooter. He notes, “Society in Baton Rouge is very, very messed up” and that the city “is really behind time,” adding, “It’s time for America to wake up also and realize that these useless and unworldly kilings will have to stop.” He goes as far as claiming that the Japanese was mistaken for a black man and that “if it was me that was killed, [the gunman] never would have been arrested in the first place.”

The Bottom Posse put out one more album in 1997 and Silky Slim and Joker P both released albums on their own. Apart from being a historic Baton Rouge rap outfit and acting as early predecessors of current heavy hitters like Boosie Badazz and Kevin Gates, it is perhaps that bonus track that predicts something like a Bottom Posse legacy, a connection between the real world and the one shown on “2 Saggin’ Straight From Hell.” In the city that last year witnessed the murder of three police officers following the contact shooting of CD merchant Alton Sterling, Arthur ‘Silky Slim’ Reed has long been a street activist with his organization Stop The Killing, Inc., which documents black-on-black violence and also made the cell phone footage of Sterling’s shooting public.

His stint in the Bottom Posse was likely a minor episode in his life and “2 Saggin’ Straight From Hell” hasn’t really registered in rap history. But as so often in this music, it’s the connections and the context that can renew interest in an older release. Musically it won’t be worth it, but when you consider the careers of Boosie and Gates in and outside of music, Silky Slim’s personal history with drugs, gangs, emprisonment, gory gangsta rap and doing good deeds, Baton Rouge as a place civil rights were fought for early on, the continued social friction in America, then Essential Media Group’s remastered reissue of “2 Saggin’ Straight From Hell” offers a few thinking points.