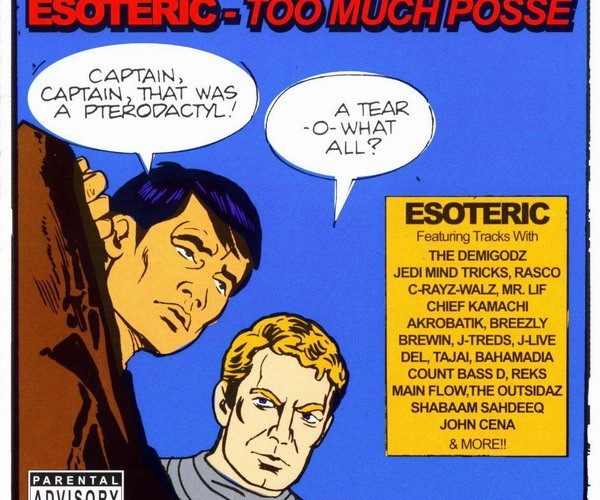 Esoteric :: Too Much Posse

Take it from the emcee himself: “Rhyming with a crew was always more fun than rhyming solo” is inscribed in the liner notes of Esoteric’s “Too Much Posse,” caught within the confines of a little essay that comprises the liner notes of this album. This disc, a compilation of his collaborations, seems to be a genuine pet project rather than a ploy to get money. He wanted this material together somewhere, so he pressed it up himself after being left unsatisfied with a disc he had initially burned.

This isn’t the most original concept for an album, but there isn’t much precedent for this type of thing, so the idea is intriguing. The tracklisting is even more tempting, as it features a cross-section of who’s who in the underground. Twenty-three tracks from the likes of Breezely Brewin, Count Bass D, Celph Titled, J-Live, Akrobatik, and even wrestler John Cena is absurd almost to the point of excess.

The coherence of a studio album must be sacrificed in a case like this. The vast assortment of artists spread out throughout, united only by Esoteric’s appearance on every song. The production, which is not noted in the liner notes, provides more unity because the mood is mostly unchanged through the recurring efforts of the likes of Stoupe and Esoteric’s partner 7L.

Die-hard fans of Esoteric and his extended family will surely own most of these tracks already. I do not consider myself devoted to him, however, so the majority of this material falls freshly upon my ears. “Pound for Pound” opens the record, and features Rasco and Beyonder. It’s a nice track, for sure, but it hints at the problems of monotony that plague the album. Esoteric comes from the battling camp of the underground, and nearly every verse that he drops on the album fits the formula. Similar to guest Celph Titled, he tends toward the brutal, faintly shocking type of rapping that is heavy on punchlines. The best early song is “Hip Hop Philosophy,” featuring Trademarc, which flaunts a crisp, smooth beat that both emcees grasp and squeeze. The moody “Global Networking,” with guests Virtuoso, Chief Kamachi, Mr. Lif, and The Prunes, stands out as well because of the production. Oddly, though, the “fun” of rhyming with a crew is not consistently evident on any of these posse cuts. Each rapper is dead bent on battling, and they all have similar styles. A sample, from Eso’s verse on the original “5 Perfect Exertions”:

“At a glance my battle stance rattles champs like an avalanche
Crabs don’t have a chance you sycophants
Spend your cash advance grabbin’ a lance
Try to joust with the conqueror
Stompin’ the pawns that sponsor ya
Onto the crucifix
I chew ya crew to bits like Mucelix or computer chips
Who can dis the pugilist?”

Technically, the words are masterfully structured and intense. The vast majority of the twenty three songs compiled here, though, contain similar sentiments. The execution is often original, but the words are ultimately empty. Rap music has been built on bragging to an extent, but an entire disc of such rambling quickly loses its charm. Esoteric and his friends can flow; that much has been established. The format hinders the music as well, because everyone is out to prove themselves on a posse cut. Therefore, originality is consistently eschewed for the more immediately pleasing sound of chest-pounding in rhyme form.

There is no outstanding lyricism, only a uniformly solid collection of similarly themed verses. The production is left to determine the best cuts. “Skitzofreniks’ State” thrives due to a repetitive but unflinching horn loop. The brief “Recognize” follows with a whining organic synth sound and earthy drums, succeeding with the rhyming compliance of Esoteric and Kabir. “Duck Hunt” has a sparse beat that generates nods, but rhymes like “I can shoot from any angle like Dirk Nowitzki” and “piss on wack rappers till I burst a kidney” are mundane and painfully average. The duck hunt metaphor is not unique to the song; shots at other rappers seem to be each guest’s main objective. Esoteric is a constant through the whole record, kicking dead serious rhymes that aim, sometimes with a touch of dark humor, at the faceless entity of other rappers. Assumedly, that means anyone who doesn’t appear on this album, because the guest list is a full catalogue of his connections.

All in all, the overkill that plagues the replay value of “Too Much Posse” is paradoxically its best asset. You are assured to encounter at least a handful of songs that you’ll want to revisit, but wading through twenty-three to find your material is the hard part. Those who dig this type of lyrical content will have fewer qualms than I do, but I suspect that the less patient of us will struggle to get through this record. Catch this one for an introduction to Esoteric and his homies, but don’t expect anything too remarkable.