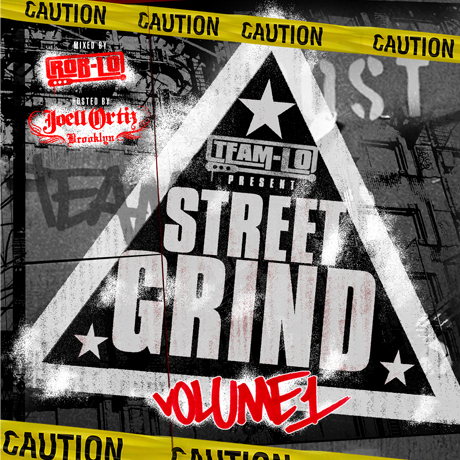 First things first: this is a mixtape and I don’t play that game. By that I don’t mean I don’t listen to mixtapes – don’t get it twisted, if it’s good I’ll listen to it – but I mean that I don’t play the mixtape game, talk the mixtape talk, stay up on who got what song from who or who disses who on whose tape. I live in Seattle where the mixtape scene is light years away from the cutthroat, no budget hustle. So I’m out of the loop. I’m easy to fool. If a mixtape “king” (they’re all kings, these mixtape masters) tells me they got an exclusive, I believe it. I’m not versed well enough in up to the minute street grind rap to really evaluate anything other than what I hear, song by song, on this mix from Violator All-Star DJ Rob-Lo.

Joell Ortiz hosts this tape, and for those that don’t know, Joell is a rapper from NYC that has appeared in almost every rap magazine as their “unsigned hype” type feature. The consensus is that he’s ready for the big time and it’s crazy that nobody’s picked him up. I agree. He sounds like Fat Joe at his more clever, raps thug but not too thug, and says funny things from time to time. He flips T.I.’s “Rubber Band Man” into “Marijuana Man” to good effect. It’s about nothing, just another piff rhyme, but Ortiz had charisma that will please those that like a little ignant shit mixed with their clever.

Rick Ross’ “Hustlin'” pops up with Busta on the track. I don’t know what to make of this cut. I guess the beat is good in a Mike Jones kind of way, but I don’t like that Rick Ross has to keep telling us that he knows Noriega, the REAL Noriega. Ross says Noriega owes him about a hundred favors. Maybe that’s true, but even if it is, I don’t care. Also, wouldn’t Noriega get pissed that Freeway-lookin’ Rick Ross was putting his name all over BET? We’ll see when he gets out of jail September 2007. Then Busta gets on the track and starts talking about his personal connections to Pablo Excobar, talking about how Escobar’s daughter hooks him up with coke to sell and whatnot. WHAT?! Busta is a coke dealer? Both rappers seem to think they are being realer than really real with their ultra-specific name-drops, but I think they are both going too far.

Busta pops up again on the cut “Yeah” where he totally rips it like he hasn’t in a long time. The track sounds like Just Blaze and Busta just blazes it, nuff said. His “Touch It” remix shows up here, but inexplicably cut into “Pt. 2” and “Pt. 3” where the girls are separated from the boys. Annoying.

Red Café is a dude I wasn’t checking for before but will now after “Bling Blao Pt. II” featuring Fabolous a real winner and Paul Wall. The song is mixtape good – not good enough to buy alone – but Red Café sounds like a natural, a real winner even next to two weathered dudes.

Nothing too amazing to look at, but Red Café delivers his lines like he’s really got something goin’ on. He gets over on his swagger.

The Busta and Raekwon song “State of Grace” is here, which is a really dope track. I hope they rap together on Rae’s album. They have a real chemistry together. Both of them step up their games when the beat is good or when their rap partner is shining. The combination is twice nice like chicken and rice.

The rest of the mixtape is NYC centered rap about rap or rap about guns. If you are in the mood for thump your chest hiphop, this is a pretty good mix of what’s new. The only things that really stood out to me were the songs that are already getting airplay, but Rob-Lo at least knows what people want to hear when they are driving around, hanging out with the boys, acting a fool. It’s a high energy mood mix, something like a rap workout tape. For what it is, it’s not bad.