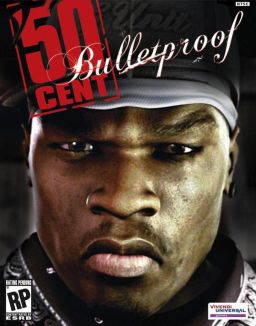 Rappers have shown love to video games since day one, from Atari to the modern X-Box and PS2 systems. Video games on the other hand rarely showed love back until recently. Despite a few rap related releases, most noticeably Wu-Tang’s fighting game, it wasn’t until the new millennium that video game makers started infusing their soundtracks with quality rap music and letting hip-hop seep into the game play. What started out as dope background music for Madden and NBA Live has quickly turned to a big cash cow for video game producers. Vivendi Universal has attempted to bring the best of both worlds together with 50 Cent’s “Bulletproof,” the first action game to feature rappers as main characters. It’s definitely a smart marketing move and one that could have taken both rap and video games to an entirely new level. Despite the rappers bringing their best to the table on this project, the video game producers failed to showcase their A-game on “Bulletproof.” So what could have been an essential game for rap fans and video game players alike is instead an okay game recommended mostly to 50 Cent fans.

The rap elements of “Bulletproof” are in full effect and are what make the game interesting. 50 Cent, Lloyd Banks, Young Buck, Tony Yayo, Dr. Dre, and Eminem all appear in the game and lend their vocals to the original dialogue. The rappers themselves are also very well represented in the digital world. Each one tends to have a unique ability which gives us a hilarious insight to their egos and perceptions of themselves. Lloyd Banks picks locks, Tony Yayo is a bombs specialist, and Young Buck is a pro at stabbing people with forks. Well actually Young Buck doesn’t stab anyone with a fork and instead – well instead I’m not really sure what Buck does other than shoot the place up and be a thug. Eminem plays a crooked cop and Dr. Dre sells guns out of the back of van. Aside from playing the role of 50 Cent in the game and seeing other rappers show up every now and then, the game also features a dope soundtrack that features instrumentals from 50’s catalog. Hate him or love him, you know 50’s beats are always on point so the soundtrack is the perfect background music. Even more enticing is the bootlegger where you can go and use the cash you collect during the game to buy 50 Cent videos and music. The game claims to possess unreleased and new music, but for the most part the new and unreleased music has been previously heard on a mixtape at some point. But even if you have every G-Unit mixtape it’s nice to have access to over 4 hours of music and plenty of videos through the game.

The video game elements of this release are what bring the game down. Vivendi Universal is a huge company and more than capable of putting out a quality product. But for every great game they release, they also drop 10 sub par titles including many horrendous adaptations of movies. It seems that for this release they went with the quick and easy approach we often see on movie/game releases. The graphics themselves are on point and look as good as any other title on the PS2. The story, while not amazingly compelling, is good enough for this game. It is in the game play where the house of cards falls in fantastic fashion. For one, the game is mostly linear with the only real freedom you get is in choosing where to shop in between missions. While linear games can still be very fun, with a self-proclaimed hustler and pimp like 50, one would like a little more freedom to shape the story and have side missions or projects to do for added motivation. The missions themselves aren’t bad though are not exactly self-evident. Early in the game when looking for safes they never tell you that over half of them are hidden. Furthermore they are hidden in very different ways. It’s not that such “puzzles” couldn’t be good, but given that the rest of the game focuses on you shooting bad guys and well, shooting bad guys, having to scan walls for hidden safe triggers is a bit unexpected. Another problem is the bad guys themselves as they are impossible to kill off completely in some stages making it easier for you to just run in do what you have to do and then get out as quickly as possible. The biggest problem lies in the game controls which only make the other problems a lot more annoying to deal with. I’m not the best gamer out there, but I can tell the difference between good game controls and bad ones. “Bulletproof” features a shoddy shooting/camera system that makes the game more difficult than it has to be. Running and shooting is very hard because of this. The control system isn’t difficult to master in the sense that it’s a challenge, instead it’s just a bad system that pales in comparison to the ones used in game’s like “GTA” and “True Crime.” With more attention, the game could have been a very enjoyable experience.

“Bulletproof” is a game that excels in infusing elements of rap into the game, even if the main focus is the abundance of music and videos. Sadly, the weak game play detracts from the overall experience of playing the game. Hardcore gamers will surely find plenty of other games on the market to be much more enjoyable and challenging. Hardcore rap fans will likely not have the patience to deal with the game’s poor controls in order to enjoy the game’s rap elements. So what’s left is hardcore 50 Cent fans who don’t mind dealing with a flawed game in order to get to the hidden and unlockable goodies.