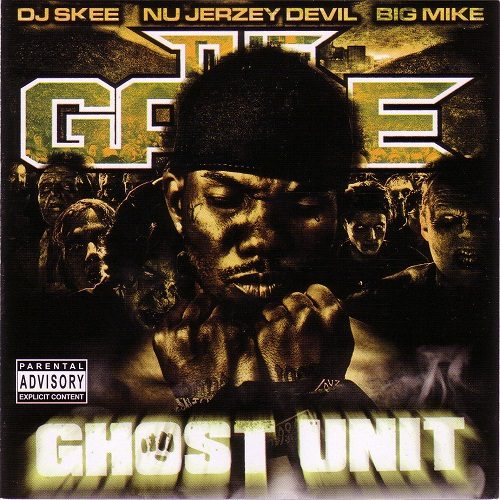 I don’t like Game. I don’t dislike him, he just doesn’t move me. It’s been this way since before all the drama/beef/ and supposedly good album. His “Live From Compton” mixtape showcased to me a very average rapper who happened to be from the west coast and liked to say other rappers’ names. Despite trying to listen to “The Documentary” once and watching the DVD of the same name, Game has yet to win me over. “Ghost Unit” does nothing to change this. Yet another mixtape dedicated to the everlasting beef he has with G-Unit, “Ghost Unit” features a few decent cuts and a lot of horrendous ones. Game fans will surely flock to this in droves, but those who aren’t 1000% fanatics may want to wait for the album to cut the fat and leave only the quality.

The CD opens up with a diss called “Ghost Unit Intro.” This time around Game’s diss consists of calling 50 and his crew “Ghost Unit” and rapping over the Ghostbusters theme song. I’m perplexed by this in more ways than one. I honestly don’t understand the diss encompassed in “Ghost Unit.” Is Game trying to say 50 and his crew are ghost from the hood? I’m not too sure, if anyone more well versed in the diss wants to fill me in please let me know. The other thing that confuses me is the tie in with Ghostbusters. Growing up Ghostbusters were cool. They were the good guys. In retrospect I see the show, like all kid’s programming, can be a bit corny to adults, but I still don’t see the diss evident in it. And finally, the Ghostbusters’ theme features some pretty cheesy music, so I don’t see how anyone could think it acceptable for a rapper to flow over it. Towards the end of the track, Game gives a young suburban white kid who listens to rap permission to call 50 a “nigger.” I won’t even comment on that.

The next track is actually pretty dope thanks mostly to a Dr. Dre beat. I’m not too sure whether “Here We Go Again” is from “The Documentary” or Game’s forthcoming album. After a fairly strong showing, Game spirals back into the abyss that is corny music by using the words from a Mr. Potato Head commercial for the hook of another G-Unit diss. How he made this track with a straight face I don’t know. Game redeems himself by including the remix to Kanye West’s “Crack Music” on the next track. This particular mix features an actual Game verse that wasn’t included on Kanye’s album and with good reason. I’m not saying Game’s verse is wack, but it definitely doesn’t fit the whole vibe of the track and pales in comparison to both of Kanye’s offerings. Another remix follows with “Kiss Your Ass Goodbye” and honestly with a beat and hook that crazy it doesn’t matter who’s spitting on the track. Despite two back to back solid tracks, Game manages to mess things up again by including a diss song by comedian Money Mike. Yep, the same Money Mike who played a pimp in Red and Meth’s “How High.” Money Mike took offense to the Young Gunz calling him a “fake ass pimp” on one of their tracks. Why an actor would get offended because someone called them fake I have no clue. Of course the real reason Money Mike is on here is because Game has beef with the Young Gunz also and wants to diss them. Despite laughing at Money Mike’s “Young Chris and Lil’ Neefie” impression, the rest of the track features wack lyrics from both him and Game.

The rest of the mixtape features mostly filler tracks from Game and his fellow west coast affiliates. None really bring anything new or inventive to the game. G. Malone seems to do his best Game impersonation on “They Sayin'” and also holds his mentor’s penchant for beef. M.O.B. drop lackluster verses on all of their performances and make you wonder why they are included on four tracks. Singer BBQ joins Game for two absolutely horrendous tracks. The only other noteworthy track is the inclusion of a remix to Nas’ “Don’t Body Yourself.”

By now, I know I’ve come off as a Game hater to most of y’all, but that’s not really the case. True his style doesn’t move me, but I can appreciate it when he does come nicely. This mixtape however holds little to be appreciated. If you take out the horrendous diss tracks and lackluster crew cuts featuring his cronies your left with 4-5 songs worth hearing – tops. Taking into account that we don’t get the complete version of “Here We Go Again,” there is very little on this CD that would make this a worthy purchase for anyone other than hardcore fans. Even though I don’t think Game is a great rapper, I know he can at least do better than this so unless you really need a fix I’d recommend waiting a couple of months or so for his sophomore album to drop.