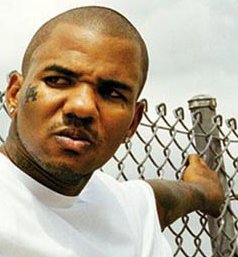 He’s baaack! The association with G-Unit is gone but if you ask The Game it never really made sense anyways, he’s always been one to stand on his own two feet. This week The Game sat down with us at RapReviews to talk about Doctor’s Advocate, the G-Unit situation, who set it up and why he knew it would fail, as well as one famous wrestler’s beef with him, and why he plans on retiring Tiki Barber style, sooner rather than later.

Adam Bernard: You have been through A LOT in-between albums. If you can encapsulate it all, what have you learned between albums one and two?
The Game: I learned that Hip-Hop is a business and it should be treated and respected as so and none of these motherfuckers is your friend so that’s why I don’t have any.

AB: So you’re through with industry friends?
Game: Yeah man, unless it’s like some direct rapper like the ones on the “One Blood” remix. Those are all guys that I made physical contact with, pounded it up, dapped it up with, smoked a blunt, or had some liquor with or just chopped it up with about some good times and Hip-Hop in general, but outside of that, the record execs, the people and all them shit? Fuck that shit. I’m Game and I’ma roll and I’ma live my life and do what the fuck I want. I’m a manage my own career cause I got this shit on lock. I can’t go wrong, I can’t be fucked with and that’s what it is.

AB: Looking back on it now, is there anything you would have changed?
Game: Hell no. Every fucked up experience breeds a happy ending for me.

AB: Did you ever anticipate the relationship with G-Unit turning sour?
Was there anything about them that you were wary of from the start?
Game: Yeah I knew 50 was a fuckin jealous piece of shit from the start but I was forced into that situation, but I knew in time I would gain some things from it and so would G-Unit and I had a wonderful time while I participated in the group but at this point I’m Ice Cube when he left NWA, man. I gotta make it happen for me now.

AB: When you say you were forced was a situation where they said they were going to put you with them to make sure you blow up?
Game: It was “we’re gonna put you with these guys and there’s a possibility that you might blow up before you’re supposed to blow up.” That was by Jimmy Iovine and it was a fuckin ingenious idea, man. Jimmy Iovine’s the fuckin brain of the whole operation. But now it’s me doing my own thing. I’m The Game, I was a solo artist then and that’s why I didn’t really fit. It’s kinda like trying to put a puzzle together you don’t have that last piece, what are you gonna do shove a piece of gum in there and mold it around the puzzle? That shit’s not gonna look right. So you’re gonna have to take that gum out and stick that gum on the wall and that’s me at this point.

AB: After everything that’s happened to you and around you these past few years what do you feel people’s biggest misconceptions are about you?
Game: I don’t even think that deep about them. I don’t give a fuck what people misconceive. Let em! I love it! As long as they’re misconceiving it about me and not another rapper I’m good.

“I think that we should just take it to Pay Per View and have a wrestling match, man, so I can fuck him up…”

AB: I read something the other day that I’m not sure if I really believe. Is WWE superstar Triple H really suing you over your name?
Game: Yeah, Triple H is tryin to sue me for “The Game.” I think that we should just take it to Pay Per View and have a wrestling match, man, so I can fuck him up because I’m not into that whole play wrestling thing. We can really take it to the streets, we can wrestle right in the middle of Compton. We can put up a makeshift ring made out of shoestrings and light posts. I’ll get in there and body slam his ass all over the place for the name.

AB: Were you ever a wrestling fan? Does this hurt you at all?
Game: I was a fan of Ultimate Warrior and Hulk Hogan, but these new wrestlers, the guy with the rappin thing with the spinnin belt and shit? I don’t know about all these guys. There’s too much fake shit. It was fake back in the day but at least they made it real. Hulk Hogan and Ultimate Warrior, Macho Man and all them motherfuckers, Sting and Lex Luger, Ric Flair, but these new motherfuckers, these Triple H’s and these… I don’t even know nobody else’s name in the new shit.

AB: Well it’s definitely going to be an interesting situation. How long do you think it’s gonna play out?
Game: It ain’t gonna do nothing but make me bigger because now I’m gonna have wrestling fans. If I was Vince McMahon I would tell him to shut the fuck up and sit down before they sell me some more albums.

AB: So could you see yourself battling John Cena, the aforementioned wrestler who rhymes?
Game: I’d kick his ass.

AB: You know he’s beefin with Kevin Federline on RAW.
Game: I might come on one day and just fuck him up for Kevin, like don’t be fuckin with us man.

“Kevin Federline is good in the hood to me, man.”

AB: Oh no, you can’t side with Kevin Federline.
Game: Kevin Federline is good in the hood to me, man. I smoked with a blunt with him before. Good folks.

AB: So you would be on his side with his whole divorce battle with Britney.
Game: Oh naw, I’ll take Britney’s side, she’s got a bigger ass.

“This album has no Dre affiliation, no 50 affiliation. I incorporated Snoop and Nas on this album. I brought back Nate Dogg…”

AB: She’s got a nicer rack, too. So talk to me about your new album, how does Doctor’s Advocate differ from The Documentary?
Game: This album has no Dre affiliation, no 50 affiliation. I incorporated Snoop and Nas on this album. I brought back Nate Dogg and Marsha from Floetry. Most importantly I’m on the fuckin album. I’m a classic MC, I kick classic shit and here’s my album number two, it’s classic.

AB: OK, so obviously no G-Unit, but you also said no Dre. When you first came out people almost co-signed on you because of those things. How do you think people are going to react now?
Game: People are already reacting. The streets don’t care. You don’t hear people saying that this album sucks. People know what this is, the most anticipated album in the world and I’m gonna sell my units with or without Dre, with or without 50, with or without anybody.

AB: You’re cool with Dre, though, right?
Game: Me and Dre are one hundred and we’ll always be one hundred for the rest of my life.

AB: So what are your goals for this album versus your last one?
Game: As long as I meet or top it I’m good.

AB: Is there anyone new you’re looking to reach?
Game: I don’t really dig that far into it like that, I just make classic music, put the shit on the shelf and let the album do what it do.

AB: I know you also have Black Wall Street. Tell what’s next for that venture.
Game: I got a kid by the name of Juice, he’s from the west coast and he’s the next up out here. Remember the name, Juice.

AB: Is that the same Juice that was winning all the freestyle battles ten years ago?
Game: No no no, ten years ago he was probably ten.

AB: I feel like I’m jumping from topic to topic here, but I know our time is limited today so I have to rush a bit. Your shoes, did you worry at all about having your kicks names Hurricane right after Katrina destroyed a large section of the country?
Game: That was a just a freak accident, it was so coincidental. We donated a portion of each sale from the shoe to Hurricane Katrina relief funds and we’re still doing that to this day although many have forgotten about Hurricane Katrina. It was an issue for about one day until we figured out a plan and we made it work.

AB: After The Documentary dropped you gained worldwide fame, make a prediction for what’s going to happen after Doctor’s Advocate drops.
Game: I’m going to Disneyland!

AB: Will you have a ride named after you, though?
Game: Probably so. So make sure you go to Disneyland and check out that Doctor’s Advocate ride.

AB: You know you sound like you’re in really good spirits. It sounds like everything that happened with you did not get you down at all.
Game: Not for one fuckin second man.

AB: Do you have a secret to life?
Game: Yeah man, a three and a half year old little boy. You gotta get you one, man, they’re the coolest little toys in the world.

AB: So in the end how long do you see yourself rapping to support your son?
Game: My whole family’s gonna be set for life and I’m not stopping rappin until that happens. I already know I got a five year plan. I’m 26 now and I’m gonna bow out on my 31st birthday. Peace, later, holla, I’m gone.

AB: So what do you think of some of the rappers who stick around into their forties?
Game: Uuuugh. Just that. “One Blood” ad-libs.

AB: I know you said you’ll bow out once your family is set, but is it also a matter of making sure that Hip-Hop still has fresh MC’s out there?
Game: Of course. That’s why I’m doing my job now.

AB: What else do you feel needs to be done to help young MC’s get to the forefront?
Game: We just gotta keep on grindin. With the new technology and all this MySpace promotion and all this shit Hip-Hop is gonna take its course.