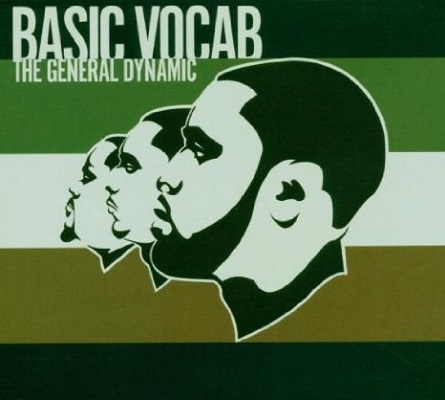 The first time I listened to Basic Vocab’s “The General Dynamic” the weather outside was hot and steamy. I was unfortunate enough to be sitting inside a hot and steamy automobile without a decent air conditioning system. While my body was taking the heat in a very literal way indeed, I was gladly surprised my auditory canals weren’t exposed to beats and rhymes that were trying to bring the heat in a figurative way. Considering the three musicians of Basic Vocab hail from the Sunshine State, Florida, it is pretty remarkable to discover such a coolant factor within their music.

First off, most of that refreshing musical breeze must be accredited to Basic Vocab’s production engine Tony Galvin. Tony G, as he is affectionately called throughout the album, manages to surprise in an area code that is so well known for its hot and heavy crunk style of music making. When you realize this production bartender provided musical cocktails for the likes of artists like Mystikal, T.I., Lil’ Scrappy, and Young Jeezy, it’s all the more surprising to listen to an album that could easily be played back on a backpacker’s MP3 player.

Galvin’s charm is that he combines classic hip-hop instrument samples with lighthearted organic beats without stepping on the gas pedal too heavily. The Florida scene does enjoy a revving engine and some burnt rubber, so it is refreshing to see a beatsmith that can be subtle without falling asleep behind the steering wheel. Sometimes the southern sunshine flavour comes out of the woodwork when a Cuban piano riff does a ‘Guantanamera’ alongside the mellow drum pattern on “It’s Alright.” The infectious “Likeness” has a Latin trumpet eruption to enrich the drum pattern in third gear. It all adds to a southern flavour that contains extracts of Sergio Mendes and Ali Shaheed Muhammed.

Some have jumped the gun and compared Basic Vocab to A Tribe Called Quest, the group Shaheed Muhammed once belonged to. Comparing “The General Dynamic” to any album ATCQ put out would be like comparing a diesel engine to a V8 muscle machine. This is mostly due to the lyrical capacities of the two MC’s Basic Vocab has to offer. Perhaps coincidental, but the vocabulary of JL Sorrell and Mental Growth is as basic as they come.

Their main fault is that they lack the ‘nitro injection’ that’ll win them the race when competing with other lyricists. JL Sorrell and Mental Growth both have a tight mic delivery, that is eerily similar to one another. The best duo MC’s sound alike somewhat to give the listener the feeling they are listening to a group performance, but these two Florida cats could be twin brothers with their interchangeable voiceboxes. Most acts have a lisp, growl, whisper or accent, but JL Sorrell and Mental Growth possess none of those traits.

When it comes to lyrical content, Basic Vocab does not set new standards of originality. The MC’s speak their mind on the current state of the game without using vivid storytelling or fine tuned metaphors. When they discuss bringing hip-hop back to the good old days on “Ease Back,” it results in lyrics like:

“Moving back to them good old days when it was like that
Lyrics was packed with substance and a tight track
You bring it weak, I bring it right back
And I give you the current state of the game, but take the nightcap
And I will rectify the situation
Keep declined MC’s back and forth pacing
Thoughts wasted on potential devastation
Like when Vocab rocked the spot across the nation”

That doesn’t sound bad at all, but if these vocals were magically changed into a car model, people would hardly notice it passing them by in the street. The engine would sound average, metallic blue instead of race car red on the outside, and the rims would be factory models. I’m not saying every act should try to be a race car red, but when you’re an act from sunny Florida, a little bit of spicing up your act would certainly do the trick.

Considering its origins, “The General Dynamic” is a refreshing breeze on a hot day at the beach. Tony G. is a talented producer with a full understanding of the artist he is working with. Basic Vocab’s lyricists, on the other hand, need some fine tuning to make them a bit more noticeable in the crowded scene.