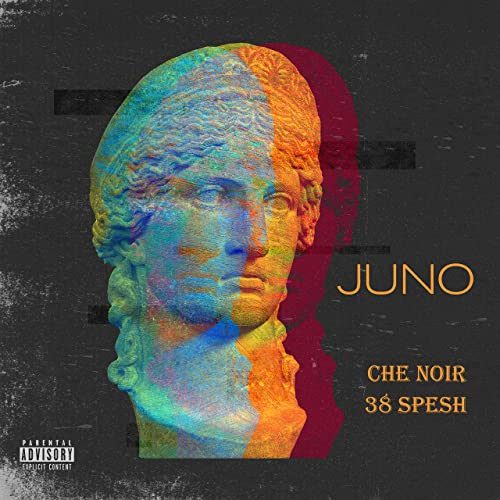 “I’m cool under pressure, I don’t even sweat near the fire”

Che Noir’s peers describe her this way: “She a nerd, she rap, she got a jump shot.” That may at first seem like a bizarre compliment. Outside of the nerdcore genre, most emcees don’t want to be called a “nerd,” and even some in the genre don’t like it being called “nerdcore” since they feel it’s too limiting. For Che though it’s a badge of respect given she rolls with 38 Spesh and his crew of upstate New York artists. They have a lot of hard rocks and old school “men of respect” who talk a lot of shit and TAKE none. For her to be called a “nerd” on “Juno” is shorthand for “This lady is smarter than us.” Then they add “she rap” and “she got a jump shot” to reinforce that even though she’s that smart, she’s just as much of a street hard rock as they are.

Her own website doesn’t pull punches either, describing her as “exactly what the world needs” and as an artist who “brings light to issues that need discussing, especially in the current state of our nation.” That is a lot to carry, but heavy is the head that wears the “Crown” and she shares that load with Planet Asia and Street Justice above. That doesn’t mean she can’t handle the weight though. Che goes hard and fast on “Queen City” and 38 Spesh providers her with a lovely instrumental to do it. “Sometimes life is a bitch, give a hug and kiss/when she gone, life is a bitch you don’t wanna miss.”

Che Noir hits closer to the truth than she may have even intended with those words. Her voice is warm and friendly and she speaks with an earnest frankness on songs like “Fruits of My Labor” when she says “I got love for the hood, but I hate it here/and can’t relate to niggaz who wanna stay in here.” That honesty is infectious, and it makes you love her, but at 22 minutes long she’s quickly gone on “Juno” and leaves you wanting more. I suppose that’s not a bad thing, but at a time where intelligence and honesty seem to be in short supply (particularly in politics) anybody who gives you what you crave makes you even thirstier to drink from their cup again. Fill me up Che.