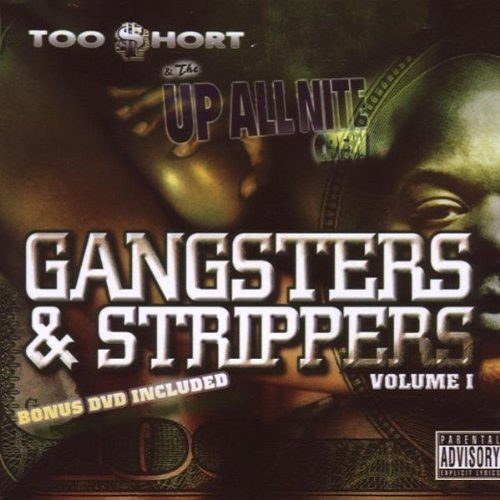 Too $hort continues to tease the release of a new album and not deliver. Fans have been waiting for an official album since 2003’s “Married to the Game,” but the closest we’ve come since then is this year’s “Pimpin’ Incorporated” mixtape. The latter was packaged with a DVD as a “bonus disc” and on it Too $hort repeatedly asserted that it wasn’t a real album, although it contained a lot of new material for $hort fans to sink their teeth into along with some material excised from other sources.

With “Gangsters & Strippers,” Too $hort is starting to venture into strange territory. If Short Dawg were in fact one of the many “bitches” he’s rapped about over the years, one might say he’s turned into a cock-tease hoe – always promising the goodies but leaving you frustrated and pissed at not getting what you really want. This is packaged like a Too $hort album, features Too $hort’s name prominently everywhere, has several songs that are solo outings by Too $hort and even has new “Up All Nite” label stamp on it. In fact an electronics store employee swore up and down to me that this was in fact “the new Too $hort album” because of it, and without bothering to examine the album closely.

Let me be perfectly clear that this is not the case. If you buy “Gangsters & Strippers” you are not buying the long-awaited and repeatedly promised official new full-length Too $hort album. The songs which feature Too $hort on his own do sound like they’d belong on such an album, but on an 18 track album they are too few and far between. The title track, which is also the opening song, happens to be one of them. Near the end of the album “Show Me How U Do It” also finds Todd Shaw flexing on his own, travelling around to all points outside Oakland to find women with the fattest asses and nastiest dances. The rest of this album finds him either rapping in concert with a bunch of lesser-knowns and no-names or being conspicous by his absence.

It’s probably unfair to put anybody looking for their big break on an album where people expect Too $hort and are dissapointed by anything else. Then again these rappers had the choice whether or not to be on this compilation, and none of them show the musical strength to be featured outside of one. The closest to achieving the next level would be a group that’s labelled “The Pack” but refer to themselves as the Wolfpack on their tracks. None of them are individually strong lyricists but on songs like “Booty Bounce Bopper” and “Fight Fair” they at least work well together in concert, especially over the Lil Jon styled beats of the latter track.

The rest of these artists need some serious help. The uncreatively named Murda Mob spit gangster rap cliches on songs like “Come and See About Me” and “What’s That About,” sounding like a lesser version of Three 6 Mafia lyrically and musically. Both groups give their members solo tracks which are a musical mistake, and the other artists on this compilation are so uninteresting they don’t even merit mention. Unless you are really bored or desperate to hear a couple of new Too $hort songs and a lot of cameo appearances by him on mediocre rapper’s tracks, “Gangsters & Strippers” is not an album you really need in your collection. Hold out for the real new Too $hort CD when it’s finally released this year – after hearing this album I wish that I had done the same.